Ruin & Rule by Pepper Winters is releasing tomorrow! Read an excerpt and enter the giveaway below!

“We met in a nightmare. The in-between world where time had no power over reason. We fell in love. We fell hard. But then we woke up. And it was over . . .”

She is a woman divided. Her past, present, and future are as twisted as the lies she’s lived for the past eight years. Desperate to get the truth, she must turn to the one man who may also be her greatest enemy . . .

He is the president of Pure Corruption MC. A heartless biker and retribution-deliverer. He accepts no rules, obeys no one, and lives only to reap revenge on those who wronged him. And now he has stolen her, body and soul.

Can a woman plagued by mystery fall in love with the man who refuses to face the truth? And can a man drenched in darkness forgo his quest for vengeance-and finally find redemption?

The joy at having my eyes freed came and went as blazing as a comet.

Then my life ended as our gazes connected.

I have green eyes.

Down and down I spiraled, deeper and deeper into his clutches.

My life—past, present, and future—lost all purpose the second I stared into his soul.

The fear I’d been missing slammed into my heart.

I quivered. I quaked.

Something howled deep inside with age-old knowledge.

Every part of me arched toward him, then shied away in terror.

A nightmare come to life.

A nightmare I wanted to live.

If life was a tapestry, already threaded and steadfast, then he was the scissors that cut me free. He tore me out, stole me away, changed the whole prophecy of who I was meant to be.

Jaw- length dark hair, tangled and sweaty, framed a square jaw, straight nose, and full lips. His five‑o’clock stubble held remnants of war, streaked with dirt and blood. But it was his eyes that shot a quivering arrow into my heart, spreading his emerald anger.

He froze, his body curving toward mine. Blistering hope flickered across his features. His mouth fell open and love so achingly deep glowed in his gaze. “What—” A leg gave out, making him kneel beside me. His hands shook as he cupped my face, his fingers digging painfully into my cheekbones. “It’s not—”

The moment my voice webbed around us, storm clouds rolled over the sunshine in his face, blackening the hope and replacing it with pure hatred.

He changed from watching me like I was his angel to glowering as if I were a despicable devil.

I shivered at the change—at the iciness and hardness. He breathed hard, his chest rising and falling. His lips parted, a rumbling command falling from his mouth to my ears. “Stand up. You’re mine now.”

When I didn’t move, his hand landed on my side. His touch was blocked by clothing but I felt it everywhere. He stroked my soul, tickled my heart, and caressed every cell with fingers that despised me.

I couldn’t suck in a proper breath.

With a vicious push, he rolled me over, and with a sharp blade sliced my bindings. With effortless power, so thrilling and terrifying, he hauled me to my feet.

I didn’t sway. I didn’t cry. Only pulled the disgusting gag from my mouth and stared in silence.

I stared up, up, up into his bright green eyes, understanding something 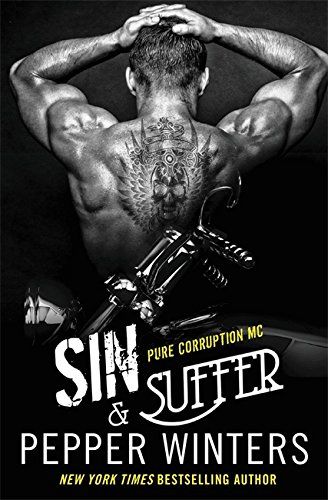 Pepper Winters is a New York Times and USA Today international bestseller. She loves dark romance, star-crossed lovers, as well as the forbidden and taboo. She strives to write a story that makes readers crave what they shouldn’t, and delivers complex plots and unforgettable characters that keep readers talking long after the last page is turned.

On a personal note she loves to travel, has an addiction to creme brulee, and is married to an incredible Canadian who puts up with her endless work hours and accompanies her on signings. She’s also a firm believer that the impossible can become possible.