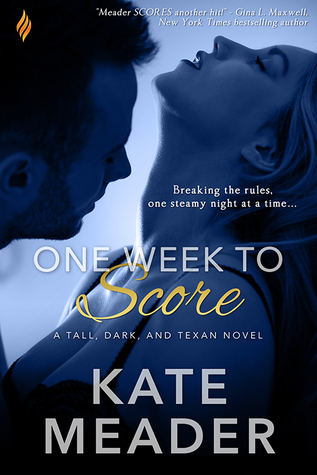 One Week to Score by Kate Meader
Series: Tall, Dark, and Texan #3 (full reading order below)
Publication Date: July 11th 2016
Links: Ebook • Paperback • Goodreads
Source: I received an ARC from the author in exchange for an honest review

He’s the man she loves to hate…

Olivia Kane’s wedding day has just imploded spectacularly. Shots lined up at the bar? Bring it. Hot stranger on the hook? Come on down. What this party does not need is six feet and change of home-grown Texas cockiness in the form of her brother’s best friend, the man who broke her heart seven years ago.

She’s the woman he has to have…

Flynn Cross won’t stand by while Liv finds sensual solace in the arms of a stranger, not when his own hard-for-her body is more than up for the task. For one week, he’ll make her honeymoon-for-one a sizzling party for two.

Breaking the rules, one steamy night at a time…

But the taboo they’re breaking is only the beginning…and Flynn’s part in Liv’s wedding debacle could bring about their end.

Kate Meader never disappoints with her hot and fun contemporary romances! One Week to Score is really the perfect steamy, summer read – it’s got fun characters, a scorching hot chemistry, and an amazing enemies-to-lovers romance you can’t get enough of. It’s quick, light-hearted, and did I mention sexy? So yeah, if you’re in the mood for something to escape to for a little while, this book would be it.

Olivia Kane used to have a huge crush her brother’s best friend, Flynn Cross, and they were good friends… until Flynn up and dumped her and never talked to her again. Years later, Olivia’s about to walk down the aisle to another man – except it turns out her fiancé is a lying cheat. Humiliated and angry on her wedding day, Olivia flies out to her honeymoon with the plan to sleep her way out of her misery. Any gorgeous man will do… but what happens when her former crush and friend, who she now hates, shows up?

“You were off-limits then for a whole host of reasons but now, I’m taking what belongs to me.”

Flynn has always known he’s never been good enough for Olivia. She was the only woman he ever cared about, but he chose to stay away from her when they were younger. Now, things are different, and Flynn’s not about to let Olivia have a fling with a random stranger when he’s there and perfectly willing to let her use him to her heart’s content. But this is Olivia, and despite all the years apart, Flynn finds himself falling fast and hard for her all over again. What happens when the seven-day honeymoon is over and they have to return back to reality?

“You slay me, Liv. Into little pieces. Always have.”

I had SO much fun reading One Week to Score. It was entertaining from start to finish – I LOVE enemies-to-lovers romances, and this was one I didn’t want to put down. Both main characters were well-written and the tension and banter between Flynn and Olivia really had me going. I almost wish the book were longer, because the story went by so fast! If you’re a fan of the author, or the older brother’s best friend/enemies-to-lovers tropes, then I highly recommend giving One Week to Score a try! 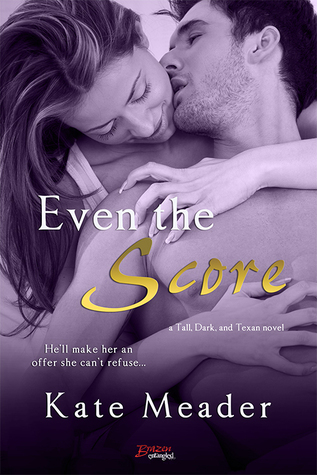 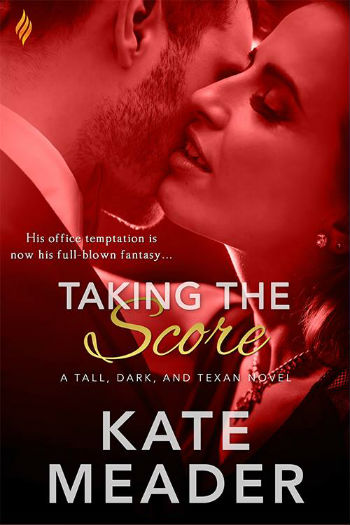 4 thoughts on “Release Day Review: One Week to Score by Kate Meader”