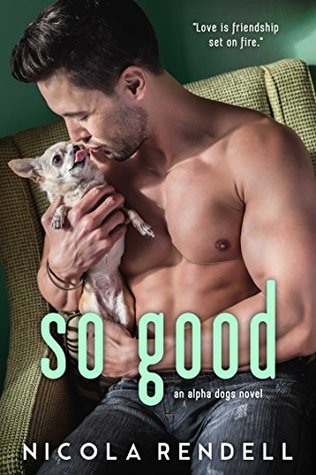 On the roof of a house outside Truelove, Maine, master carpenter Max Doyle looks down through a skylight and sees the most beautiful woman he’s ever laid eyes on. She’s naked, she’s gorgeous, and everything about her is perfect, down to the ball-busting tattoo of a rose that wraps around her hip. But it isn’t just any woman making his knees buckle. It’s his best friend, Rosie Madden. And as he stands there, mesmerized and precariously close to toppling off the roof, he knows he’ll never, ever be able to look at her the same way again.

Rosie can’t help but notice that Max is suddenly acting very strange—lots of long stares, totally tongue-tied, and not at all like the slightly cocky hunk she’s proud to call her best friend. She can’t figure it out, until later that night when Max rescues her from the world’s worst date, challenges her to a game of pool, and shows her just exactly what she’s got him thinking about. Repeatedly.

But life is complicated. Rosie’s cat, Julia Caesar, wants to eat Max’s dog Cupcake for an afternoon snack. A dream job threatens to pull them apart. And another glance through the skylight changes everything, one more time. Yet try as they might, they can’t go back to being just friends, because falling in love with the one you’ve always adored?

It feels so good.

It seems I rarely give out 5 stars these days, but THIS BOOK, y’all. I simply adored everything about So Good. It was pretty much the PERFECT best friends to lovers romance. I haven’t read a book with this trope in a while, especially one that was this good. I adored the main characters, the humor had me giggling like crazy, and there are DOGS!!! Seriously – So Good is sweet perfection. If you’re in the mood for an adorable romance that will leave your heart happy and you smiling like an idiot, then you have to read this book!

Rosie and Max have been best friends for decades. They’ve never even thought about taking their relationship anything further than friendship, and that’s been perfect for them all these years. Except while Max is up on Rosie’s roof, helping her fix up her newly inherited house, he happens to glance down and see a gorgeous, stunning, beautiful naked woman… who is none other than his best friend. Now he can’t get her body out of his mind, and wondering what it would be like to be more than friends… because he knows that if there’s a woman out there that’s perfect for him, it’s Rosie.

In that moment, I knew that what had happened hadn’t been a fucking one-time sucker-punch lightning strike. It hadn’t just been that I saw her naked and got swallowed up by desire. It was real, and it wasn’t sudden at all. She really was the most beautiful woman in the world. I’d always wanted her. Only now, I knew what I wanted.

To say Rosie is shocked when Max, her very best friend, makes a move on her is an understatement. But Max is the very best man she’s ever known, and the lust he ignites in her is incendiary. Who knew they’d have such incredible, carnal chemistry between them? Rosie can’t help but give in (I would too, girl) and discovers that maybe the best thing to happen to her has been hiding under her nose all along.

“Tell me.”
“I want to take you hard, and I want to make you mine. Tonight and every night.”
“Who says I’m not yours already?” she said, all breathy, as her hand slid around to my ass, and her fingers moved into my pocket. “Who says I wasn’t yours all along and just never knew it?”

Max, Max, Max. I was the literal definition of the heart eyes emoji while reading this book, and it was all because of our hero Max. The way he realizes he’s always been in love with his best friend SO swoonworthy. I love the way he is around Rosie – he’s head over heels for her, endlessly supportive of her, and can dish out some dirty talk like no other. Oh, and did I mention the fact that he adopts an adorable, tiny Chihuahua and names her Cupcake!? HOW CAN YOU NOT LOVE THIS MAN.

This is actually my first Nicola Rendell read, but it certainly won’t be my last. I’m eagerly awaiting the rest of the Alpha Dogs series and can only hope the next book will be about Fletcher (and his dog Captain). I honestly haven’t felt so happy while reading a book while I did So Good. It is perfect, adorable, and EVERYTHING!

Now here’s an excerpt from So Good! ❤

​As I unlocked the door to my houseboat, I heard it. At first, it sounded like a duck paddling, but then I heard something else—a panting, or a gasping. For a second, it died down. It didn’t worry me, really, because the docks were full of weird noises, and boats were noisy as fuck. But I turned the deadbolt turned, the sound got louder and more frantic. Whatever it was, it didn’t sound good and it sure as hell didn’t sound like a duck. I let my work belt slide off my shoulder onto the deck, and looked down in the water, gripping the taffrail. There in the shadows, gasping, paddling, and panicking, I saw something small and wet and terrified.

​Holy fuck. It was a dog. A tiny, drowning dog.

​Fully clothed, boots on, I jumped into the water off the sternside. I plunged in deep, submerged in a world of shadowy barnacle-crusted dock pilings and chains holding anchors far below. Holding my breath and looking up toward the sunshine, through the bubbles that came down with me, I saw it. No bigger than a chicken, and kicking hard. I breaststroked toward the dog, aiming to come up right below it, but the salt water stung my eyes, and I closed them out of reflex. When I surfaced, it had gotten a few feet away. It was just a tiny thing, soaking wet, sucking in terrified breaths. It doggy-paddled in circles, slipping down into the water so that only its nose was above the surface. I did one strong breaststroke, but it was in full flight-or-fight mode, absolutely fucking petrified, and it paddled away from me, slipping out of my grasp. With one more big stroke, I had it, and I scooped it up into my arms to held her up out of the water, the way people do when the hold babies in the air. I saw it was a girl, her tummy soft and much less furry than the rest of her. Her big black eyes bugged out for an instant, and then…

She went limp in my hands. Lifeless, with her feet dangling down, her tongue hanging out. Her eyes were closed. On my palm, I couldn’t feel a heartbeat where I was sure there should have been one thrumming along.

​I gave her a shake, but she dangled like a rag doll.

I held her out of the water, keeping her in a tight bicep curl over my shoulder. Carefully, I maneuvered under the jetty that led to my boat. I got a toehold on the old dock ladder, rusty and unsteady. Using one hand to climb up, and using both boots like climbing picks, I emerged from my boat’s shadow and out into the sunshine of the dock. I laid her down on her back, supporting her lifeless body. With every passing millisecond, my heart fucking broke more and more. I could not let this happen. I could not let her die. I pulled myself up all the way and knelt beside her. She was flat on her back, with no signs of life at all. Her arms were limp at the wrists, and her paws dripped onto the dry wood beneath her. Still, her tongue hung out. Still, her eyes were shut. Still, she wasn’t breathing.

Somewhere, buried deep in my memory, I remembered learning the basics of canine CPR. I felt like maybe it was in my lifeguard class when I was in high school, but I didn’t fucking know and it didn’t fucking matter. All I knew was I had to do something, and fast. So I did. I wrapped my fingers around her tiny muzzle and brought my lips to her leathery nose. I blew gently, and as I did I felt her chest swell up. I held my own breath and prayed for anything, any sign of life, but there was nothing. Lightly, with the tips of my fingers, I did compressions on her soaking wet fur. One. Two. Three. And then I did another breath. One. Two. Three.

“Come on, little lady,” I whispered, and rolled her onto her side. I gave her a few pats, firm but not too hard. She was absolutely tiny—from scruff to tail, hardly bigger than the span of my hand. I rolled her over onto her back again and gave her one more breath, all the while going through the paces of what the fuck to do if this didn’t work. I had no goddamned idea whatsoever where the vet was. Did we even have a vet? Would she survive that long? What the fuck was I going to do?

But as I started the next set of compressions, she coughed. She actually coughed, like a tiny person, a gasping choking hack, accompanied by a few mouthfuls of water spilling out onto the wood planks.

I froze with my hands just above her tiny body. Her strange, buggy eyes opened up and she started panting hard.

“Hey, hey!” I scooped her up in my arms, cradling her to my chest. I could tell by the way she was so limp against me that she was exhausted. Keeping her close to my body, to keep her warm and safe, I scratched the fur at the back of her neck, her tail started to wag. But she was also shivering hard, and I didn’t like that one bit.