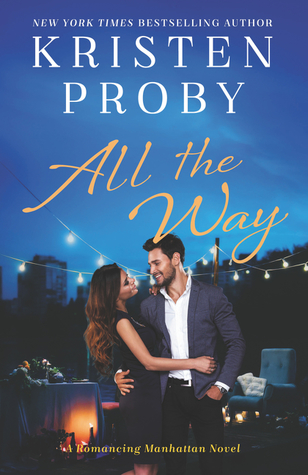 All the Way by Kristen Proby
Series: Romancing Manhattan #1
Publication Date: August 21st 2018
Links: Ebook • Paperback • Audible • Goodreads
Source: I received an ARC from the publisher in exchange for an honest review

In New York Times and USA Today bestselling author Kristen Proby’s brand new Romancing Manhattan series, three brothers get more than they bargain for as they practice law, balance life, and navigate love in and around New York City.

Finn Cavanaugh is known for being a force to be reckoned with in the courtroom. He owns a successful law firm with his brother and brother-in-law in Manhattan. On the rare occasion that he has down time, he spends it at his home in Martha’s Vineyard. But when Finn’s troubled niece goes to stay with him for the summer in Martha’s Vineyard, he’s reluctant to take time off from work. That is, until he meets his beautiful new neighbor, London.

London Watson is a Tony Award winning actress on Broadway. When tragedy strikes her family, leaving her alone and injured, she flees Manhattan for Martha’s Vineyard. Hoping she can figure out how to pick up the pieces of her life, London is convinced that she’ll never be able to return to the stage. But when she meets the charming young girl next door and her sexy uncle, they soon lure London out of her shell as she finally begins to heal from the wounds of her past.

But when London feels confident enough to return to the spotlight, she’s dealt another devastating blow. Will the newfound love between London and Finn be enough to conquer all? Or will it be over before it has a chance to grow…?

All the Way is the first standalone in Kristen Proby’s Romancing Manhattan series featuring a Broadway actress and her new, sexy neighbor. After a tragic fire kills her parents and leaves her with a broken leg, London can’t go on stage anymore and flees to Martha’s Vineyard to heal, both inside and out. There, she encounters Finn and his adorable but acting out niece, and finds that as she heals, maybe she does have room in her heart and life for love.

I struggled to connect with Finn and London, though I did enjoy their story. I think what mainly threw me off was the prologue, when Finn asks London out to dinner right after he’s read her parents’ will. Yeah… not appropriate at all. I had to double check the blurb to make sure he was actually the hero when I read that. After that, it seemed like that whole scene was ignored and the story continued on as usual but it put a damper on the hero in my eyes. Thankfully, I enjoyed Kristen Proby’s writing and would definitely give the rest of the Romancing Manhattan series a try!

If you’re a fan of this author, you will probably enjoy All the Way more. Though I would skip the prologue 😂 London is a self-assured, independent woman while Finn is older and protective of her. The book is full of sexy and sweet, with a little drama at the end. If that sounds right up your alley, I say go for it!

One thought on “Release Day Review: All the Way by Kristen Proby”