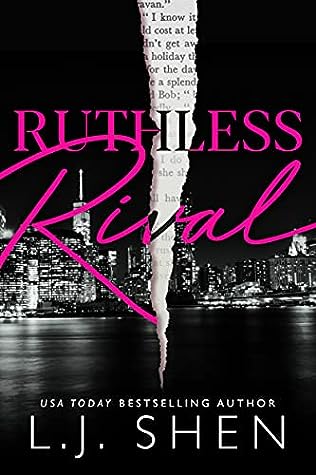 When she was young, Arya Roth became best friends with her housekeeper’s son. Soon, friendship turned to young love, and when Arya dared him to kiss her, a chain reaction of disastrous events led to the boy being sent away and out of Arya’s life.

Now, two decades later, Arya is an on-the-rise publicist with her beloved father as one of her biggest clients. So when her father is sued by a former employee, Arya sets out to prove that her father is not the monster he is accused of being. The only problem is the attorney who is determined to destroy her father’s good name. Christian Miller is charming, ambitious, and devilishly good looking, and Arya has no idea he is that same boy who kissed her all those years ago.

Past and present collide as Arya falls hard for Christian. But when she finds out who he really is and about his obsession with getting revenge on her father, can she choose love over family?

There’s no one who does enemies to lovers quite like L.J. Shen.

I’ve been dying to read Ruthless Rivals since I first heard about it and read the blurb! It’s got childhood friends to lovers, second chance romance, and of course, enemies to lovers. Arya was the rich girl from a powerful family, Christian was the poor boy from the wrong side of the tracks who was sent away and built a new life for himself. Now they reunite – her an on-the-rise publicist whose father is being sued, him a ruthless lawyer set on destroying her father – but she has no idea who he used to be to her.

As soon as Christian and Arya meet as adults, there are fireworks between them. The romance has L.J. Shen’s iconic banter, especially from the hero’s dirty mouth. If you’ve read and enjoyed the author before, you’ll pretty much know what to expect, because she doesn’t hold back from the chemistry or steam.

Ruthless Rivals will have you on the edge of your seat. It’s not necessarily suspenseful, but there’s so much good tension between the main characters, from all of Christian’s lies and his quest for revenge against Arya’s father. Everything gets twisted and addicting and I really enjoyed how everything played out!