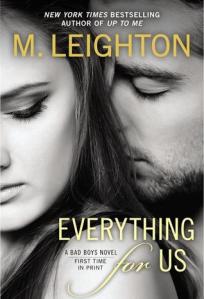 When it comes to passion this hot, it’s all or nothing.

Olivia Townsend’s wealthy cousin Marissa had everything a girl could ask for—a great job, a privileged life, and all the friends she wanted. Or, at least, all the friends money could buy. But one case of mistaken identity has turned her privileged world upside down.

An abduction gone wrong lands her right in the lap of the sexiest, most dangerous man she’s ever met. To Marissa, he’s an enigma, but one to whom she’s irresistibly, inexplicably drawn.

With him comes a new world of freedom and passion, of dark shadows and dangerous secrets, a world where nothing is what it seems—except for the blind passion that Marissa can’t escape—or maybe even survive.

Even though I don’t spoil anything for Everything For Us, there WILL be spoilers for the previous two books, so be forewarned!

I’d been eagerly awaiting this new release because I’m a huge fan of the series. I mean, come on, it’s called The Bad Boys series, so how could I not love it? The romance in the previous two books is so thrilling and exciting, and Everything For Us is no different, even though it focuses on a different couple. So it’s goodbye to Cash (!!) and Olivia, and hello to Nash and Marissa.

As much as I adored Cash and his bad boy-ness, I had even higher expectations for Nash. He seemed to be even more bad, dark, intense, and might I even say, sexy. And in Everything For Us, he absolutely lived up to my expectations. *Sigh* Nash. I loved him. He’s just so totally Alpha-male and in complete control of everything that you can’t help but fall for him. And you also can’t help but feel for him once you find out how he came to be such harsh, dark person. He went through such hell during his exile for seven years, and he was only a teenager when everything went bad for him! He was dealt with horrible circumstances, and tried his best to do what he had to do to survive, even if it turned him into a not-so-good man. It was sad though, seeing how beneath all his revenge for his dead mother, he was just a lonely man. He doesn’t trust anybody, not even his twin, and he has no one he can really count on. And it’s so gratifying and satisfying to see him finally falling for a woman he can trust his heart to.

Of course, it’s not that easy for Nash, the stubborn man he is. He really, really resists letting his heart get anywhere near Marissa. Which was a bit frustrating. A lot of the time, I was just thinking, Just admit your feelings already, Nash! Grrr. But despite all this, he’s still one delish man. He’s protective of those he loves, and knows how to be deadly enough to protect them. And he’s so determined! When he wants something, there’s absolutely no stopping him from going after it. *Swoon*

Marissa turned out to be someone that I really, really liked. She was a horrible bitch in the other books in the series, but an abduction is sure to change anybody, including Marissa. Throughout the book, I started liking her more and more, every time she’d stand up for herself against her father. I felt for her when she realized that because of who she’d been in the past, just like Nash, she really has no one to be herself with. So of course these two scarred, lonely people would gravitate towards one another to try to find a little bit of happiness.

Everything For Us didn’t disappoint. There was sweet and tender, there was sexy and thrilling, and there was action and suspense. Everything connected so smoothly, and the characters stand out so well. The romance was a bit slow,though, but I enjoyed it nonetheless. I highly recommend this series, and I’m really hoping for a book for Gavin! *fingers crossed* 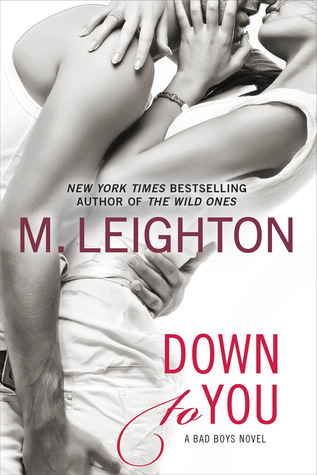 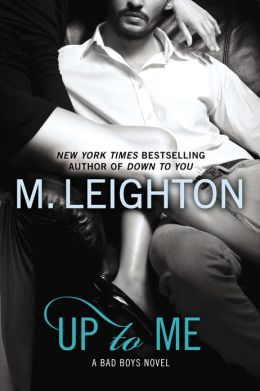 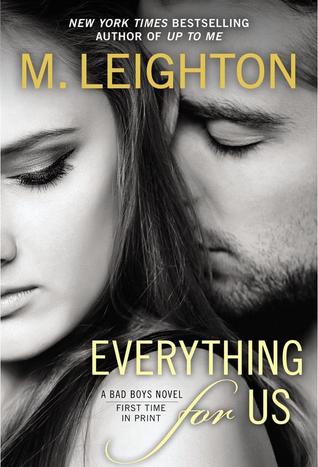 One thought on “Review: Everything for Us by M. Leighton”