Jessica Sweet thought going away to college would finally make her free of her parents’ constant judgments and insistence she play chastity club role model for their church events, but if anything, the freedom has made her realize she can’t go home and be a hypocrite anymore. Tired of dodging their questions, she stays at school over the summer and lands in an unexpected crash pad: Riley Mann’s house.

Sarcastic, cocky, and full of opinions, Riley is also sexy personified with tattoos and biceps earned from working as a roofer all day. Not the right guy for her even if Jessica was looking for a relationship, which she is definitely not. But Jessica knows that Riley hides the burden of having to raise his younger brothers behind that grin and as she helps him get his house in order for a custody hearing, they begin to fall hard for each other, and she is forced to question what she’s hiding herself.

Jessica has never had a problem getting naked with a guy, but when it comes to showing Riley how she truly feels inside, her fear of rejection may just ruin the best thing—the best guy—to ever happen to her…

I’ve never read a book that made me change my mind so drastically about how I felt about the characters! I honestly hated the characters at the beginning, but later on, as I kept reading… they grew on me, and I started to care for them, and even love them. I haven’t read the first book in this series yet, but now I’m definitely going to, and I’m so looking forward to the next book!

I didn’t click with the beginning of the book. At all. Jessica and Riley were both huge jerks to one another, and I was wondering how on earth either of them would fall in love with each other. But… as I kept reading, they became less harsh and mean, and more snarky and sarcastic and funny. The more I read, the more I fell in love with them and became invested in their story and their HEA.

Jessica is a party girl whose parents are very religious. They push her to be someone she’s not, and she wants to get away from them. In comes Riley, the older brother of Jessica’s best friend’s brother. He offers her a place to stay at his house he shares with his younger brothers, despite the fact that the two of them hate each other. And sparks fly! The tension between the two of them is high, but what I loved was the constant humor and camaraderie between them, all the while pretending to still hate each other. They didn’t jump each other’s bones or give in to their lust. They slowly became friends, got the chance to know each other better, without the complication of sex.

I totally fell for Riley. He was hard to like at first (I just do not like jerk-y boys!), but as we get to know more about him… *swoon*. He’s the oldest of the four Mann brothers, and he’s had to take care of them all since their parents died a while ago. He took on the burden of three younger brothers without complaint, giving up everything for them. And if that doesn’t make you love him, I don’t know what does. He’ll do anything to make sure his brothers live the good life he never had, working nonstop to provide for them. He may not be a perfect adult model figure, but he loves his brothers with all his heart.

Jessica is hilarious! I found myself laughing hard at random parts of the book because of her, and laughing even harder at Jessica and Riley and their antics. The things they do are so adorable and I loved them together. They complemented each other perfectly, balancing each other’s traits and faults. And for a major part of the book, they still haven’t gotten together yet! Even though them getting together would be the cutest thing in the world, I was glad they took it slow. But once they realize how much they care for each other, and how much they want a relationship to happen, it’s perfection. I honestly loved every part of their relationship. Jessica’s not afraid to admit that Riley is different from the tons of other guys she’s hooked up with, and Riley is the sweetest boyfriend ever. There are a few misunderstandings, of course, that strain their relationship, but I had no worries.

I highly, highly recommend this for contemporary romance lovers. The name of the book absolutely does justice to the story. Although you probably should start with the first book in the series, unlike me. 😉 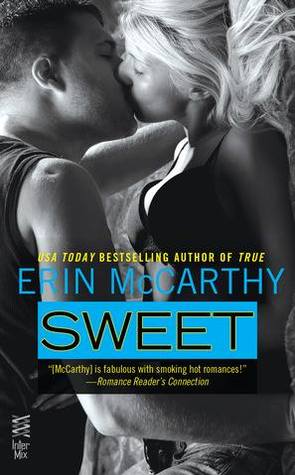 One thought on “Early Review: Sweet by Erin McCarthy”