Click the banner to see the rest of the tour stops! 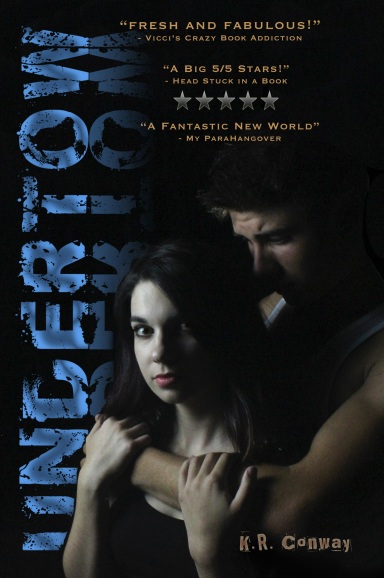 Luckless Eila is unknowingly the last of her kind: Rare. Gifted. Breakable. Stunning Raef is her kind’s historic enemy: Soulless. Lethal. Lost. A legendary death 160 years before would set their lives to collide, forcing a beautiful killer to become a savior, a simple wallflower to become a warrior, and ruthless destiny to become a death sentence.

SUMMARY:
High school senior Eila Walker knows that good luck skips over her like an Easter Bunny on Speed. So when she inherits her grandmother’s million-dollar Cape Cod home, she is downright shocked. And yeah, her new town isn’t perfect: the cheerleaders are heinous clones, the local undertow can kill ya, and her Great Grams was supposedly fried by lightning in the harbor square. Still, Eila is hopeful her luckless days are in the past . . . until history decides to repeat itself.

A self-proclaimed loner and previous-social reject, Eila thinks she’s hit the jackpot when drool-worthy Raef O’Reilly becomes her friendly, yet weirdly protective shadow. But being hauled beneath the waves by an unnatural undertow slams the brakes on bliss – especially when Raef storms to her aid with coal-black eyes and iron-like strength.

Eila, entirely freaked, demands an explanation and Raef comes clean, revealing that neither of them are average humans but rather the genetic remnants of an angelic pissing-match gone wrong. Eila supposedly can channel the power of human souls, while Raef is quite adept at stealing them. Even worse, the legend about her ancestor isn’t such a myth, since Eila’s grandmother was one kick-ass warrior until her lightning-like power backfired. A power that is written all over Eila’s DNA.

Now sought by Raef’s own family for her destructive ability, Eila must trust him to watch her back. But when a quest for information goes terribly wrong, Eila is suddenly left with only two options: become a weapon for the enemy or follow in her Gram’s fearless footsteps to save those she loves. Unfortunately she needs a willing enemy to ignite her suicidal energy and the only one she trusts has been guarding her butt and scorching her lips.

What readers are saying:

WOrkS of FiCTioN – “All in all Undertow is a great book that not only keeps you guessing, but doesn’t let you set it down. I loved the characters and their interactions and definitely hoping for a continuation of their story.”

Reading Diva – “This series takes paranormal somewhere I haven’t been as a reader and I can’t wait to spend more time at the Cape or wherever Eila’s journey takes her. Do I recommend this book? Yes, Yes, Yes, and YES!” (TOP PICK winner)

Book Talks by the Library Lady – “I could not put this one down!  Even when I needed to put it down, I had to almost immediately pick it back up.  It took mere hours for me to read this entire book and I am truly ticked that Eila’s next story won’t be published until July 2014.  I don’t want to wait for this story to continue! This is an addictive read.”

Undertow surprised me, but in a very good way! There was a little of everything–an intriguing world with strange, fascinating beings, a sweet romance, and an edge-of-your-seat mystery. I enjoyed reading this book, and though I didn’t connect much with the characters, I found the story very interesting and the twists and turns kept me hooked and guessing.

Eila Walker has inherited an enormous, beautiful house in Cape Cod from a mysterious benefactor. She and her guardian move to the new house, and Eila has to attend a new school. She makes friends with a jokester named M.J., and his friend Ana. And on the first day of school, she meets a mysterious, gorgeous boy named Raef. She and Raef have a connection with one another, but Eila doesn’t know what to make of it, while Raef seems to know what’s going on between them, and he seems to be more than he is.

Undertow had a slightly vampire-themed feel to it, in that there this secretive mystery surrounding Raef, but luckily, Undertow is not a vampire book, and we don’t have to wait long to find out what Raef–and Eila–truly is. Raef is what’s known as a Mortis, a soul-sucking creature, and Eila is a descendent of the Lunaterra, beings that are meant to fight the Mortis. So Raef and Eila are meant to be enemies (star-crossed lovers!) and their relationship has a forbidden feel to it, but they make it, or at least try to make it work anyways. They grow to care and love each other, and Raef is very protective of Eila in the sweetest way.

The paranormal part of the story really intrigued me. It’s the usual good vs. evil, but I really liked how K.R. Conway played it out. I couldn’t guess what would happen next, and the tension and mystery built up very nicely. Overall, Undertow is a good paranormal read, and I’ll be looking forward to the sequel.

I have been a journalist for 15 years and serve on the Board of Directors for the Cape Cod Writers Center. I also drive a 16-ton school bus because I am ENTIRELY NUTS.

In addition to working jobs that should come with a warning label , I hold a BA in Psychos (Forensic Psych), torment the tourists about Jaws, and occasionally jump from the Town Neck bridge in an attempt to reclaim my youth.

I live on Cape Cod with two smallish humans who apparently are my kids, my fishing- obsessed husband, two canines (adept at both flatulence and snoring), and a cage-defiant lovebird that sleeps in a miniature tent. Nope – that’s not a type-o. The bird is quite the indoor camper.