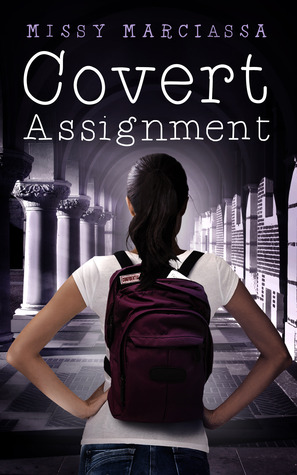 Covert Assignment is a New Adult, Coming of Age Novel with a strong romantic element. Elle is ready for graduation and full-fledged adulthood: no more living like the leftover of her parent’s divorce. She’s about to graduate with her degree in Information Science (the 21st century term for Library Science) and has a ten-year plan as well-designed as any model for analyzing metadata: earn her JD/MBA, enjoy a couple of years as a single professional, then marry her college sweetheart, Adam, and start her own family.

Yet Elle feels like she returned to an alternate universe her final semester. There are pictures of Adam with a classmate who must be surgically enhanced, but he insists he wants Elle. CIA recruiters show up on campus, and they aren’t just interested in recruiting Elle for future employment: turns out she’s already working for them since they’re funding her thesis. Hot operative Preston Raddick is tasked to work with her. Preston isn’t just hot: he’s hot for Elle, but is he offering happy ever after or happy for right now? A fling with Preston could be the beginning of a new life plan, which is exciting and scary, especially with espionage thrown in. Elle needs a predictive model to tell her which decisions have the greater likelihood for happiness…

Covert Assignment is about the unexpected turns life can take when making “adult” decisions.

Covert Assignment was a surprisingly short and fun read!

Elle is in her last year of college, and she finds out that Adam, her boyfriend of two years, has cheated on her. But she’s more angry than heartbroken. And then she goes to class and meets CIA recruiters, one of whom is a sexy CIA operative, Preston Raddick. Elle is a complete nerd (but an adorable one) and it turns out that she’s been unknowingly working for the CIA through her thesis. And now they’ve come to ask her for help and she agrees.

Throughout the book, Adam keeps coming back to Elle and groveling, begging her to take him back. She’s angry, but she’s still not quite ready to let him go. If she breaks up with Adam, then she feels like she’ll be alone. But then she starts being with Preston more, and thoughts of Adam are completely out of her head. Preston is a nice guy with great qualities–he’s a badass CIA operative, he can be sweet and supportive, and he can be sexy when he wants to. So of course Elle would develop feelings for him.

I really enjoyed the feel of the college atmosphere of the book, and Elle’s braininess. I hadn’t expected to have an in depth look at the CIA and its operations, but it was a lovely surprise. Covert Assignment was a unique and refreshing read. And towards the end, there’s a lot of action taking place. Everything builds up, everything’s intense, and the book ends with a bang. All loose ends are tied up, and I really enjoyed reading it.

Missy Marciassa loved getting lost in novels from the time she could read, so it’s no surprise she wanted to write. Her very first “novels” were re-writing the books she read to get the endings she wanted in second grade. Missy continued to read and write through grade school and high school.

After becoming rather disillusioned with fiction after writing literary criticism as an English major in college, however, Missy focused on her enjoyment of learning about people and studied psychology. Reading fiction fell to the wayside with all the reading and writing required for college and graduate school, but once Missy became a doctoral candidate, she rediscovered her love of fiction. Then she started getting the urge to write, an urge that wouldn’t go away (she refuses to diagnose it as a compulsion). Covert Assignment is the end result of that urge.