Enigmatic and sexy, Professor Gabriel Emerson is a well respected Dante specialist by day, but by night he devotes himself to an uninhibited life of pleasure. He uses his notorious good looks and sophisticated charm to gratify his every whim, but is secretly tortured by his dark past and consumed by the profound belief that he is beyond all hope of redemption.

When the sweet and innocent Julia Mitchell enrolls as his graduate student, his attraction and mysterious connection to her not only jeopardizes his career, but sends him on a journey in which his past and his present collide.

An intriguing and sinful exploration of seduction, forbidden love and redemption, “Gabriel’s Inferno” is a captivating and wildly passionate tale of one man’s escape from his own personal hell as he tries to earn the impossible…forgiveness and love.

So I’m reading this series in time for the release of the third and final book, Gabriel’s Redemption (out today!), and… I’m not really sure how to feel about Gabriel’s Inferno. On one hand, I really liked the story and the characters and the writing, but on the other, it was just so freaking l o n g. It’s about 500 pages or so, and my lord, I’m not sure it need to be.

I wasn’t sure what to expect in Gabriel’s Inferno, but what I got I ended up really liking. The writing is pretty different than what I’m used to. It’s more sophisticated, if a bit pretentious at times, but overall, I really liked the feel the author gave the book. Everything was very slow and sensual, which fit perfectly for Julia and Gabriel’s story.

Julia is a very, very shy and innocent 23-year-old who is in grad school studying to become a Dante specialist. She has to take a class taught by Professor Gabriel Emerson, who is a cold-hearted, strict man, despite his charming good looks. Even though Gabriel is intrigued by Julia’s innocence and sweetness, he’s contemptuous of her. He doesn’t want to care about some lowly, poor grad student, and so he doesn’t. He was a bit hard to like in the beginning, since he’s so arrogant and cold and just a gigantic jerk, but he slowly grew on me once his and Julia’s romance started.

Julia is the quintessential pure, good, virginal girl that I had a hard time liking at first, but somehow, her shyness worked. I got used to her innocence, to her goodness, and she was a perfect contrast to Gabriel, who has a very dark past.

“Why not think that sometimes–just sometimes–you can overcome evil with silence? And let people hear their hatefulness in their own ears, without distraction. Maybe goodness is enough to expose evil for what it really is, sometimes. Rather than trying to stop evil with more evil.”

It turns out that Julia and Gabriel have already met before, and only Gabriel has forgotten that meeting. Julia was only seventeen, but she fell in love with Gabriel, her best friend’s adopted older brother. They met and talked at an orchard, and they were so sweet with each other. Gabriel called Julia his Beatrice, who was the love of Dante’s life. It was a magical, beautiful night that changed the both of them, but Gabriel has no recollection of it, and Julia is hurt. But she toughens up her heart against Gabriel, which is very difficult for her, due to both her shyness and his overbearing attitude. But they can’t fight the attraction they have for each other, and once Gabriel remembers who Julia is, they begin their romance, even though it’s against the rules for student-teacher fraternization.

Gabriel has a tragic, heart-breaking past that is alluded to throughout the book, and it’s the sort of past that shaped Gabriel into the kind of man he is now. He used to sleep with a different woman every night, get drunk all the time, but now, Julia changes things for him. He falls in love with Julia, and he’s such a romantic man. He worships Julia and treats her like a queen, even as he believes he doesn’t deserve her.

“You deserve better. You deserve everything, and that’s what I’m going to give you.”

They have a ten year age gap, which wasn’t too bad for me, and it made sense for Gabriel to be a bit older since he’s a college professor. And oh my goodness, I could go on and on about the sweet things he says to Julia. Gabriel does a total 180 from the beginning of the book, and he kept making me go Aww and blush.

“When I told you that I was intending to worship you with my body, I meant it. With all my heart. I will never take from you. I will only give. In my bed and outside of it.”

Gabriel and Julia have a whirlwind love that is so powerful and passionate. They open up to one another, body, mind, and soul, and their romance had me hooked from start to finish (even though the book was crazy long!). Gabriel’s Inferno is raw and dark and gritty, and I’m glad I read it, because it’s such a unique, captivating read.

3.5 hearts! Although I totally give a 5 for all the mushy stuff Gabriel says. Sah-woon! 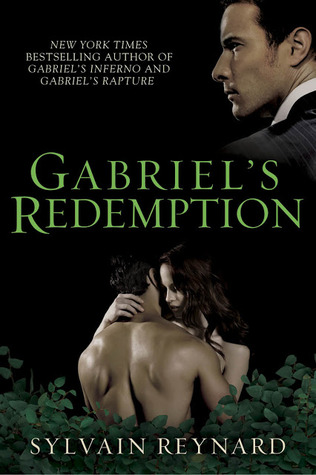