A biker. A tattoo artist. A love to last a lifetime.

Maddox Cross has always had to be tough. When his father went to jail for murder, the teenager took care of his sister and mother. Now on his own and working security at a night club, Maddox wants to become a tattoo artist-a dream that comes closer to reality when he falls for the hottest, most tatted woman he’s ever seen. She’s wild and beautiful, and Maddox will do anything to be with her.

Bee Malone came to town to open up her new tattoo parlor, Masquerade. Since being kidnapped as a young girl, Bee has had trouble getting close to anyone. But when she meets Maddox, she sees that under his hard biker’s body is the sensitive soul of an artist. What starts out as a sizzling one-night stand soon becomes so much more.

Bee wants Maddox to join her tattoo business, but letting him into her life means revealing all her most intimate secrets. And as the past begins to intertwine with her present, Bee fears their love may not be as permanent as their ink . . .

Masquerade was phenomenal! It was slow, but poignant. I loved how the characters grew on me throughout the book, and Maddox and Bee’s story went straight to my heart. The writing flows so well (I’m definitely going to read other books by Nyrae Dawn), and some quotes just popped out at me, making me think and feel so much. When I started reading, it was a bit hard to get sucked into the book, but by the end of it all, I truly, wholeheartedly enjoyed reading Masquerade. It was the culmination of everything–the slow, sweet romance, the complexity of main characters, the wonderful writing–that had me smiling by the end of the book.

Masquerade is the third book in the Games series, but can be read as a standalone. I don’t really like starting a book that’s not the first in the series, but I made an exception for Masquerade. And it didn’t disappoint! The main characters from the other books in the series do appear in Masquerade (Maddox is the brother of the heroine from Charade), but Nyrae Dawn worked the story well enough that I didn’t need to have read the previous books. So if you want to jump in the Games series and start Masquerade first, like I did, you can!

I loved, LOVED how the main characters developed throughout the book. Maddox and Bee start off as closed, private individuals, but with good reason. Maddox kept quiet about his father’s secrets, secrets that ruined his family. His guilt makes him lost, and he has no direction in life anymore. Bee was kidnapped when she was young, but her kidnappers were ‘good’ people. They loved her, even though they stole her, and when Bee was discovered, the kidnappers went to jail. She loved those parents, but she feels guilty about loving them, because they kidnapped her. And she can’t be the good daughter her real parents want, since Bee ended up being a girl with tattoos who didn’t want to go to college. Bee doesn’t know who to love anymore, she doesn’t know what love means anymore, so she becomes lost herself.

These two lost, tortured characters eventually find their way towards each other. Bee and Maddox hook up one night, believing they’ll never see each other again. But it turns out that Bee is the tattoo parlor owner that Maddox wants to apprentice at. Bee reluctantly decides to give him a chance, recognizing in him the guilt and anger that she once, and still, feels. And that one decision gives the two of them a chance at love, love that they never really believed they would ever find. But it’s definitely not an easy road getting there.

Want. We both want each other but we know it’s not smart to act on it. I hate it but love it at the same time.

Bee and Maddox agree not to sleep with each other again, but… there’s some seriously hot chemistry between the two. The two of them spend a lot of time together at the tattoo parlor, and eventually they start opening up to each other. They don’t really talk, but they learn about each other through the other’s actions. I thought this part was very beautiful, how the two of them learn about each other not through words, but by actions. The romance builds up slowly, but it’s so, so sweet.

Through each other, Maddox and Bee learn to move past their guilt and inner pain. It was truly heart-wrenching at some parts of the book, and my heart cried out for Bee and especially Maddox. Both of these characters have so much depth and growth, and I loved reading their journey towards happiness–with each other.

Christ, we have all lost so fucking much. Parents, kids, dreams–way more than our fair share. We’ve hurt people we’ve loved and we’ve hurt ourselves and we’ve been lost. Through it all, we’re still fucking standing.

And can I just talk about the writing again? I freaking fell in LOVE with Nyrae Dawn’s writing. I highlighted so many quotes that spoke to my heart. Everything is so raw and emotional, and Nyrae Dawn portrayed everything perfectly.

This quote is one of my favorites from the book:

Reality. It’s not living a lie like so many of the people we know have done. It’s not treating life like a game of charades or living behind any type of façade. Life is fucked up, it hurts, and it’s not always pretty, but damned if it can’t be beautiful too.

I highly, highly recommend reading Masquerade or anything by Nyrae Dawn, if her writing is just as good in her other books (which I will definitely be reading soon!). Masquerade is packed with emotions, which I thoroughly enjoyed, and the romance between Maddox and Bee is so real and honest and beautiful. 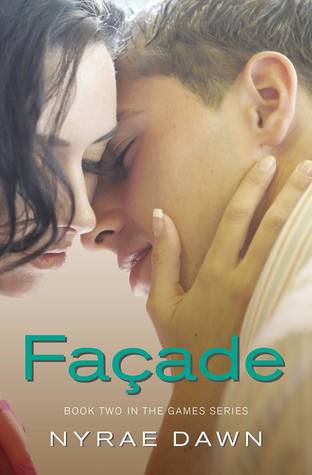