Sooo, SHARING YOU by the lovely Molly McAdams has just released! And to celebrate, this week Molly will be sharing guest posts, excerpts, and giveaways! Today, Molly talks about Love at First Sight!

Ahh … that wonderful, mysterious thing every woman has dreamt of/wished for since she was a little girl. I believe we can thank Disney for that. But does it actually exist? Sure, we know without a doubt that there is lust/attraction at first sight, but it’s impossible for it not to. You see someone, they’re attractive to you, and instantly your body and mind go into overdrive thinking about a way to introduce yourself … every so slyly, of course! But I’m talking about love. That moment where everything seems to fade away except for the person in your line of sight. That moment when your heart starts pounding in a way you’ve never felt. That moment when you see your future with this person flash before your eyes. Does it happen?

That happened with my husband, and it also happened for my mom with my dad. I was eighteen when I met my husband at the beach on a Marine Corps base, and I just knew. I told my roommate when we left that afternoon: “I’m going to marry that boy someday.” And I married him a little over a year later. My mom was in high school when she met my dad at a house party, and that night went home to tell her mom: “I met the guy I’m going to marry.” Granted, she was secretly in love with him for years before he realized he was in love with her too, and now they’ve been married for over thirty years.

It just so happened for my mom and me that there was a party or BBQ going on when these encounters happened. (My hubby’s friends were all barbecuing on the beach, but we walked away and spent hours just talking.) So it seems that I’m partial for my characters meeting in these type of settings too. (Hell, apparently Shakespeare was too! Can we say Romeo & Juliet?) There’s something about a party that makes things like this possible. You meet new people, there’s a relaxed atmosphere, and there’s almost an excitement in who you may or may not see—especially the new possibilities! And that opportunity seemed too perfect to pass up for Brody and Kamryn at Kinlee’s BBQ. Even if their situations were different from mine or my mom’s. Even if their love was forbidden. Even if it was the last thing either of them were expecting or even wanted.

Love hits you when you least expect it, and it’s never exactly how we planned it out in our minds—but that’s the beauty of it. The unexpected, the possibilities … all of it is so perfect in it’s own way, just as Brody and Kamryn’s was.

Molly’s Daily Question: Have you ever experienced this not-so-myth called: Love at first sight?

P.S. The day Kamryn and Brody meet, Kamryn has a bunch of her cupcakes with her! (Well, duh, Molly … when doesn’t she?) But if you want a FABULOUS triple chocolate recipe, here you go:

Mix everything together except the chocolate chips
Once smooth, add chocolate chips covered in flour, stir in
Pour into greased cupcake pan
Put in pre-heated oven of 350 degrees
Check with toothpick at 20 minutes, if not ready, continue checking every 3 minutes.
(if you want to make as cake, put in bundt pan and bake for 45-50 min)

Twenty-three year old, Kamryn Cunningham has left all she’s ever known and moved to a small town where no one knows her name, who her parents are, or her social status in the horseracing world. Months after opening her own bakery and evading attempts of being set up by her new best friend, she meets Brody. But Kamryn fights the instant pull between them because there’s a detail she can’t dismiss. Brody’s married.

To say that twenty-six year old, Brody Saco has had a rough marriage would be an understatement. After marrying his pregnant girlfriend, he spends the next six years in a relationship filled with hatred, manipulation, and guilt involving a tragedy that happened five years earlier. When he keeps running into his sister-in-law’s best friend, Kamryn, he can’t ignore that she makes him feel more with just one look than his wife ever has; and soon he can’t continue fight his feelings for her.

When staying apart proves to be too difficult, Brody and Kamryn enter a relationship full of stolen moments and nights that end too soon while they wait for Brody to file for divorce. But the guilt that comes with their relationship may prove to be too much for Kamryn, and Brody might not be strong enough to face the tragedy from his past in order to leave his conniving wife.

My body jerked awake, and I stilled as I listened for whatever had woken me. Brody was now behind me with his body curled around mine, and the sound of his soft snores was all that met my ears for a few moments. Closing my eyes, I relaxed into the pillow again when I heard the ringing. Moving from Brody’s arms, I glanced around for my phone, but didn’t see it and remembered I’d left it in the bathroom, and this was coming from outside my room. Grabbing for the pants that were on the floor of my hallway, I searched the pockets until I found Brody’s phone, and my body turned to ice when I saw the screen.

“Brody,” I said as I climbed back on the bed and shook his shoulder. “Brody wake up.”

His eyes shot open and moved quickly to the phone I was holding out to him. “What—”

“Olivia is calling you.”

“Fuck,” he whispered, and pinched the bridge of his nose as he turned to his back. Taking the phone from my hand, he cleared his throat a couple times and answered. “Hello?”

“Where the hell are you? Do you know what time it is?”

I didn’t need to be sitting directly next to him to hear her. I’m positive I would’ve been able to hear her shrill voice if I’d been back in the hall.

Glancing at his phone for a second, his aggravated expression never changed as he brought the phone back to his ear. “Yeah, Liv, I got caught up at work.”

“And you couldn’t call to tell me?”

“You said you’d be staying with your parents if you got back from Washington tonight, I didn’t know it would matter to you if I was late or—shit, Liv. Why … fuck, why are you crying?”

“Well, obviously I’m not at my parents’, Brody! I thought something had happened to you, you know, I’m trying to be a good wife here. And you are hours late and don’t even think to—” she cut off on a sob.

Brody’s hand fell over his face, and his head gently shook back and forth. “All right, I’m sorry. You’re right, I should have called you.”

My body locked up when I heard her desperate plea, and I watched as Brody’s hand moved, and he turned his head to look at me. Even in the dark I could see the war he was fighting as he listened to his wife cry on the phone, and watched my every move.

Olivia said something that was now too low and mumbled for me to hear, but Brody’s expression suddenly looked like he was in pain.

“I’m finishing up a report, I’ll be back soon.” Without waiting for her to respond, he ended the call, and reached out for me, but I stopped his hand.

His jaw clenched shut, and he shook his head once. From the way his eyes studied my face, as if trying to memorize it, I knew he wouldn’t. Twisting away, I got off the bed. I needed to get away from him before I lost it.

“I know. You have to leave, Brody, it’s fine.” I quickly grabbed at my clothes on the floor and dashed into the bathroom.

Once my clothes were on, I pressed my hands to the marble counter as I bit down on the inside of my cheeks to keep from crying. I’d gone into our relationship knowing we wouldn’t be able to have this—have nights together with nothing standing in the way—but after the night we’d just shared, I’d let myself hope.

Having Olivia call had been like a slap to the face. I couldn’t do this, I couldn’t be this person. But as Brody came up behind me and eased his arms around me to press our bodies together, I knew that for this man … I would. I would go through anything if it meant he was mine in the end.

“I’m so sorry,” he said softly before pressing his lips to the sensitive spot behind my ear. “Please don’t be mad, I couldn’t handle it if you were.”

I kept my eyes trained on my hands gripping the countertop and nodded, not trusting my voice anymore.

“One day … one day we won’t have to do this anymore. I’ll come home to you, and get in our bed and never leave. I swear.”

My vision went blurry and I closed my eyes tightly against the tears.

How was it possible that I was already falling so hard for this man, that the thought of him anywhere but beside me had me feeling like I was drowning and unable to pull in the air my body needed to live? I was quickly becoming addicted to him, and the way he made me feel with the smallest of touches. We were dangerous together, but I knew I couldn’t live without him.

“Forgive me,” he pleaded, and suddenly his body and warmth were gone. And as much as my mind and body screamed at me to follow him, to beg him not to leave, I was rooted in place for long minutes until I heard my door shut, and his car start up in the garage.

Taking shaky steps back until I hit a wall, I slid down until I was seated on the cool floor, and the tears I’d been holding back fell mercilessly as desperate sobs worked their way from my chest. 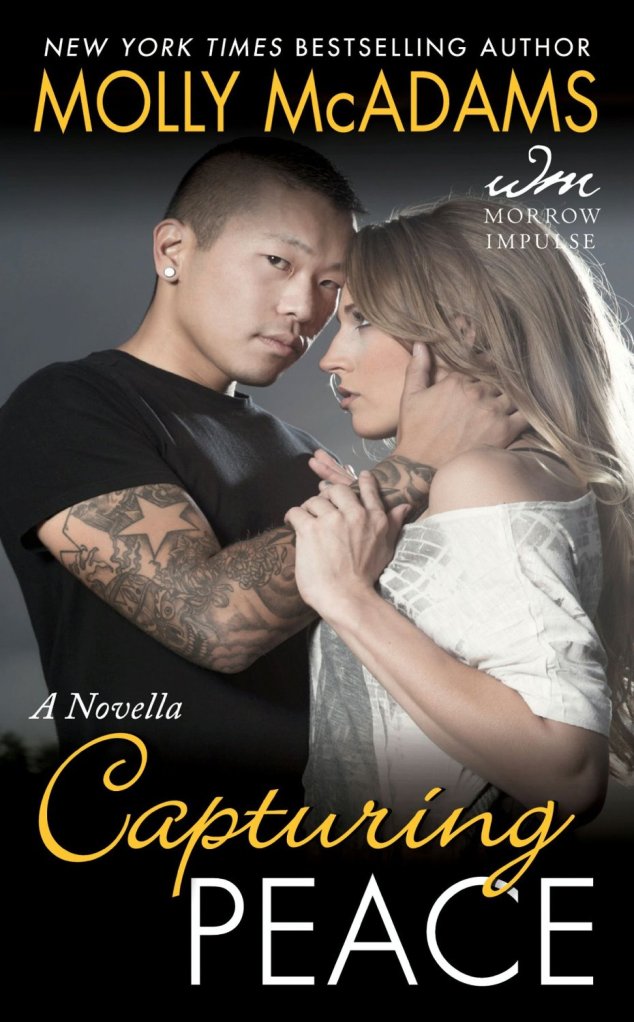 Grand Prize: a gift basket of some of Molly’s previous books, a cupcake charm necklace–since cupcakes kind of play a major role in this book AND they’re delicious–and some deluxe cupcake mix to make some confections of your own, Kam-style.

One thought on “Guest Post, Excerpt & Giveaway: Sharing You by Molly McAdams”