We are thrilled to be able to bring you the Release Day launch for BETTER WHEN HE’S BOLD by Jay Crownover! BETTER WHEN HE’S BOLD is a New Adult Contemporary Romance novel being published by HarperCollins, and it is the 2nd book in The Point Series. This amazing book releases today!! Check it out below then grab your copy.

From New York Times and USA Today bestselling author Jay Crownover, comes the second book in a combustible new series, Welcome to the Point, that is sexier, darker, and better than ever.

There’s a difference between a bad boy and a boy who is bad. . . . Welcome to the Point.

In a dark and broken kingdom, a ruler has be fearless to control the streets and the ruthless people who run them. Race Hartman is just bold enough, just smart enough, and just lost enough to wear the crown. Places like The Point will always have bad things and bad people, but the man in control of all that badness can minimize the devastation. Race has a plan, but can he prevent total annihilation without destroying himself?

Brysen Carter has always seen the real Race—a guy too pretty, too smooth, and way too dangerous. Basking in his golden glow is very tempting, but Brysen knows she’ll eventually get burned. She has enough problems without the risky danger and mayhem that comes with a guy like Race. Too bad Brysen faces a threat close to home that might be more dangerous than anything The Point has ever produced.. And the only person interested in keeping her safe is the one man she can’t allow herself to have.

Sometimes being bold is the only way to stay alive. But can she let Race save her life . . . if it means losing herself to him?

I wheeled the Mustang into the compound and watched to make sure the gates swung closed behind us. The security lights flickered on overhead, casting her in an ethereal, bluish glow. Everything about her was refined and pure looking. God, I wanted to mess her up. I wanted my hands in her hair, my marks on her skin, and my taste in her mouth. I wanted her to look as rough as she made me feel on the inside. No one had ever riled me up like that before. Maybe because I was so used to just getting without having to ask, and Brysen never offered that to me. I always had to ask her what the next move was going to be, and her answers often surprised me. She was not a sure bet, and I think the challenge of that made her even more desirable.

“The lengths we go to in order to keep our family safe, to do right by those we love, is often a weighty burden to bear.” I got out of the car and went around to let her out of the passenger side. When I pulled her up, I pressed her back into the side of the car with the full length of my body and bent down so that my mouth hovered enticingly over the plump ridge of hers.

“I would do anything for Dovie, anything. I have done things for her that made me hate the man I had to be in order to do them, but it was in her best interest. I admire you being able to put your own life down and pick up a different one out of loyalty to your sister, but somewhere in there, you need to remember she’s going to have to learn to take care of herself. She’ll eventually have to admit that your parents are fucked and move on with her own life. Dovie found the one person in the world to love who has the ability to insulate her from anything the Point wants to throw at her. Your sister will eventually have to find her stability as well. She won’t need you forever.”

I saw something flare deep in those cerulean eyes, a spark of pain, maybe of realization that I was right, but then it was gone and she was pressing up on her tiptoes and sealing her mouth over mine. I let my hands glide down her sides and fall under her backside. She had the nicest butt on any girl I had ever seen, the nicest body really. There was no end to all her curves and dips, and anywhere my hands decided to land, they were filled with firm and sexy flesh. The brief glimpse I had had of her out of her towel the last time we were this close together had been enough to burn out the image of any other female I might’ve seen naked in the last few years. All I could see was Brysen and her pretty, pale skin, her high breasts with perfectly pink nipples, and her most private of places that were just at elegant and alluring as the rest of her. She was a blond bombshell and I could feel my body urging me to stop playing around and finally seal the deal with her. 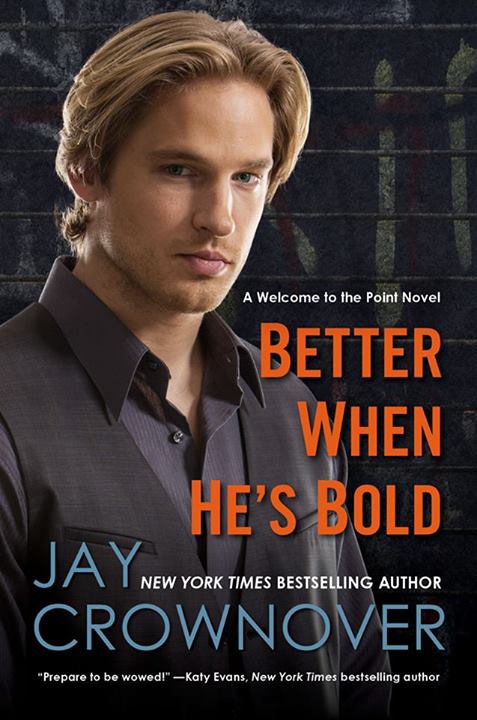 Jay Crownover is the New York Times and USA Today bestselling author of the Marked Men series. She will also be introducing the dark and sexy world of The Point in a new series this summer starting with Better When He’s Bad. Like her characters, she is a big fan of tattoos. She loves music and wishes she could be a rock star, but since she has no aptitude for singing or instrument playing, she’ll settle for writing stories with interesting characters that make the reader feel something. She lives in Colorado with her three dogs.