Welcome to today’s stop on the blog tour for It Started with a Scandal by Julie Anne Long! 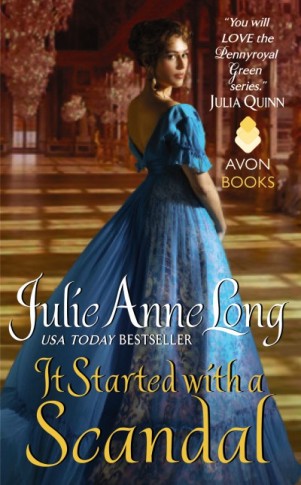 Lord Philippe Lavay once took to the high seas armed with charm as lethal as his sword and a stone-cold conviction: he’ll restore his family’s fortune and honor, no matter the cost. Victory is at last within reach—when a brutal attack snatches it from his grasp and lands him in Pennyroyal Green.

An afternoon of bliss brings a cascade of consequences for Elise Fountain. Shunned by her family and ousted from a job she loves, survival means a plummet down the social ladder to a position no woman has yet been able to keep: housekeeper to a frighteningly formidable prince.

The bold and gentle Elise sees past his battered body into Philippe’s barricaded heart . . . and her innate sensuality ignites his blood. Now a man who thought he could never love and a woman who thought she would never again trust must fight an incendiary passion that could be the ruin of them both.

Now here’s Chapter One: Part One from It Started with a Scandal! ❤

“In light of your …circumstances…Mrs. Fountain, I’m certain you’re aware that it is a bit unusual for you to be granted an interview at all. But this is an exceptional…situation…and the Redmond family did put in a good word.”

So many words requiring delicate choosing and pillowing with little silences. Circumstances. Situation.

Elise gritted her teeth clamped together, withstanding all of them the way she had for years.

“I understand,” she said somberly.

“—that is not to say that you could not satisfactorily perform the duties, and I should hope you would not be influenced by Mrs. Gordon, whose temperament proved unequal to the job—”

Mrs. Gordon must be the sobbing woman Elise had passed departing the house as Elise came up the walk. She’d been carrying a valise and muttering “heartless bastard” viciously under her breath.

“…because the successful candidate will possess a clear head and a mature outlook…” Mrs. Winthrop continued. She paused briefly in her torrent of words to narrow her eyes at Elise.

Elise had donned her most severe gown and ruthlessly pinned her hair motionless with approximately three hundred pins. She nodded, serenely confident she looked mature and that nothing as frivolous as a curl would escape.

And she kept her fingers laced tightly in her lap, as if this alone could keep her nerves from shattering. It had at least disguised the trembling.

Would that she’d managed to keep her stays laced just that tightly six years ago.

Alas, spilt milk, and all of that.

“…and as you know, I’m employed by the Earl of Ardmay, and they have volunteered me to undertake the selection process as a special favor to their family…”

Mrs. Winthrop had not ceased speaking since Elise arrived fifteen minutes ago.

“…and as for the current staff, there will be no steward or butler, as this is a relatively small household and the tenant is temporary. So you would head the small entire staff, which is comprised of—”

Something unmistakably large and glass, hurled from a considerable distance with considerable force, exploded into thousands of jingling fragments.

It was exactly what Elise expected her nerves would sound like when they finally shattered.

In the stunned silence that followed the rain hurled itself at the window like a warning. Get out! Get out while you can!

Ah, if only she’d a choice.

Mrs. Winthrop cleared her throat at last. “He likely won’t ever aim at you. All the same, there’s naught wrong with his arm and it’s best to be well clear of him if you think he might be in a throwing mood.”

Elise hoped this was black humor. How on earth to respond? She glanced down at her bloodless knuckles as if they were crystal balls. No help there.

She decided to nod sagely.

“And we must always count our blessings.”

It emerged more quickly and dryly than Elise intended.

In other words: More herself than she had intended.

This she knew because Mrs. Winthrop’s eyebrows launched like birds flushed from shrubbery.

She eyed Elise sharply for a moment.

Then Mrs. Winthrop smiled a vanishingly swift smile. It was like a cinder thrown off a distant campfire, when Elise had been lost in the dark woods for weeks.

“All right then, Mrs. Fountain, I should be pleased to introduce you to his Lordship, Lord Lavay, who is a Prince of the House of Bourbon. If he’s…amenable.”

The loquacious Mrs. Winthrop went curiously silent as she led Elise through a labyrinth of Alder House’s too-dark hallways. The candles hadn’t been trimmed; a few were fitfully, smokily, burning in their sconces. She frowned. The house was handsome enough, but tn the rooms they swiftly passed the fires burned low or not at all. She surreptitiously dragged a fingertip along top of the wainscoting; she could feel dust cake it.

She saw no evidence of the rumored household staff.

They scaled a flight of marble stairs with a smooth, modest banister, and Mrs. Winthrop finally halted paused on the threshold of what appeared to be a study.

It was as dark and soft as a cave, but a huge leaping fire picked out glints from around the room, and Elise’s eyes tracked them reflexively: the polished legs on a plumply upholstered settee and a pair of gorgeous chairs, the inlay on a small round table, the gilt on a framed map and the stand of a handsome globe, an empty crystal decanter, a tiny bottle of Sydenham’s Laudanum on a sideboard, only half full.

She stopped when she reached the mirror-like toes of a pair of Hessians by the hearth.

And followed them all the way up.

Inside them stood a man.

He in fact all but loomed; the firelight threw his shadow nearly to where she stood at the door.

Elise took an unconscious step back from it, as though it were a spill of lava.

His face was aimed rather pointedly at the window, as if he was expecting someone.

She followed his gaze curiously.

She just saw the same ceaseless slanting rain, like bars on a cell.

A spray of sparkling shards surrounded his feet. The remains of a vase, from the looks of things.

The man turned. Slowly, as if he was the earth itself on its axis. Or as if an invisible sculptor was rotating him to present a finished work.

Voila! Elise thought to herself. An attempt at bravado.

It was too late. She’d already sucked in her breath and tightened all of her muscles, like a creature who had stumbled across a predator in a clearing and wished to make herself unnoticeable.

He was so clearly of that singular species, The Aristocracy, that she might as well have bought a ticket to see him, the way she had once when her father had brought her, as a little girl, to see the Royal Menagerie in London.

He wasn’t young. There was no softness to his face—not in the set of his mouth, or the burn of his gaze, or the severe right angles of his jaw. His beauty was austere and inarguable and there was a palpable force to him, as if he had sprung from the earth due to violent underground activity, a bit like a mountain range. She thought about the things she’d been told about him.

He looked like all of the things he was purported to be.

Do we carry around our pasts so visibly? She wondered. Because if she so, she was certainly in trouble.

There was no denying that he frightened her.

And after a moment, this made her angry. She’d been so certain she was impossible to frighten after the events of the last five years. She could not afford to be frightened. She thought she deserved never to be frightened again.

She squared her shoulders.

Life is full of tests, children, she’d once primly told her students.

That was before she’d been tested.

The woman Mrs. Winthrop brought into Phillipe’s study was petite and colorless. Her face and the folded knot of her hands were twins, both white and tense. Her dress was demure, long-sleeved, high-collared, fashioned of serviceable gray wool. Her hair was dark. She could be any age.

Her eyes dropped instantly upon meeting his. It was deference or fear, or perhaps fascination. He was accustomed to all of them. None of it interested him.

She was, unsurprisingly, unremarkable in every way.

Apart, that was, from her posture, which was almost aggressively rigid. It reminded him of a drawn saber.

This made him smile faintly.

He sensed it wasn’t a pleasant smile when both women gave a little start.

“I’d like to introduce Mrs. Elise Fountain, my lord.”

“You may leave us,” he said to Mrs. Winthrop, without looking at her.

Mrs. Winthrop bolted like a rabbit released from a trap.

Mrs. Fountain’s gaze rose again, rather like a man struggling up the side of a cliff, wavered, and held.

To read the rest of Chapter One, check out these blogs:

aUSA Today bestselling author JULIE ANNE LONG originally set out to be a rock star when she grew up (and she has the guitars and fringed clothing stuffed in the back of her closet to prove it), but writing was always her first love. Since hanging up her guitar for the computer keyboard, her books frequently top reader and critic polls and have been nominated for numerous awards, including the Rita, Romantic Times Reviewer’s Choice, and The Quills, and reviewers have been known to use words like “dazzling,” “brilliant,” and “impossible to put down” when describing them. Julie lives in Northern California.

One $25 gift card to ebook retailer of winner’s choice

One thought on “Blog Tour + Excerpt & Giveaway: It Started with a Scandal by Julie Anne Long”