Welcome to today’s stop on the blog tour for Exposed by Tracy Wolff! 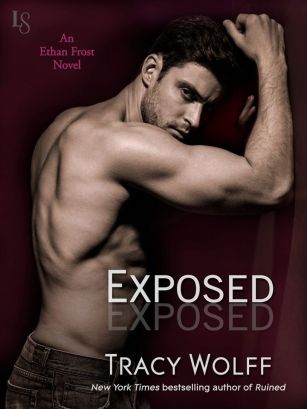 Will Ethan Frost go too far for the woman he loves?

The moment Chloe Girard walked into my life, she exposed secrets and emotions I always thought were best kept buried.

She wants to move on, to ignore the past. But I can’t do that. Not when she still suffers. And not when the man who hurt her remains unscathed. So when I discover the perfect opportunity to make him pay for what he did to Chloe, I can’t walk away, no matter the consequences.

But there’s a fine line between justice and obsession. As I turn up old crimes and new lies, I know that I’m playing with fire—and risking the very foundations of our relationship.

My love for Chloe is absolute. I just hope it’s enough to save us both.

Now here’s an excerpt from Exposed! ❤

After several long minutes, my heartbeat finally returns to normal. I pull out slowly, rolling Chloe over so that she’s cuddled into my chest and I can feel her breath against my neck, her heart beating against my own.

“I love you,” she says, her lips moving drowsily against my sweat-slicked skin.

It’s a vow on my part as much as it is a declaration. Because loving her has never been the problem. I’ve loved her almost from the beginning—I started falling the minute she refused to drink the blueberry smoothie I made her and by the time she’d returned the Vitamix I’d bought her for the second time, I was all in.

Yes, loving her is easy. But keeping her—that’s something else entirely. I’ve already fucked things up with her, twice. I lied to her, tried to break up with her, hurt her over and over again when all I’ve really wanted to do is protect her.

I don’t know how one man can fuck up as badly—and as many times—as I have. And yet, by some miracle, she’s still here. In my arms. In my bed. Though, technically, we’re in her bed at the moment.

That’s something else I intend to change as soon as possible. Not that I have anything against Chloe’s room—or her roommate. But I need her with me, in my space. I need her in my house, her stuff cluttering up my dresser, her shoes tripping me on the way to the bathroom, her sexy-sweet scent hanging in the corners of every room I enter.

Because no matter how much I’ve fucked up, no matter how many mistakes I’ve made, I can’t let her go. I won’t let her go. Not now. Not ever. We’re tied together, our lives twisted and tangled together long before we had a clue what we would mean to each other. I wouldn’t have chosen our past, how we started out. But it exists. It’s real, and it’s something we’re both going to have to live with—for better or worse.

That’s the nightmare. That one day she won’t be able to live with what Brandon did to her. With the part I played in keeping him safe because I didn’t know better. Because I was blind.

But that’s a future I hope will never happen—a future I’m determined to never let happen. Right now, in the present, she’s still here. Still in my arms. Still willing to give me—to give us—a chance to get this right.

It’s more than I deserve, but I’m taking it.

I stroke her back, murmur nonsense words in her ear as Chloe snuggles close to me. Her breathing evens out and she’s asleep again within minutes. She’s exhausted, the toll of the last few weeks—the last few months—impossible to ignore. For both of us.

I close my eyes, try to follow, but my mind is too crowded to allow any kind of sleep to creep in. Chloe’s words from earlier chase themselves around inside my head—and there’s a part of me that knows she’s right. That knows I’ll be messing with all kinds of old wounds if I keep pursuing this. Opening them up, making them bleed. Making her bleed.

Hurting her any more than she’s already been hurt is the last thing I want to do.

But as I lay here staring at the ceiling, I can’t stop thinking about my brother. About the fact that he hurt her when she was young and defenseless. About the way he continues to hurt her even now.

I flash back to the way he looked at her in my driveway that day when the whole world came crashing down around our ears for the first time. So smug, so satisfied, so convinced of his own invincibility. The nondisclosure agreement—agreements, I remind myself, thinking back to the call I just took—make him untouchable and he knows it. More, he revels in it.

I’m not okay with that.

I’m not okay with any of it. Not what he did to Chloe and those other women. Not how he got away with all of it. And most definitely, not how he’s planning to run for Congress and beyond, building a life for himself making laws that he feels absolutely no compunction to follow.

None of that is okay.

Chloe might be strong enough to live with the past—and a future where Brandon never pays for his crimes. But I’m not. And I never will be.

Tracy Wolff lives with four men, teaches writing to local college students and spends as much time as she can manage immersed in worlds of her own creation. Married to the alpha hero of her dreams for twelve years, she is the mother of three young sons who spend most of their time trying to make her as crazy as possible.

Loveswept will be hosting a Month Long Giveaway Including:
(1) Loveswept Mug
(1) Flirt Mug
Ebook of RUINED by Tracy Wolff
Ebook of CLAIMED by Stacey Kennedy
Ebook of ONCE PERFECT by Cecy Robson
Ebook of SURRENDER by Violetta Rand
Ebook of LAST OF THE RED-HOT COWBOYS by Tina Leonard
Ebook of RAVEN by Ashley Suzanne
Ebook of UNTIL YOU FIND ME by Amber Hart
Ebook of RUSH by Gina Gordon