Welcome to today’s stop on the blog tour for Blurred Lines by Lauren Layne! I have an interview with Lauren today, as well as an excerpt from Blurred Lines and a giveaway!

What are five words to describe Blurred Lines?

What was the inspiration for Blurred Lines?

Back before I knew that the romance genre was a thing, I used to read this line of what was basically, YA category romance (no idea what it was called), and I used to be obsessed with best-friends-to-lovers stories. I randomly started remembering those early teen-year reads, and realized that I HAD to write one. So I did!

Who was your favorite character to write and why?

Ben. There’s a lot of pressure to write heroes a certain way in today’s romance climate. I ignored all of that with Ben. I simply wrote him how he was in my head, and I think he comes across as extremely real because of it. Although, I really have to say that I’m proud of how I wrote Parker. I wasn’t afraid to let her make mistakes—one BIG mistake in particular that pissed some readers off—but she too, feels real to me. Okay, I’m changing my answer. Ben and Parker are BOTH my favorite characters, because they are so, so far from perfect 🙂

What’s the best part about a friends-to-lovers romance?

I’ve always found it easier to believe in the HEA when the couple’s known each other for years as friends. When they walk off into the sunset, you know it’s not a whirlwind romance that might hit the skids once they start living together. These are two people who KNOW each other, quirks and all. I don’t think there’s anything more romantic than someone who knows you at your worst self and loves you anyway.

In a novel that’s perfect for fans of Abbi Glines and Jessica Sorensen, USA Todaybestselling author Lauren Layne delivers a sexy take on the timeless question: Can a guy and a girl really be “just friends”?

Most of the time, having a girl for a best friend is awesome.

(1) My color-blind self never has to worry about going out the door looking like a sad clown.

(2) The Brita water filter is always replaced on time.

(3) Parker actually likes doing laundry for fun, and she only complains when I sneak my stuff in with hers about 30 percent of the time.

Oh, and as this morning’s adventure displayed, she’s an excellent excuse when a person needs to rid himself of clingy one-night stands.

But then there are the not-so-great parts. Like when she’s spent thirty-five minutes looking at lamps.

“Just get that one,” I say, lifting my arm to point at a random floor lamp as the noisy, child-filled scariness that is IKEA threatens to choke me.

She barely glances at the one I’ve selected. “It looks like a uterus.”

“Like that lamp. And honestly, for as much time as you spend rummaging around in women’s panties, you really should get familiar with their parts.”

“Isn’t the uterus the—” I break off, looking for the right word to describe the random memories from eighth-grade sex-ed class.

Like any normal guy would, I wince. “Christ. Why would I need to know about that? I use a condom.”

“Several of them, judging from the state of your bedroom,” she says, tilting her head to study the lime green lamp shade in her hands. “Do you think this would clash with my bedspread?”

“You’re asking the color-blind guy? Like I have any clue what color your bedspread is.”

“Seriously? Don’t act like you’ve never seen it. Two nights ago you flopped onto my bed in your sweaty gym clothes and it took me two washes to remove the man stank.”

I shake my head. “Poor Lance. Do you make him wear a plastic bag when you guys hook up so he doesn’t get his man stank on your sheets?”

I frown. “Hold up. If I have man stank, Lance has man stank.”

I open my mouth to argue, but instead I shrug. That’s another thing you learn having a girl best friend. You pick your battles.

“You have two more minutes to pick your lamp,” I say. “I’m starving.”

Parker adjusts her purse strap on her shoulder. “Oh, I’m not buying a lamp. I was just browsing.”

I inhale deeply to rein in my women suck rampage when I catch her smirk.

“Oh, I get it,” I say as we move toward the end of the store where we’ll pick up my dresser. “This is payback. You’re mad because I made up that story about you having a creepy doll collection.”

“Actually, it was more punishment for destroying the house rules. I’m totally laminating them next time.”

“Or you could just create an online version and keep them in the cloud like normal people born after 1980.”

I see a little lightbulb go on in her head and almost regret giving her the idea. Not that it matters much. I’ve never really followed her fussy rules anyway, although for the most part I try to not be too much of a dick. The towel incident this morning notwithstanding, it’s like I said, Parker loves laundry. I knew she had extra clean ones stashed away.

“Seriously, don’t get that color finish,” she says, shaking her head at the dresser box I’m about to pull off the shelf.

“Wood is wood,” I say with a shrug, starting to maneuver the huge box onto our flat cart.

I raise my eyebrows. “Old-man wood, huh? You and your kinky fetishes. Do you make the dolls watch?”

She ignores me, and uses her hip to push the box I’d started to move back onto its shelf. “That one.” She points.

“Espresso?” I ask, reading the label.

But Parker is now typing away on her phone. I shrug, pushing her out of the way so I can get at the box she indicated.

“How about tacos?” she asks, glancing up briefly from her phone.

“I just had Mexican last night,” I say through a grunt as I move the box into position.

“You said I could pick.” She gives me a challenging look, her goldish brown eyes practically daring me to argue with her.

“If it was a unilateral decision, why’d you even ask?”

“Unilateral. Good word. And it was a test. You passed,” she says, trotting to catch up with me as she replaces her phone in her purse. “So how did you and Airhead meet? The Beta Phi party last night? She looked like she was eighteen.”

“It was written on her pants. Literally.”

She makes a disgusted face as she pulls her long dark hair into a messy bun. I don’t notice most things about Parker as a girl, because, ya know, it’s just Parker, but she does have some damn good hair. It’s all Victoria’s Secret model–-like, long and dark with lightish streaks running through it.

The rest of her is kind of Victoria’s Secret-ish, too, but other than an initial moment of whoa when we first met, there’s never really been anything between us. I guess you could say I like her too much.

That and she’s dating Lance, and I like the guy. I mean, we’re not best friends or anything, but it’s impossible to live with Parker and not have some sort of friendship with her significant other.

Lance and I stop short of braiding each other’s hair, but we watch games together on occasion. I’d never make a move on his girl—even if I wanted Parker.

“So let me get this straight,” she says, as I swipe my credit card through the self-checkout machine. “One of your booty calls leaves her pants, which is weird, by the way, and then a week later, an underclassman sorority girl willingly puts them on?”

I shrug and give her a look out of the corner of my eye. “What’s wrong with that?”

Parker closes her eyes and sort of scratches at her eyebrow. “You don’t tell your mother any of this, do you?”

“Sure, we actually have a family blog, and I list my sexual activity for the week every Sunday. Is that weird?”

She ignores me, pulling out her phone again. 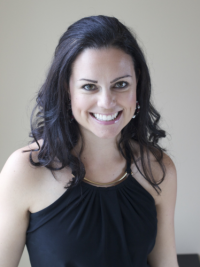 Prior to becoming an author, Lauren worked in e-commerce and web-marketing. In 2011, she and her husband moved from Seattle to New York City, where Lauren decided to pursue a full-time writing career. It took six months to get her first book deal (despite ardent assurances to her husband that it would only take three). Since then, Lauren’s gone on to publish ten books, including the bestselling Stiletto series, with several more on the way in 2015.

Lauren currently lives in Chicago with her husband and spoiled Pomeranian. When not writing, you’ll find her at happy hour, running at a doggedly slow pace, or trying to straighten her naturally curly hair.

One Loveswept Mug
One Flirt Mug
Ebook copies of: