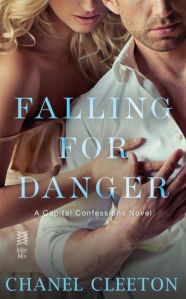 The author of Flirting with Scandal presents her third book in a sexy contemporary romance series about three sisters in a powerful political family, the scandals that threaten to destroy them, and the passion that drives them…

Kate Reynolds has just graduated from college and is determined to make it on her own. Her job as a junior political analyst at the CIA is a dream come true and the perfect opportunity to find answers about the night that’s plagued her for four years—the night she lost her fiancé, Matt, on a Special Forces mission in Afghanistan. Kate’s consumed with uncovering the truth and avenging the man she loved and lost, even if it means risking her own life to prove that his death wasn’t an accident.

When she gets too close to discovering what happened that fateful night and danger arrives on her doorstep, Kate’s stunned by the man who comes to her rescue. Together, they begin to dig for the truth, fighting to stay alive as they’re dragged down into a world of secrets and lies. But when the threat hits close to home, Kate must choose between vengeance and a future with the man who’s ignited a fire inside her that she thought died long ago.

I was really looking forward to reading Falling for Danger after reading the snippet at the end of Playing with Trouble. The heroine’s supposedly dead fiancé turns out to be alive! And he’s back in her life! How could I NOT read it after finding that out? But the romance didn’t quite pan out the way I expected it to. While I enjoyed Falling for Danger, it wasn’t quite the epic conclusion to the series I was hoping for.

He’d promised me that he’d love me forever. Where did forever go?

Kate Reynolds is on a mission to take her father down. She’s determined to expose her father for the fraud that he is, and to uncover the link between him and the reason why her fiancé, Matt, was suspiciously killed while in Afghanistan. In the four years since Matt’s death, her life has become about avenging her lost love, and there’s nothing that will stand in her way. But one night, someone breaks into her home, and she comes face-to-face with last person on earth she expected: her dead fiancé.

I really liked how determined Kate was. I could feel for her and the pain she went through with losing Matt. She’s a girl hell-bent on revenge, and I couldn’t help but admire that. She’s also never stopped loving Matt, so when he appears, she’s struck by all the feelings that come rushing back in. But four years took their toll on Matt, and he’s not the same boy she knew and loved.

She was the one constant in this never-ending purgatory where I was stuck somewhere between life and death, a walking ghost.

Matt has changed a lot over the years, no longer the carefree boy in love with his best friend. His time in Afghanistan was rough and heartbreaking, but he survived, only to hide away from the people he loved the most. Matt is pretty gruff, dark, and intense… but I struggled to like him. He’s the main reason why I didn’t love this book like I wanted to. I guess I just never really understood why he had to stay away from Kate, if he loved her so much. We never really get an explanation – or rather, Matt never gives Kate an explanation for why he faked his death and what he did over the last four years. Kate was hurt and devastated over his ‘death’, and it would’ve been nice if Matt tried to make up for the hurt. And while it was obvious that Kate still loved Matt, I didn’t feel the love Matt still had for Kate. I needed more from Matt, I really did.

The suspense in Falling for Danger was pretty mellow. It was slow in the middle and then rushed at the end, so I didn’t really become invested in the mystery/suspense. The ending wasn’t as dramatic as I’d hoped, but it was still a good end for all the characters.

I wish I could’ve loved this book more. I had such high hopes based on the premise, but since I didn’t like the hero, I couldn’t fully enjoy the story. If you’re a fan of the series, I’d recommend you read this if you want to know how the series plot-line involving the Kate’s father turns out. Hopefully you’ll love more than I did! Not to say Falling for Danger is a bad book – it just wasn’t as good as I hoped.