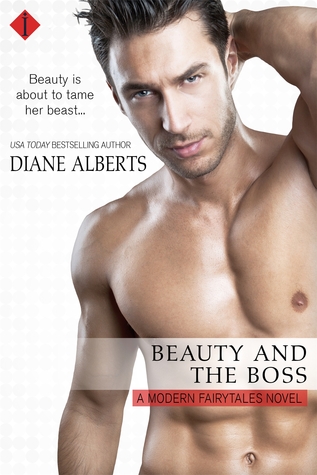 Beauty and the Boss by Diane Alberts
Series: Standalone
Publication Date: November 16th 2015
Links: Ebook • Goodreads
Source: I received an ARC from the publisher in exchange for an honest review

Beauty is about to tame her beast…

Researcher Maggie Donovan has no luck with men, and it doesn’t help that she can’t keep her eyes off of her sexy boss – the one everyone else in the office calls The Beast. Relationships in the office are forbidden. So no one is more surprised than Maggie when she pretends to be his fiancée to save him during a difficult situation. Not only has she put her job on the line, but the future of the company.

Billionaire Benjamin Gale III doesn’t believe in love or romance, but the look on his mother’s face when Maggie tells her that she’s his fiancée is worth millions. Instead of firing her for her insubordination, he goes along with the ruse. In his arms–and in his bed–she’d be everything he could ever want…which is why he can’t have her.

But if he doesn’t let her go, they’ll lose everything…

I was first intrigued by Beauty and the Boss because of the fact that it’s a modern retelling of Beauty and the Beast, my favorite fairy tale! Benjamin Gale III – the Beast – is a cold-hearted billionaire who doesn’t believe in love. Maggie Donovan – the Beauty – is one of Benjamin’s employees… but she thinks about her gorgeous boss a lot. The two of them couldn’t be more different, but when you bring them together, you get something sweet and sexy. I enjoyed Beauty and the Boss – I didn’t love it, but it was entertaining nonetheless. If you love your office romances, you should definitely give this a try.

When Maggie accidentally announces herself as Benjamin’s fiancée to save him from his manipulative mother, she has no idea what she’s gotten herself into. She and her boss may have some wicked chemistry together, but pretending to be in a relationship? And engaged? She doesn’t know how she can pull it off, but she won’t let Benjamin get thrown to the wolves. As long as she can keep her heart from getting involved, then she’ll have no problem pulling of the charade… right?

Never had he had something as sweet, or addictive, as Maggie Donovan. Pretending to love her would be a pleasure if it meant he got to kiss her. Hold her. Touch her.
Make her scream out his name.

Benjamin is a workaholic, with no time for relationships, and least of all, love. His company is his life, but when he and Maggie begin their charade, he starts to see that maybe there’s more to life than just work. Maggie is a sweetheart of a character, able to bring out the laughs and smiles out of Benjamin, which has rarely happened in the past few years. I really enjoyed the way their relationship progressed as they slowly fell for each other. It was sweet how they grew to trust each other and become friends, and the banter between them was fun to read.

Beauty and the Boss is fun and sweet, and a good way to pass the time. There isn’t anything particularly amazing that made me love this book, but it’s still a satisfying read with plenty of sexy times.

2 thoughts on “Release Day Review: Beauty and the Boss by Diane Alberts”

I can’t pass up the chance to enter @thebookishbox’s rep search for Oct-Dec! I’ve had so much fun being a rep these past 3 months and would love to continue being one (for the Adult box)! ☺️ I’m a romance reader, bookstagrammer, and booktuber based in CA and I’ve been loving the adult romance books The Bookish Box has been choosing! (I’m currently dying for August’s BOMBSHELL by Sarah MacLean 🙌🏼 - I love her books!) It would be amazing to be a rep again, it was an amazing opportunity! Good luck to everyone entering 💖 #bookishboxrepsearch4
Guess what? I’m cohosting another round of #PNRReadathon with @peacelovebooksxo & @remarkablylisa!! 👻 This will be a weekend edition happening October 8-10th, just in time for the spooky season. We have our announcement videos in our YouTube channels plus some fun templates to can use on our IG stories! Hope you can join us next next weekend! 🎃
Do you love age gap romances? It’s one of my favorite romance tropes! I love an older hero but I’ve read some amazing older heroine romances too. @authornikkisloane has both and they’re all EXCELLENT, but my favorite by far of her age gap romances (and one of my favorites of the year) is THE REDEMPTION 🤩 This book is 🔥🔥🔥. Macalister is an antihero and he falls for his new assistant who is QUITE the younger woman. There’s a 20+ year age gap lol. But they’re so perfect for each other!
What’s your current romance mood? I’ve been craving mafia romance so I finally started VOW OF DECEPTION by Rina Kent. It’s a dark marriage of convenience mafia romance. The heroine has to act like the Russian mafia hero’s dead wife 👀 It’s… intriguing so far. And book 1 of a trilogy so I have a long way to go.
Happy Friday! Are you doing anything this weekend? As usual I have zero plans and am going to be reading as much as I can. Although the first episode in the new season of The Great British Bake Off is on Netflix so I’m definitely watching that! 🍰
It’s a late post but omg I just bought my ticket to Apollycon for next summer and I’M SO EXCITED!!! Who else is going!?