As a special treat, L.H. Cosway will be writing a bonus scene! There will be a poll on her FB page to vote for a male POV scene!

Which scene from Hearts of Blue would you most like to read from Lee’s perspective?

Vote in the tour poll for the male POV scene HERE.

She upholds the law. He breaks it.

Two blue hearts, both alike in bravery
In not-so-fair London, where we lay our scene
From gun crime to petty theft
Where family is blood and survival makes hands unclean
In this place, we find two hearts who should be foes
And yet, amidst the turmoil their love still grows
Misadventure abounds and the divide will bring them strife
But with luck, death doesn’t always mean an end to life.

Hearts of Blue is a standalone contemporary romance that tells the story of star-crossed lovers Karla Sheehan and Lee Cross, a police constable and the thief who steals her heart.

I’ve adored every one of the Hearts books by L.H. Cosway, but I think Hearts of Blue might be my favorite one so far. I LOVED Karla and Lee together – they are the sweetest couple EVER! I’d been looking forward to their story ever since I read about them in King of Hearts, because a romance between a police constable and a thief? YES. PLEASE. I freaking love the opposites-attract trope, and L.H. Cosway has written one that is an absolute joy to read. If you’re a fan of the series, you absolutely must read Hearts of Blue – it’s an exciting, sexy, and heartwarmingly sweet romance that I loved.

“Give me a chance, and I’ll prove to you that everything you think you see is blurred by perception.”

Karla Sheehan sees things in black and white, which makes the job of a police constable perfect for her. She gets to uphold the law, protect the innocent, and send the not-so-innocent to jail. But what happens when her black-and-white heart starts to fall for someone who lies on the gray side of the law?

“You make me feel so fucking alive,” Lee said fervently, his words muffled by my skin. “Made for me.”

Lee might be only a few years younger than Karla, but he’s lived through so much. He’s had to take care of his family since he was just a boy, and he’s never stopped. When he loves, he does it with everything he’s got, and he’ll do anything to protect what he loves. And from the moment Lee meets Karla, he sets his eyes on her, determined to make her see that what they have, the connection that they’ve formed from the start, is something worth exploring.

I loved Lee and Karla. SO much. They are witty, sassy, so much fun read about – they’re the kind of characters that you wish were real. And I couldn’t believe how ridiculously sweet this book was – I love that Lee falls so hard for Karla, trying to protect her from the bad parts of his life all the while making her love him back. The thing that surprised me the most about Hearts of Blue was definitely Lee’s character. I was expecting him to be some obvious bad boy, but he’s actually so much more than that. He’s not just a bad boy to Karla’s good girl – he’s got depth, and his heart is loyal like no other. He is now my favorite hero of L.H. Cosway’s so far.

The world isn’t blue, isn’t lonely any more, and though I was supposed to be the thief, she was the one who stole my heart.

Hearts of Blue is a satisfying, fun, and unique romance I couldn’t put down. Every time I pick up an L.H. Cosway novel, I know I’m going to be entertained. Her stories are unlike any other and are simply unforgettable. If you haven’t tried her books yet, you are missing out! 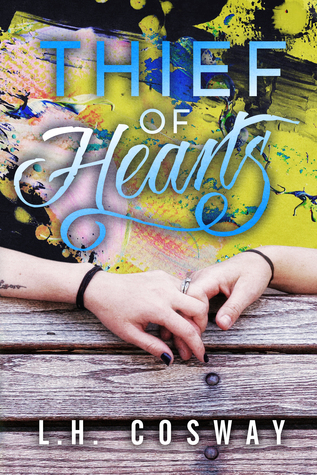