We cannot tell you how excited we are to bring you the Release Week Blitz for LOVE IN THE LIGHT by Laura Kaye! LOVE IN THE LIGHT is a novel told in dual POV and Part Two of her bestselling Hearts in Darkness Duet. This much anticipated follow-up is finally here! Make sure you grab your copy of this sexy novel today, and if you’re new to the series you can grab the first novella HEARTS IN DARKNESS for just $.99 for a limited time!

Two hearts in the darkness…

Makenna James and Caden Grayson have been inseparable since the day they were trapped in a pitch-black elevator and found acceptance and love in the arms of a stranger. Makenna hopes that night put them on the path to forever—which can’t happen until she introduces her tattooed, pierced, and scarred boyfriend to her father and three over-protective brothers.

Must fight for love in the light…

Haunted by a childhood tragedy and the loss of his family, Caden never thought he’d find the love he shares with Makenna. But the deeper he falls, the more he fears the devastation sure to come if he ever lost her, too. When meeting her family doesn’t go smoothly, Caden questions whether Makenna deserves someone better, stronger, and just more…normal. Maybe they’re too different—and he’s far too damaged—after all…

Now here’s an excerpt from Love in the Light! ❤

“So Caden said you two met in an elevator,” the tattoo artist said to Makenna, amusement plain in his voice.

“We really did. We were trapped in it for over four hours,” Makenna said, smiling. It was a little weird to talk to someone she couldn’t look at, but she couldn’t move while he was working. “In my office building. I rode it just today.”

“That’s quite a way to meet someone,” Heath said with a chuckle. “How come nothing like that ever happens to me?”

The tattoo machine pulled away from her skin. Heath laughed. “I guess I don’t,” he finally said, leaning back in.

The needles hit a sensitive spot along her spine that had Makenna grimacing. Originally, she’d been thinking of putting the piece on her shoulder, but when she’d decided on the bigger size, she thought it would look better in the center. Heath had warned her that the central placement meant inking over bone, which could hurt more, and it sure did.

Caden braced his elbows on his knees so he could lean closer. “Want to play twenty questions?” he asked.

She smiled, knowing he was trying to distract her and appreciating the heck out of the gesture. “Are there still questions left we haven’t asked each other?”

“Probably,” he said. “For example, I don’t think I’ve ever asked you your favorite sex position.”

“No laughing,” Heath said, as Makenna tried to hold back her humor. Heat filled her cheeks. “Also, TMI. However, I like TMI, so feel free to answer, Makenna.”

Since the needle was away from her skin, she did laugh that time. “Okay, so maybe there are questions we haven’t asked.” She winked at Caden as Heath got back to work. “And, to answer the question, the second part of the night on my floor.”

Caden’s gaze went molten. He flicked at the spider bite piercings with his tongue. And that had parts of her going molten, because she knew how freaking talented that tongue was.

“Yours?” she asked, arching an eyebrow. 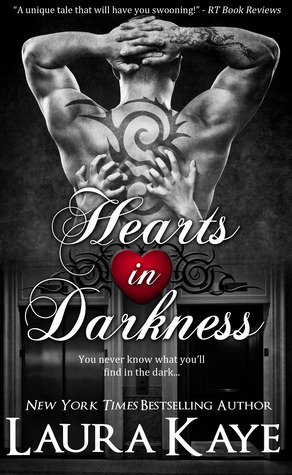 Laura is the New York Times and USA Today bestselling author of over twenty books in contemporary and paranormal romance and romantic suspense. Growing up, Laura’s large extended family believed in the supernatural, and family lore involving angels, ghosts, and evil-eye curses cemented in Laura a life-long fascination with storytelling and all things paranormal. She lives in Maryland with her husband, two daughters, and cute-but-bad dog, and appreciates her view of the Chesapeake Bay every day.

Hearts in Darkness Duet Tote bag with swag for 3 winners