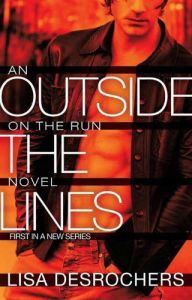 Outside the Lines by Lisa Desrochers
Series: On the Run #1 (full reading order below)
Publication Date: January 19th 2016
Links: Ebook • Goodreads
Source: I received an ARC from the publisher in exchange for an honest review

As the oldest son of a Chicago crime lord, Robert Delgado always knew how dangerous life could be. With his mother dead and his father in prison, he’s taking charge of his family’s safety—putting himself and his siblings in witness protection to hide out in a backwater Florida town.

Fourth grade teacher Adri Wilson is worried about the new boy in her class. Sherm is quiet and evasive, especially when he’s around his even cagier older brother. Adri can’t help her attraction to Rob, or the urge to help them both in whatever way she can.

But the Delgados have enemies on two sides of the mob—their father’s former crew and the rival family he helped take down. It’s only a matter of time before someone finds them. And if Rob isn’t careful, Adri could end up in the crossfire…

I was a huge fan of Lisa Desrochers’ A Little Too Far series, so when I heard she was writing a new series, I couldn’t wait to read it! Outside the Lines is the first book in the On the Run series, and even though I didn’t fully love it, it’s an entertaining read with lots of potential for the series to get better. After the slow beginning, I found myself liking the book much better once the story picked up and I became invested in Rob and Adri’s romance. If you like your romances sweet but slow, with a little mafia thrown in, then Outside the Lines is for you.

Rob Delgado and his four younger siblings are on the run. With their father, a Chicago crime lord, locked up in prison, and enemies out to get them, Rob had to get his family away from Chicago. Under the Witness Protection program, they’ve moved to Port St. Mary, Florida and are now known as the Davidsons. It’s a small town for them to lie low in, at least until Rob can get back to Chicago and destroy his enemies. What he doesn’t expect is to fall for his youngest brother’s fourth grade teacher, Adri, who is sweet, pure, innocent… and has no idea who he really is.

“You are so fucking beautiful in every way, and all I can do is ruin you,” he finally says, his voice a raw wound. “I will ruin you, Adri, and then I’ll leave. You deserve so much better than that.”

Adri Wilson is concerned about her new student and grows to care for him… and his older brother. She finds herself captivated by the enigma that is Rob Davidson. But when things don’t add up about their family, Adri is determined to find out what the Davidsons are hiding. Along the way, she finds herself falling for Rob, even when he pushes her away. There’s a bit of back and forth between them, but the chemistry between them is hot, so even though it took a while for their relationship to move forward, I was invested in their romance.

“I don’t deserve your love, but I’m going to do everything in my power to earn it every single day for the rest of my life.”

I liked this book. It’s well-written, the characters were interesting and likable… but the beginning dragged. It took a while to become fully immersed in the story, so that took a little away from my enjoyment. But by the halfway mark I was more than invested in the story and the heart-warming romance. This book is a promising start to the On the Run series, and I’m definitely looking forward to the rest of the Delgado siblings’ stories.

Reading Order: On the Run series

10 thoughts on “Early Review: Outside the Lines by Lisa Desrochers”