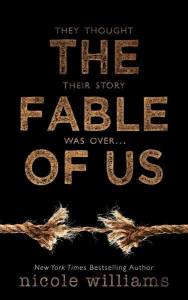 The Fable of Us by Nicole Williams
Series: Standalone
Publication Date: February 2nd 2016
Links: Ebook • Paperback • Audible • Goodreads
Source: I received an ARC from the author in exchange for an honest review

Her heart can’t be destroyed by the same person twice. At least that’s what Clara Abbot finds herself hoping when she runs into Boone Cavanaugh less than an hour after returning to Charleston.

As kids, Clara and Boone had been each other’s firsts, and no one or nothing could stand in the way of their forever. But all kids have to grow up sometime. The troubled son of the town drunk winding up with the firstborn daughter of the local royalty was a happy ending even the most imaginative of fairy tales couldn’t make believable.

Their fable came to an end as most do: tragically. Boone might have done the leaving, but it was Clara who got away and made a new life for herself in California. But after seven years of dodging her hometown, she’s only back in Charleston for seven days to celebrate her sister’s wedding. She won’t let her overbearing family or her run-in with Boone rattle her—though rattling her is obviously Boone’s primary objective.

Boone is her past and her past is behind her, a mere speck in the rearview. So why does she feel it coming back every time she looks at him? Why does she see it every time he looks back?

Just when Clara’s life can’t possibly get more complicated, the ground shifts, and she discovers just how far her family was willing to go to keep the wrong boy out of her life. Was it really Boone who left her? Or was it Clara who left him?

The truth will be hard to face. Especially when she discovers most of her life has been built on lies.

Second chance romances are one of my top favorite tropes to read, and the fact that Nicole Williams wrote one in The Fable of Us? I was in total book heaven while reading it! I’ve loved this author since I first read Crash, and with every book she writes, she proves to me why she will always be a favorite author of mine. This newest book of hers only reaffirms my love for her wonderful storytelling. I fell hard for Clara and Boone’s second chance romance – Nicole Williams has written two incredible characters with so much heart and depth, I was rooting for them from the very first page!

Clara Abbot is back in the town she hates to be a part of her sister’s wedding… to Clara’s ex-boyfriend. But a pit stop along the way has Clara bumping into the one and only love of her life, Boone Cavanaugh, who left and hurt her all these years ago. There’s a great deal of resentment between Clara and Boone, but she’s desperate enough to pay him to be her plus-one at the wedding to keep the vultures, AKA her family, away. It’s just one week with the boy she used to love who hates her now, so what could possibly go wrong?

“It doesn’t seem to matter how far away I go or how many years go by. I’m starting to accept that there will always be some part of me that is going to hold on to some part of you.”

In addition to a second chance romance, The Fable of Us is definitely a love/hate story. We don’t know the exact ins and outs of what happened during their fallout, but Clara and Boone definitely don’t like each other when they reunite. Still, underneath the glares and the angry quips lies a spark, a connection that never truly went away. You can tell that, despite everything that happened between them, all the good and the bad, Clara and Boone are absolutely meant to be. The build-up of their romance, the reconnection, and unraveled truths all lead up to one powerful love story that completely captured my heart.

“You’ve always been the most beautiful thing I’ve ever seen, Clara.” The backs of his fingers ran down the length of my cheek. “That still hasn’t changed.”

Clara and most especially Boone were the highlight of this novel. These two independent, strong, stubborn individuals were perfect together back then, and they’re certainly perfect together now. Their romance is sweet, slow, and tender – it’s the kind of love story that makes you clutch at your heart… I loved it!

I may have loved Clara and Boone, but oh man, did I hate Clara’s family. Clara’s sister, the one who’s marrying Clara’s ex, is a total nightmare. She’s jealous and petty, and the rest of the family is almost as bad. They’re a superficial, and at times cruel, group of people who prize wealth and status above anything else. So it’s no wonder Clara dreaded coming back to this place of elitism and snobbery.

Though I wished at times all the wedding drama would turn down a notch, it didn’t detract much from my enjoyment of Clara and Boone’s romance. All their moments together made up for my frustration with the Abbot family. If you’re a fan of second chance romances, you definitely need to pick up The Fable of Us! It’s a gorgeous, romantic read with wonderful writing that I recommend!

12 thoughts on “ARC Review: The Fable of Us by Nicole Williams”