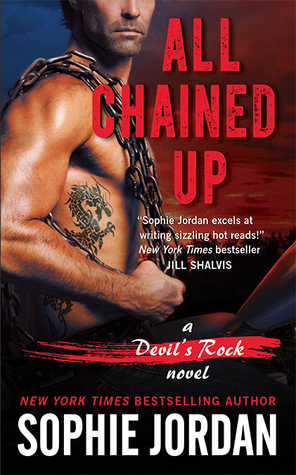 All Chained Up by Sophie Jordan
Series: Devil’s Rock #1 (full reading order below)
Publication Date: March 29th 2016
Links: Ebook • Paperback • Audible • Goodreads
Source: I received an ARC from the publisher in exchange for an honest review

There are bad boys and then there are the men of Devil’s Rock . . .

Some men come with a built-in warning label. Knox Callaghan is one of them. Danger radiates from every lean, muscled inch of him, and his deep blue eyes seem to see right through to Briar Davis’s most secret fantasies. But there’s one major problem: Briar is a nurse volunteering at the local prison, and Knox is an inmate who should be off-limits in every way.

Knox feels it too—a shocking animal magnetism that drives him to risk his own life to protect Briar’s. Paroled at last, he tries to resist her. She’s too innocent, too sweet, and she has no idea what Knox is capable of. But a single touch can lead to a kiss—and a taste . . . until the only crime is denying what feels so right . . .

“When the prison doors are open, the real dragon will fly out.”—Ho Chi Minh

It’s been a while since I’ve read a good bad boy hero, but Sophie Jordan certainly delivers with Knox Callaghan in All Chained Up. She packs a punch with all the intensity and sexiness in this first book in the Devil’s Rock series. I don’t usually read prison romances, but this one was unputdownable and highly entertaining. I really enjoyed the main characters, and the romance was off-the-charts sexy – I’d definitely recommend All Chained Up for those who want something different than your typical contemporary romance.

She and he were worlds apart, and that’s how it would always be.

Knox Callaghan and his brother have been in prison for eight years now, after being convicted of manslaughter for killing their cousin’s rapist. Knox has become a hardened, ice-cold man in order to survive prison, and his main goal is to ensure he and his brother don’t get into trouble so they can get parole. But a new, gorgeous nurse threatens everything when he can’t stop thinking about her and he finds himself wanting to protect her more than he wants to protect himself.

When Briar Davis volunteers at Devil’s Rock Penitentiary, she has no idea what she’s in for, and she certainly doesn’t expect to notice a sexy, dangerous inmate. She’s cautious and honestly a little of Knox, but the chemistry starts to build as they see each other again and again. After a heroic act leads Knox to be granted parole, Briar sees him in a whole new light. And when these two meet each other again, this time out of prison, the sexual tension between them ignites – you will seriously need a fan when you read this book!

He wanted to be the only man to touch her. It was total caveman of him, but that’s what he was. A fucking caveman that reveled in rocking her staid little world and making her fly apart. She made him want to pound his chest. Christ. Thinking about her that way was making him rock hard.

Sophie Jordan delivers a heart-pounding, sizzling read, full of tension and sexy-times. I honestly couldn’t put this book down! All Chained Up is a fantastic debut to a new series, and what’s great about it besides the fantastic romance is the set-up for the next book. I’m eagerly waiting to get my hands on Hell Breaks Loose – and I’m hoping there will be even more books in the series!

10 thoughts on “Release Day Review: All Chained Up by Sophie Jordan”