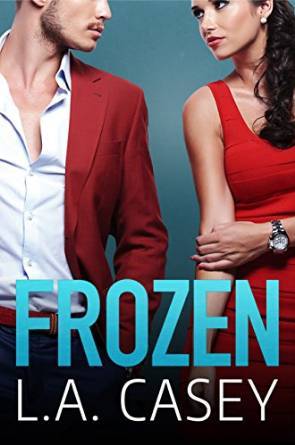 There’s one must-have toy this Christmas, and Neala Clarke has told her niece Charli she’ll get it for her. Never mind that she’s got less than a week and it looks like everywhere is sold out. She’s promised Charli a Fire Princess doll—and Neala is a woman of her word.

Darcy Hart is a people-pleaser. So when his adorable six-year-old nephew, Dustin, asks for a particular doll at the last minute, he says yes. Luckily for Darcy, there’s one left in stock at the local toy store. Unluckily for Darcy, he’s not the only person who wants it—and his rival is the one woman who’s immune to his charms.

Neala and Darcy have loved to hate each other since they were kids, and they’re both willing to do whatever it takes to get that doll. This can’t possibly end well for both of them…can it?

Frozen is a Christmas-themed standalone from L.A. Casey, and it’s a quick, humorous read for those who want to enjoy something light-hearted and fun. I didn’t particularly love it, but I can’t say it wasn’t entertaining. The antics Neala and Darcy get up to are hilarious – you definitely won’t be able to get through this book without cracking up a bit!

Neala and Darcy used to be childhood friends… until they weren’t. Now, fifteen years after they declared themselves enemies, these two are just as toxic and have never ceased their arguments. They have some wicked banter and lots of bickering, so much that sometimes their families, who are friends, become involved. This Christmas, Neala and Darcy are fighting over a toy that they want to give to their niece and nephew (respectively) – except there’s only one toy left in the store.

What ensues is a hilarious, over-the-top fight, basically a tug-of-war for the toy. It’s ridiculous and funny and seriously entertaining to read. Then, when Neala and Darcy are snowed in, they have to confront the feelings that that been brewing since they first met and are now finally being let out.

I didn’t care for Darcy much – he’s a clichéd player who messes up with Neala – but I adored Neala. I loved how she never gives in to Darcy and can hold her own against him. She’s strong and independent, and just a fantastic heroine. But put her and Darcy in the same room together, and it gets explosive between them, both verbally and physically.

Frozen is funny and over-the-top – it’s a great read to pass the time. This would be the perfect holiday read, so if you have the patience to wait a few more months to read this book, go for it!