Check out an excerpt below from Jaded Hearts by Harper Sloan! 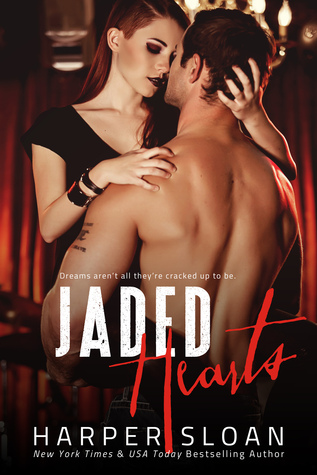 Our every desire was at our fingertips and the power of that feeling was all consuming. But then it took every dream we thought would come true and it slapped us in the face with the cold hard reality.

Dreams were just that…something that floated on the cusp of untouchable, taunting you with every graze of your fingertips before slipping even further away.

Happiness…that feeling is a joke.

In the end it became painfully obvious that each of us would always have each other, but we would forever be alone.

Signing with the record company of our dreams should have been the best thing that ever happened to us.

And it was…for a short while anyway.

While the glitz and glamour of the fame’s promise was shining as bright as our stage lights we could forget where we came from and live in the glory.  The money bought us every happiness we ever craved.  Those false securities that you think will make your life better.  The instant friends, lovers—you name it—would do whatever we asked just to spend a second in our presence.

We had it all.

The only problem was when we had those quiet moments in between the insanity.  When we were slapped in the face with the reality that all we really had—all we could count on—was each other.

My brother, Weston, is the only constant I’ve ever had in my life.  He’s the person that I know will never let me down and will always be my biggest support.  We grew up with parents that hated us.  Really…it sounds ridiculous, the notion that parents could hate their children, but ours did … no, do.  They made no secret of it when we were younger.  And they continue to attempt to pick at our very souls like the vultures that they are.

My earliest memory of them is somewhere around third or fourth grade.  That was the year that they seemed hell-bent on reminding us that we had ruined it all for them.  Constant screams and verbal lashings.

According to them, they were on the edge of fame and then we came along and it all went down hill.  Even now, I still can’t understand how they came up with that logic.  How we were to blame for their reckless behavior.  The same reckless behavior that, in reality had ruined whatever path they might have traveled.  It has nothing to do with us, but to them, we were essentially their bad luck.

When we hit middle school it got worse, but only because they knew that they could leave us for long periods and we wouldn’t die.

Our parents, like us, were born to be stars…or at least they assumed they were and they had no qualms about reminding us that fact daily.  Unfortunately for them, they lacked the drive and ambition to never back down until they had everything they ever wanted.  The first challenge that was thrown in their path they decided to take the low road full of scavengers and sinners.

Our dad knocked up mom in the early eighties, when big hair rock bands were all the rage and theirs was seconds away from signing the record deal that would make their careers.

Then they found out about us.

The twins that ruined it all.

And all those long nights performing in whatever local hole they could find, bouncing from town to town just waiting for their big break was washed away.

Mom was no longer the singer that men would lust over.  Not when we ruined her body.  And our dad was so deep in the bottle I’m not sure he realized he was swimming in it.  Again, something that was blamed on us.

When their band fell apart, they decided hating us was almost easier than hating each other.  They had a common goal in their blame and right or wrong, to them we would never be anything other than a reminder of why they aren’t living their dream.

Their band mates obviously didn’t share the same bond that Weston and I have with Jamison and Luke.  God forbid I ever found myself in a position like my parents had been in, I know my boys would band together and the show would go on.

Because for us, this is it.

This is our future’s promise of a better life and even if for me it’s starting to look like more of a curse than a promise, it’s something that we would die before we gave up.

Unfortunately for me, I’m pretty sure that there are a few people that would love to make that happen.

I’m getting ahead of myself.  You’re probably wondering who am I.

I’m no stranger to you.  I’m on every magazine cover.  You open social media and I guarentee you there is a spondered post about my group.  Turn on the radio, boom – there we are.

I’m Wrenlee Davenport, lead singer of Loaded Replay, and I’ve learned the hard way that there is plenty of people in the world that would love to have a piece of me, but they don’t give one shit about the person behind the voice.

They see the persona.  The fake me that the record label loves to market as the sexy singer with the body of a sinner and the voice of a saint, but for me—I’m probably always going to be that stupid little girl that believes that my prince charming will come riding in on his black horse—because really, black horses are so much more badass than white ones—and prove to me that every little jaded piece of my heart is worth loving.

And he will love me for me.

Not the Wrenlee that, for more times than I care to admit, has to drink herself stupid just to face this fucking life I’m living.

Yeah… fame and fortune is far from everything I ever dreamed it was.

It’s my own personal hell and I pray that there’s something or someone out there that can prove to me that the world isn’t screwed because the majority of humanity is too busy licking the windows on the outside to see the beauty behind it.  All they care about is what’s at face value when what matters is skin deep.

I should feel bad for prince charming.  My knight in tarnished armor.  Because he’ll have one giant battle on his hands to make me believe that there might be someone left out there that doesn’t just want a piece of me.

Harper is a NEW YORK TIMES, WALL STREET JOURNAL and USA TODAY bestselling author residing in Georgia with her husband and three daughters. She has a borderline unhealthy obsession with books, hibachi, tattoos and Game of Thrones. When she isn’t writing you can almost always find her with a book in hand.