Welcome to today’s stop on the blog tour for The Cad and the Co-Ed by L.H. Cosway & Penny Reid!

Keeping a secret this big is going to take lots of balls. Specifically, rugby balls.

THE CAD
Bryan Leech is a cad.
Or, he *was* a cad.
No one is quite certain.

Once the quintessential playboy, Bryan claims he’s done with wild parties and weekend benders. No more one night stands leading to mornings he can’t remember; no more binges and blackouts; no more exploits plastered all over the tabloids and rag sheets. According to Bryan, he’s cleaning up his act.

The only problem is, no one believes him.

THE CO-ED
Eilish Cassidy never thought she’d be a mother at nineteen or still in college at twenty-four. Cut off from every member of her family except her favorite cousin, she’s finally managed put her life back together. Stronger and wiser, Eilish enters her last semester of university determined to stand on her own. Now she just needs to find an internship.

The only problem is, her best option—by far—places her directly in the path of her son’s father, and he doesn’t remember her at all.

THE PLAN
Bryan is determined to prove he’s changed. Eager to settle down with the right woman, he’s got his sights set on the gorgeous redhead who seems terribly familiar.

Eilish is determined to hide her secret. She’ll do anything to keep her child safe, even if that means ignoring her own wishes and desires.

But what happens when Bryan starts to remember? And what will it take for Bryan to convince the girl he forgot that she’s unforgettable?

I love Penny Reid and L.H. Cosway – individually, they’re such unique authors, but together, they make magic! They write the most endearing, quirky characters that are easy to love. After the snippet of The Cad and the Co-Ed in the previous Rugby book, I was DYING to read Bryan and Eilish’s story. I wasn’t sure how the authors would redeem Bryan and the awful way he treated Eilish, but I trusted them. And thankfully, they didn’t disappoint! Eilish and Bryan, despite their rough start, had the sweetest romance ever. They’re so weirdly adorable, which made for such a fun reading experience. If you’re a fan of the series or either authors, I highly recommend The Cad and the Co-Ed!

If you’ve read The Player and the Pixie, then you’ll know that when Eilish Cassidy was a naive nineteen-year-old, she fell for Bryan’s charms and gave up her virginity to him. She had stars in her eyes and thought they would have a future… but it turns out Bryan Leech was a cad, through and through. He was drunk during their one-night-stand, couldn’t even remember her name the next morning, and promptly kicked her out. He leaves Eilish with a broken heart… and a baby he’s never known about.

Fast forward five years, and Bryan has been through rehab to fix his drinking and partying ways. He’s a changed man… or is he? When Eilish sees Bryan again for the first time in years, she realizes that he doesn’t even recognize her or their one night at all. She’s not sure that she can trust that Bryan is sober now and safe to be around their son, Patrick. Can Bryan show Eilish that he’s there to stay and win the heart of the woman he forgot? And what will happen when he finds out about their secret baby?

“I’m sorry,” he whispered, still touching me, shifting his weight from one foot to the next.
“What for?” The question was out before I could catch it.
“For so many things. … Mostly for ever making you think you are anything other than magnificent and unforgettable.”

I thought that The Cad and the Co-Ed would be an angsty read, but it turned out to be so much sweeter and funnier than I expected! Eilish is hilarious and adorable, a great mother and a strong heroine. She definitely makes Bryan work to win her trust and heart. I loved her! And another surprise was how easily Bryan won me over with his changed ways. He’s done a 180 from drinking and partying 24/7 to sipping tea in his robe and wanting his neighbors to keep quiet at 10 P.M. He’s such a riot, and the way Sean, his rugby teammate and Eilish’s cousin, rags on him is SO funny.

This book is too freaking sweet. L.H. Cosway and Penny Reid make such a fantastic writing duo. Only they would be able to redeem a huge jerk from the previous Rugby book and make me love him. Eilish and Bryan have a slow, swoony romance that I adored. I’m really hoping there will be more in this series (Will!!!) because I can’t get enough of it! And I definitely have plans to go back and finally read the first book in the series! 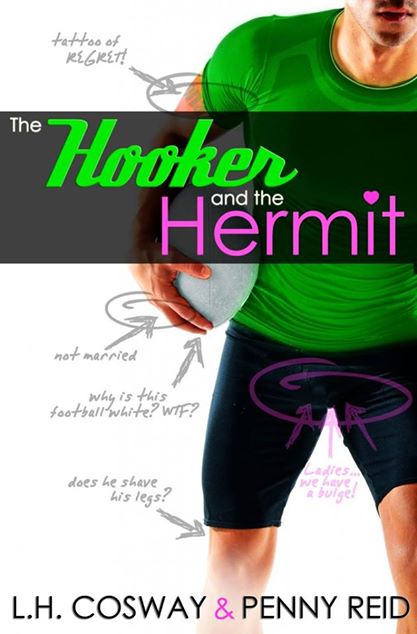 Enter to win a signed paperback of Royal Marriage Market, Beg Tease Submit, Letters in White, Love Walks In, Hooker and the Hermit, Player and the Pixie, Wasted Words and Changing Course!