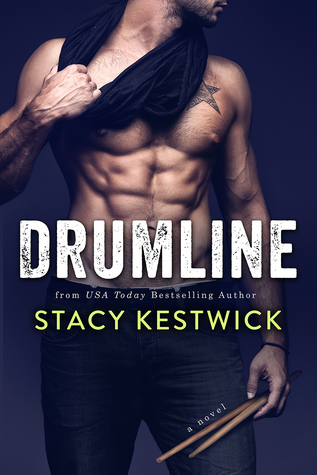 Traditions are important. Especially in the South.
College football. Rivalries. Tailgating. Halftime shows.
Some things just don’t change.
Until Reese Holland shows up with her long legs and no-bullsh*t attitude to audition for the prestigious all-male Rodner University snare line.
It doesn’t matter how much hazing she has to endure from Laird Bronson, with his narrowed green eyes and arrogant smirk. She wants that damn spot, and she’s more than good enough to earn it.
She expects there to be tension. Even friction.
But not sparks hot enough to burn the entire campus down.

Drumline was my first Stacy Kestwick book – I usually don’t read new authors without heavy recommendations from people I trust, but I just couldn’t resist a new adult college romance. It feels like it’s been forever since the last time I read a college romance, so Drumline came at the perfect time. I enjoyed it – it took me by surprise in a good way. If you love anything related to new adult, I highly recommend you give this book a try! It’s sweet, sexy, and just an overall fun read.

Laird Bronson is captain of the snare line, and as its his last year at school, he needs the band to go out with a bang. What he doesn’t expect is for a spitfire of a woman to audition for the previously all-male Rodner University snare line. He’s utterly enthralled by Reese Holland and can’t seem to resist her. She’s tough, gorgeous, ambitious, determined, and gives as good she gets. I fell a little in love with her myself right alongside Laird.

In spite of the wild attraction she feels for Laird, Reese isn’t about to let her feelings for the band’s captain get in the way of her earning her spot in the snare line. But Laird isn’t like any college boy she knows – he’s as sweet as he is alpha, and incredibly supportive of her ambitions. She tries to keep her distance but can’t help herself to the sexy wonder that is Laird.

I have to say that while I was a big fan of the romance, I wasn’t the biggest fan of the drama in Drumline, especially when it had to do with the antagonist. I could’ve done with less of it, but that’s just me. I’m sure many won’t have the same problem, but this was just the reason why I couldn’t fully love the story like I wanted to.

Drumline is full of sexual tension, sweet romance, and did I mention a snare line!? It was such a unique take on a college romance so I have to give props to the author. I may have to check out her other books now, but I do hope she writes more college romances in the future!

Now here’s an excerpt from Drumline! ❤

Being eaten alive had never felt so good.

His lips. His hands. His heat. My entire being was overwhelmed by him finally, finally touching me.

The kiss started hard, desperate, the inevitable conclusion to the tension that had been building between us for two weeks. With my eyes closed and my breasts flattened against the wall of his chest, I gave into it, surrendered to the moment. My mouth clung to his as he tilted my head to the side, changing the angle to deepen the contact.

His hands moved over me restlessly, hungrily, skimming down my back on the way to my ass, then back up my sides to frame my face, his fingers leaving a trail of heat behind on every inch of skin he claimed for himself. I pulled at his shirt while he pushed me against the solidness of the door. My heart tripped over itself in its race to keep up. Muffled sounds came from both of us, vibrating in our throats but not escaping our lips because we hadn’t even parted for a breath yet.

Who needed fucking air when Laird Bronson was kissing them? Not me.

His lips were somehow firm and soft at the same time as he slanted them over me again and again. It was like being called up to the major league from the minors. Nothing in my past compared. I shivered from the intensity of it, from the innate authority of his mouth as he consumed me. Like I was made to bend to him, as inevitable as the moon ceding to the sun.

I lifted on my tiptoes to get closer, one of my hands snaking up to tangle in his dark hair. The strands were barely long enough at the top to grip, and when I gave them a tug, he rolled his hips against me, showing me just how much he liked it. I moaned and felt an answering wetness gather at the juncture of my thighs.

Dear sweet rosy-cheeked baby Jesus and all the saints in heaven.

His mouth needed to come with a warning label. Danger. Highly flammable.

But it was too late. I’d had a taste and I liked the burn.

USA TODAY Bestseller Stacy Kestwick is a Southern girl who firmly believes mornings should be outlawed. Her perfect day would include puppies, carbohydrates, and lounging on a hammock with a good book. No adulting, cleaning, or bacon allowed.

Where to Find Stacy:

Drumline Prize Pack: Signed copy of Drumline, “I Have Some Nonfictional Feelings About Some Fictional Characters” tote bag, Stacy Kestwick water bottle, and lots of swag!