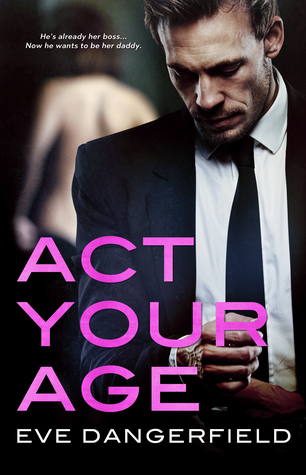 Act Your Age by Eve Dangerfield
Series: Standalone
Publication Date: September 27th 2017
Links: Ebook • Goodreads
Source: I received an ARC from the author in exchange for an honest review

Kate gets it. Kinks aren’t for everyone. Hell, they’re probably not for Mr. Henderson, her grumpaholic boss. She really shouldn’t have crush on him, but the man is just so goddamn stern. Sure, a lot of that comes down to ‘being her boss,’ but still, it feels like there might be something there.

Tyler Henderson is a golden boy who’s lost his shine. He’s old, his dream career is over, his fiancée’s left him. Now all the former firefighter can do is to try and bury his troubles in paperwork and hard liquor. He says ‘try’ because he can’t get Middleton out of his head long enough to wallow properly. He’s not going anywhere near the girl. HR issues aside, he’s done with sweetness and things don’t come sweeter than a cupcake-baking engineer who knits her own hats.

A case of mistaken identity causes Kate and Ty’s attraction to give way to blistering sex. They have more in common–and more to lose–than either of them realized. When it comes to unreasonable attraction you can rarely change your mind but can you act your age?

OOOOOHH. MY. GOD. This is without a doubt one of the BEST books I have read all year. I loved Act Your Age so hard. GAH! I haven’t read some good erotica in ages, but this book hit all the right buttons for me, though it might not for everyone – because daddy kink! I highly recommend this book if you love kink, humor, older, grumpy heroes, and adorable, flawed heroines!

Kate wasn’t sure why she had the kinks she had. She’d done enough research to know it wasn’t as simple as the vending machine theory of ‘insert daddy drama, out rolls a can of kinkiness.’

I’ll admit I’m one of the few who doesn’t mind the word ‘daddy’ in romances. Besides, whatever floats your boat, right? Well, as soon as I read the blurb for Act Your Age, found out it had daddy kink AND the hero was an older boss, I was sold. Turns out this book went above and beyond my expectations – I loved everything about it, from the funny characters, to the angst, to the hottest sex scenes I’ve ever read. I’ve become a fan of Eve Dangerfield for life thanks to this book!

Ty didn’t think Middleton was a great girl. He thought Middleton was a pain in the ass. Waltzing around with her shiny hair and long legs and her throaty voice, being cuter than a fistful of buttons. Where did she get off?

Can I get an amen for grumpy, surly heroes? Tyler Henderson is as grumpy as they come, though he has his reasons. His fiancée left him for another man, he’s no longer a firefighter (a job he loved), his current coworkers are sexist pigs, and oh, he has a kink that others might see as disgusting. The one good thing going for him is Kate McGrath, who everyone calls Middleton. But even his crush on her is a reluctant one, not only because she’s under his employ, but also because she’s twenty years younger than his forty-five years. But when the opportunity of a lifetime lands Kate in his bed, and he finds out that they share the same kinky tastes, who is he to refuse to take this perfect woman for him?

I love Kate so, SO much. She’s such a unique heroine – she’s tiny and adorable and quirky. She has ADHD, which has caused a lot of hurt in her past, but she doesn’t let that define her. She tries her hardest at her male-dominated workplace, and she tries to be social by joining a roller derby team. I have so much love and admiration for this girl!

Of the two of them, Kate is the one who is fearless in wanting to go all in with Ty. She doesn’t let her daddy kink shame her or hold her back. The chemistry between Kate and Ty is off-the-charts hot – these are two characters who want each other badly. But the emotional connection they share is what made this story.

“Do you think we’re weird?” Kate asked, because that was the thing she’d always been afraid to ask.
Ty pulled her into his arms. “We’re weird in the best possible way.”
“So… yes?”
He laughed. “Everyone’s weird Kate, we’re the perfect kind of weird for each other.”

Act Your Age has everything that I love in a romance – an older hero, a sexy kink, a lovable heroine, and angst. Eve Dangerfield brought out all the emotions in this book, and I couldn’t get enough of it. It’s a beautiful, heart-wrenching, hilarious, sexy as hell story that I highly recommend!