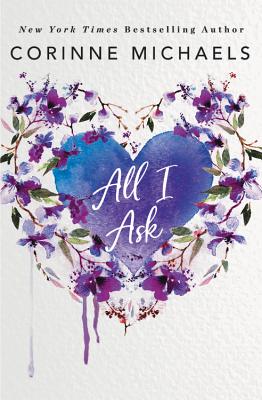 All I Ask by Corinne Michaels
Series: Standalone
Publication Date: March 17th 2020
Links: Ebook • Paperback • Audible • Goodreads
Source: I received an ARC from the publisher in exchange for an honest review

Teagan Berkeley is trying her best. A single mom raising a precocious teen, she may have given up on her dreams, but she’s accepted her life in her small beachside hometown. Now the one person who abandoned her when she needed him the most has returned, bringing back memories of what might have been.

Derek Hartz arrives in town with a teenage daughter-and he’s full of guilt over his failed marriage and the way he ended his friendship with Teagan. He’s determined to set things right with her, but first he needs to gain her trust, something he’s not convinced he deserves.

As Teagan and Derek open up to each other-and confess their deepest secrets-it’s impossible for them to deny what’s always been between them. But just when their happily ever after is within reach, their complicated history surfaces again and threatens to keep them apart. Forever.

I was so excited when I got an early copy of All I Ask. First, the cover is STUNNING. Second, two single parents! And third, it’s the (ex) friends to lovers trope. Which means all the angst and all the feels. So I am a bit disappointed that I couldn’t enjoy this book more. It’s not a bad read, just a frustrating one. You can tell Corinne Michaels knows how to write, but the miscommunication in this romance got on my nerves. It’s one of my biggest pet peeves when characters just don’t TALK to each other. The reason why our hero and heroine became estranged for over a decade was because they couldn’t express their feelings towards one another. This book is definitely a “it’s me, not you” kind of read, but if you also don’t enjoy reading about miscommunication, I would pass on it.

While the book is told in alternate POVs (IMO, there weren’t enough chapters from the hero), we also get two timelines: the past, when Teagan and Derek first meet in high school and fall in unrequited love, and the present, when they reunite for the first time in a decade as single parents. I have to say I wasn’t a big fan of the past chapters – they were boring and didn’t add all that much to the story because I could already tell how in love Teagan and Derek were through their present chapters. And, this is when they start keeping their feelings a secret and Derek uses his new fiancée to cope with the fact that he thinks Teagan doesn’t love him back. Did I also mention Teagan is pregnant by her deadbeat ex and Derek gets his fiancée pregnant? I guess no one uses condoms anymore. It just annoyed me to no end that they could’ve saved over ten years worth of hurt and heartache with a simple conversation.

The present day reunion is underwhelming. It starts off with some fantastic angst and I could just FEEL all the emotions and hurt from Teagan. Derek ghosted her, his best friend, like she didn’t mean anything to him. He stopped all communication with her and dropped off the face of the planet. I really wanted her to make him work towards earning back her trust and heart, but after maybe two conversations they start dating already. So that whole thing was anticlimactic. The thing is, I truly don’t believe Derek would’ve ever gone after Teagan, the woman he supposedly loved, if he didn’t become a widower. I never understood why he was okay living married but separated with his wife, a woman he didn’t love. So Teagan comes across as second best, his second choice, and that left a bad taste in my mouth.

The good things I did enjoy? The writing, which is solid, and Teagan’s daughter, who has such a personality. I’m sure I’m in the minority for this book, but I wanted more – more angst, more GROVELING, more chapters from the hero. And sadly, this just didn’t work for me.