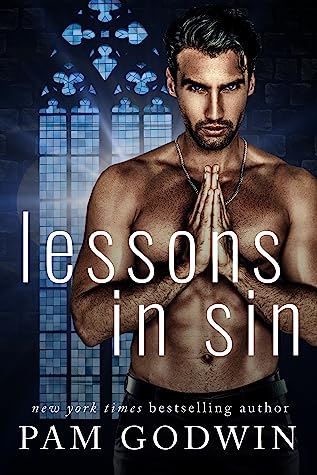 Lessons in Sin by Pam Godwin
Series: Standalone
Publication Date: June 29th 2021
Links: Ebook • Paperback • Goodreads
Source: I received an ARC from the author in exchange for an honest review

There’s no absolution for the things I’ve done.

But I found a way to control my impulses.

I became a priest.

As Father Magnus Falke, I suppress my cravings. As the headteacher of a Catholic boarding school, I’m never tempted by a student.

The bratty princess challenges my rules and awakens my dark nature. With each punishment I lash upon her, I want more. In my classroom, private rectory, and bent over my altar, I want all of her.

One touch risks everything I stand for. My faith. My redemption. And even my life.

As if that could stop me. I need her pain, and her heart, and she needs my lessons in sin.

“Forgive me, Father, for I have sinned. This is my first confession.” His breath left him. “I tried to seduce a priest.”

Well, Pam Godwin certainly delivered with this taboo, forbidden priest romance! Between a teacher/student (who is 18) with a HUGE age gap. It’s not too dark for a Pam Godwin book, but again, there’s taboo and plenty of kink. I adored our main characters, who are at each other’s throats from the moment that they meet. If you love Sierra Simone’s Priest or Tiffany Reisz’s The Original Sinners (both of which I do) and you’re looking for another priest to fall in love with, Father Magnus will be perfect for you.

Tinsley Constantine is the youngest of her insanely powerful, wealthy family. When this heiress is caught giving a BJ to a Burger King employee, her mother sends her off to an all-girls Catholic boarding school to reform her naughty ways. Her new teacher/disciplinarian is Father Magnus Falke, who is as cold and cruel as he is gorgeous, even at 40. Tinsley knows the best way to get herself kicked out of school is to make her teacher’s life hell, but unfortunately for her, Magnus knows how to give it right back.

Tinsley is such an awesome heroine! I loved her strength and sassy, unfiltered mouth. Even though she tries to show Magnus her worst, he sees her intelligence and compassion underneath, which draws him in. Tinsley is insanely attracted to Magnus, but it’s during their one on one sessions that she slowly starts to fall for him. I loved the progression of their romance, from hating each other and constantly arguing to having genuine, thoughtful conversations which then turn into something steamy and forbidden. Pam Godwin truly makes you believe in their love and romance despite the many, many obstacles between them.

The ending was perfection!! So much angst and heartache, but just as much love and romance too. My heart was swooning. Magnus might be an asshole, but he’s one who loves with all of his heart. I had the best time reading Lessons in Sin – it was exactly what I wanted from Pam Godwin!

Also! Apparently the entire Constantine family is getting their books (some already have) but they’re being written by different authors. I’m really looking forward to K. Webster’s, who wrote about Winston, the oldest!