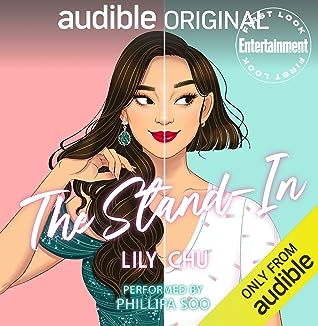 The Stand-In by Lily Chu
Audiobook Publication Date: June 15th 2021
Length: 10 hours and 55 minutes
Narrated by: Phillipa Soo
Links: Audible • Goodreads
Source: I received an audiobook from the publisher in exchange for an honest review

How to upend your life:

Gracie Reed is doing just fine. Sure, she was fired by her overly “friendly” boss, and yes, she still hasn’t gotten her mother into the nursing home of their dreams, but she’s healthy, she’s (somewhat) happy, and she’s (mostly) holding it all together.

But when a mysterious SUV pulls up beside her, revealing Chinese cinema’s golden couple Wei Fangli and Sam Yao, Gracie’s world is turned on its head. The famous actress has a proposition: Due to their uncanny resemblance, Fangli wants Gracie to be her stand-in. The catch? Gracie will have to be escorted by Sam, the most attractive – and infuriating – man Gracie’s ever met.

If it means getting the money she needs for her mother, Gracie’s in. Soon Gracie moves into a world of luxury she never knew existed. But resisting Sam, and playing the role of an elegant movie star, proves more difficult than she ever imagined – especially when she learns the real reason Fangli so desperately needs her help. In the end, all the lists in the world won’t be able to help Gracie keep up this elaborate ruse without losing herself…and her heart.

I enjoyed The Stand-In so much! I loved the fun concept of standing in for a celebrity because you’re a lookalike. The audio is narrated so well – Phillipa Soo does an incredible job bringing not just Gracie, but also Sam and Fangli to life. And look at that beautiful cover! If you love romances set in the movie star world with all the glitz and glam (as well as the not-so-glamorous side), I highly recommend you try this audio.

Gracie Reed is our Chinese-Canadian heroine who looks so much like famous Chinese actress Wei Fangli that she’s offered the chance of a lifetime by Fangli to take the movie star’s place temporarily. In exchange for money that will help put Gracie’s mother in a nursing home, Gracie will pretend to be Fangli, go to fancy events, and accompany Fangli’s friend and supposed boyfriend, Sam Yao, who also just happens to be the sexiest man alive. How can a girl say no to all of that?

This story was so much fun! I loved watching Gracie learn how to enter and be a part of this world of wealth and fame. The developing friendship between Gracie and Fangli was lovely to read. As she gets more comfortable in her new role, Gracie also learns that Fangli’s life isn’t as perfect and fancy as she thinks. There are great discussions about anxiety and depression between them.

The romance between Sam and Gracie is definitely a highlight. They are prickly with each other right from the start. Sam is quite judgmental and arrogant but Gracie is quick to knock him off his pedestal. I adored the banter between them and their slow burn enemies-to-lovers romance. Though I will admit that towards the end of the book Gracie asks Sam to do something that made me totally side-eye her.

The Stand-In is an entertaining and surprisingly down-to-earth read. All of the characters have their own flaws but that makes them all the more endearing and relatable. It’s a great audio to pick up!

One thought on “Audiobook Review: The Stand-In by Lily Chu”