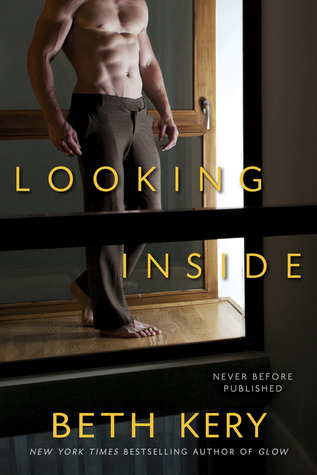 Looking Inside by Beth Kery
Series: Standalone
Publication Date: November 1st 2016
Links: Ebook • Paperback • Audible • Goodreads
Source: I received an ARC from the publisher in exchange for an honest review

The New York Times bestselling author who brought you Glow, Glimmer, and The Affair is back with a new novel that will have you leaving the curtains open.

Are you just going to stand there and watch?

Eleanor Briggs just can’t help herself. The sight of the man in the high-rise across the street is driving her wild. She longs to feel his touch up close and personal. To win him over, she’ll need to shake off her wallflower sensibilities and become the seductress she never imagined she could be. The only trouble will be finding the perfect way to meet him…

Or are you going to join in?

Sex is easy for millionaire entrepreneur Trey Riordan. Finding something of substance, however, seems impossible. That is until a simple night of reading at a local coffee shop becomes something far steamier when a beautiful brunette comes by and leaves a note telling him to look out his bedroom window at eleven o’clock. But when the time comes, neither of them will be truly ready for what follows…

Looking Inside took me by surprise in the best way possible. Going in, I was expecting just a steamy erotica with an exhibitionism/voyeurism theme, but it turned out to be so more more than that! I don’t believe I’ve read any of Beth Kery’s books before, but if they’re as incredible as this one was, I’ll definitely have to get on that. I love her writing and I loved the main characters of Looking Inside. Trey and Eleanor were so much fun to read about – I would highly recommend this book to erotica lovers!

For months, Eleanor Briggs has been looking out her window to catch a glimpse of the gorgeous man in the high-rise across the street. She’s seen him a total of seven times, but six of them were of him having sex, and every time Eleanor imagined that it was herself underneath him and experiencing all the kinky things he’s inclined to. One day, she gets the chance to meet the one and only Trey Riordan and transforms herself from her quiet, boring librarian self to a confident, sexy, sultry woman she wishes she truly was. The moment they meet in person, the insta-lust goes haywire – I loved the chemistry between these two!

Trey is an absolute sweetheart. For all the money he has, he’s very down-to-earth, though he does have alpha tendencies. He’s been burned enough times by women who only want him for his money, so he’s put his romantic life on the back-burner, but the second he meets Eleanor, he wants her bad. Along the way, though, he starts falling for her, too – but he’s the kind of man who values honesty and trust, and he’s been falling for a version of Eleanor that’s only a persona… or is it?