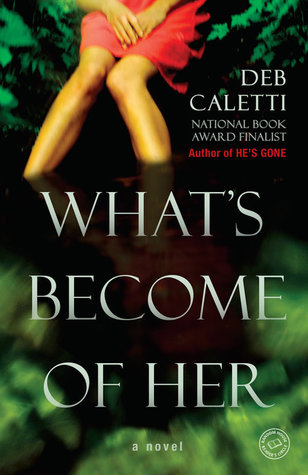 What’s Become of Her by Deb Caletti
Series: Standalone
Publication Date: April 18th 2017
Links: Ebook • Paperback • Hardcover • Goodreads
Source: I received an ARC from the publisher in exchange for an honest review

From National Book Award finalist Deb Caletti comes an emotionally riveting story of a woman falling for a man who may be hiding a dangerous secret—perfect for readers of Jodi Picoult and Kristin Hannah.

Isabelle Austen returns to her hometown on a small, isolated Pacific Northwest island to take over the family tourism business after the death of her mother, a disapproving parent and a hard woman to love. Feeling lost, Isabelle is also struggling with a recent divorce and wondering if she’ll ever come into her own. Then her life takes a surprising turn: The mysterious Henry North arrives on Parrish Island, steps off a seaplane, and changes Isabelle’s world forever. From the beginning, their relationship is heady and intense—then Isabelle learns of Henry’s disturbing past, involving the death of a fiancée and the disappearance of a wife. Suddenly Isabelle is caught between love and suspicion, paranoia and passion, as she searches for the truth she may not want to find—and is swept into a dangerous game she may not survive.

I used to read Deb Caletti’s YA contemporaries back in middle/high school, so when I heard she was releasing a suspense/thriller, I was intrigued enough to read it. It’s not my favorite genre, but I thought I’d give it a try to see how the author would play it out.

Isabelle Austen returns to her hometown on Parrish Island, only to take over the family tourism business because her mother recently passed away. Struggling to recover from her recent divorce, Isabelle is lost and vulnerable. It’s at this point that she meets a tourist, Henry, who begins to spend time with her and ask her out. She’s attracted to him and falls easily for him, but when a friend investigates Henry’s past and finds a dead fianceé and a dead wife, both who died of mysterious circumstances, Isabelle has to wonder if she should be afraid.

She finds out that Henry is not who she thinks he is… which causes her to make poor decisions while she’s wrapped in her paranoia and confusion. Thanks to her bad decisions, the suspense is both mysterious and frustrating, but it definitely kept me hooked and flipping the pages.

I was perplexed and intrigued by Isabelle’s character – I kept wondering why she stayed with Henry when everyone else tried to warn her off. Her decisions make her a flawed, frustrating, but addicting character. I found myself still rooting for her even when I didn’t agree with what she did.

This book is full of mystery and unanswered questions. I’m still not sure what to make of it, but it definitely succeeded in the mystery/suspense aspect. I’m excited to see if Deb Caletti will be writing more thrillers!