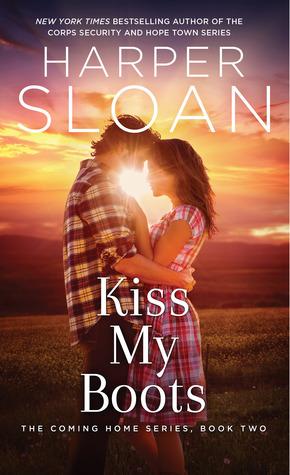 In this second of the sultry, Western-set Coming Home series from New York Times bestselling author Harper Sloan, Quinn Davis might finally have a shot at her own happily-ever-after—but will she let love in, or will she tell it to go ahead and kiss her boots?

Quinn Davis prefers to live her life quietly. She’s the stereotypical tomboy with two overprotective big brothers who have always been there to protect her, especially from devilishly handsome cowboys with silver tongues. That is, until Tate Montgomery comes riding into town. Their first meeting, however, is far from something out of a fairy tale and only further convinces Quinn that men aren’t worth her time.

The only place Tate Montgomery ever truly felt at home growing up was during the long, sweltering summer months he spent at his Gram and Paw’s farm in Pine Oak, Texas. Now, Tate has returned to his childhood sanctuary seeking a fresh start—but if he’s being entirely honest, he’s not just back for the wranglers and Stetsons. During those summers, Quinn was a friend-turned-young-love who Tate lost when life threw him a curveball and he cut all ties to his past; but all it takes is one glance at the raven-haired beauty he did his best to forget for him to realize just how much he’s been missing….

Nine years ago, best friends Quinn Davis and Tate Montgomery moved their friendship to the next level and gave each other their love, hearts, and bodies. With Tate about to leave for another state to go to university and eventually medical school and Quinn staying to take over her family’s auto shop, they swore to each other they wouldn’t let anything tear them apart, especially not distance. But when Tate seemingly abandons Quinn after he leaves, leaving her calls and emails unanswered, what can she do but move on from the only boy she ever loved who broke her heart?

Though Tate was forced to disappear from Quinn’s life, there was never a moment he forgot about the one girl who owned his heart and soul. Now, almost a decade later, he’s finally free to pursue the one girl, now woman, meant for him. He is determined and willing to do anything to prove to Quinn that he will never leave her or break her heart again – but can he fix the heart he shattered all those years ago?

I’d grovel until my knees have no skin left on them. If I get back and find another man in my place, I’ll fight for her regardless. If she forgot how to love me, I’ll remind her. Whatever it takes.
No more regrets.

Y’all, I was PREPARED for all the groveling I was expecting to read in this second chance romance. Unfortunately… though determined to grovel, Tate doesn’t actually have that much groveling to do. His reason for leaving Quinn is legitimate, and despite wanting to see more groveling, I was fine with the little there was. Quinn herself puts up a tough front but melts like chocolate when she’s around Tate. She takes a leap of faith this second time around hoping that this time Tate will catch her before she falls.

“You finally know the man I am now?” I ask…
“I’d know him anywhere,” she breathes.
“You givin’ him your forever?”
“God, yes.”
“Never, Quinn. I’ll never spend another day without you in it. You hear me? …I’ll spend every day makin’ up for the time we lost. That pain will never touch you again.”

The romance is so, so sweet between these two characters. There’s not much groveling, but I could still FEEL how much Tate still loves Quinn and worships the ground she walks on. He’s sexy and oh so determined to prove his love for her once again. Quinn is a bit dramatic yet a total sweetheart. She’s nervous about giving her heart over to Tate again but brave enough to do so. She still makes Tate work for it this second time around, but there’s no doubting that he’s the only man to ever own her heart.

I’d always thought home was a place, but he’s right: our home is right here, in each other’s arms.

I loved the fact that neither Tate nor Quinn were celibate during their separation. I HATE when in this trope only the heroine remains celibate while the hero sleeps with whoever he wants. It gets on my nerves so much, so I appreciated what Harper Sloan did, having them on fairly even ground when they see each other again. What did aggravate me sometimes was the overwhelming amount of dropped g’s in the dialogue. I get it, it’s set in the South, but I really didn’t need it shoved in my face, LOL.

Other than that, Kiss My Boots was an entertaining second chance romance I had a lot of fun reading. It was a book brimming with love, passion, and romance. I couldn’t get enough of Tate and Quinn’s devotion for each other! Now, I will definitely be going back to read the first Coming Home book, and possibly other Harper Sloan novels! 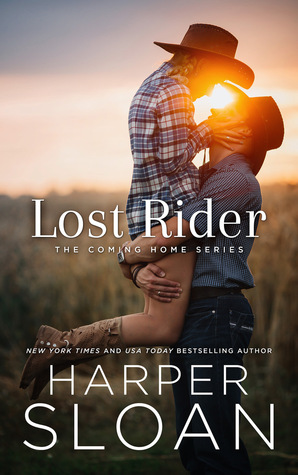 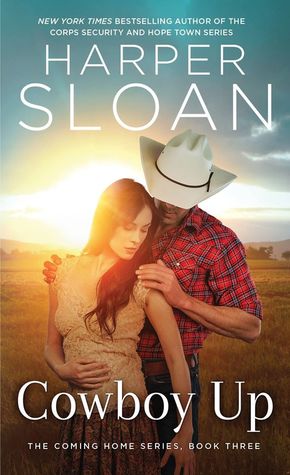 Harper Sloan is the New York Times and USA Today bestselling author of the Corps Security and Hope Town series. She started writing as a way to unwind when the house went to sleep at night. Harper lives in Georgia with her family.

One Paperback Copy of Lost Rider by Harper Sloan
US only

July 22
From the TBR Pile

July 28
The Reading Addict
Reading Between the Wines