The Ending I Want by Samantha Towle is now live! 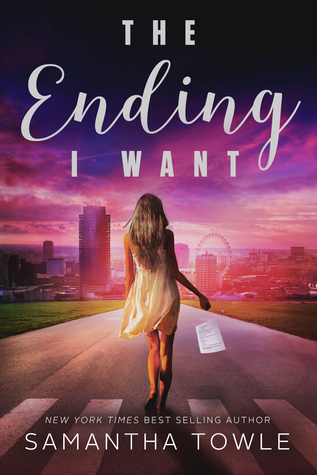 The Ending I Want by Samantha Towle
Series: Standalone
Publication Date: May 10th 2016

Taylor Shaw had the perfect life—until she was sixteen. That was when everything changed. From that moment on, life went from bad to worse…to the worst.
After recovering from a brain tumor, months later, she suffers the tragic loss of her whole family.
Since that fateful day, she’s been coasting through life.

Now, the brain tumor has returned, and Taylor decides she’s had enough. She’s going to take her fate into her own hands.
No more hospitals. No more surgeries. No more anything.
She’s going to join her family.
It’s her decision.
What she longs for.
The ending she wants.

She just has a list of things to do before she goes.
First, go to England.
Second, kiss a stranger…

Only, Taylor didn’t expect Liam Hunter, the stranger—with his handsome face, his six-foot-three of gorgeousness, and his oh-so-hot English accent—to change things.
To change her.
To change the ending she wanted.

What is a girl, who is standing on the edge of nothing, to do when offered the chance of everything?

A NOTE FROM THE AUTHOR

Writing The Ending I Want has been a cathartic and exhausting process for me, but I have loved every second of writing it. I relate to this story more than any of the stories that I’ve written before. Maybe that’s because there’s a piece of me in this book. And not in Taylor having a brain tumor, because fortunately I’ve never had to endure anything like that. But for me, it was the need to feel free from something that has crippled me for many years, just like Taylor is crippled by her own pain. Taylor wanted to die to be free. I never wanted to die, but I did want to be free, in a way that’s hard to explain. But now, after years of feeling trapped by my demons, things that have held me back in life, I’ve found a way to get the freedom I needed. I’m still a work in progress, but I’m working better now than I ever did before – just saying this cryptic stuff out loud is a big step for me. So, writing Taylor in the way I did was a big deal for me. I really hope that you love this story, and see strength in Taylor’s choices rather than weakness.

Ever since I read The Storm series, I’ve been a big fan of Samantha Towle’s. I get super excited for every one of her releases, so when I heard about The Ending I Want (and saw the gorgeous cover), I couldn’t wait to get my hands on it! While I didn’t completely love it, it’s certainly an emotional, if frustrating, read. While I can’t say there was anything particularly unique about the story or characters, if you’re a long-time fan of the author, you just might love this book!

Taylor Shaw knows she’s dying. She had a brain tumor once at sixteen, and she knows it’s back again at twenty-two. But rather than sit passively waiting to die, she’s made somewhat of a bucket list that she’s determined to complete before the end. On her flight to London, she encounters the gorgeous Liam Hunter, with whom she completes the first item on her list: kiss a stranger. Turns out the chemistry between them gets hotter than ever after that kiss, and even though she knows she shouldn’t, she allows Liam to sweep her away on a whirlwind romance and adventure… all the while keeping her terminal illness a secret from him.

I really wanted to love this book… but it only ended up an okay read. I liked some parts, but others frustrated me. I skimmed some of the steamy scenes because they were getting to be too much. The romance… well, I didn’t really FEEL the connection between Liam and Taylor. The lust is strong between them, but the love takes a little while to understand. Their whole trip takes less than two weeks, which meant it takes about a week for them to fall in love, which was a little too unbelievable to me. Still, I did enjoy the sweet, tender moments between them, and Liam is certainly an alpha hero. I liked that he was willing to do anything and everything for Taylor, and with his wealth, he certainly could. The Ending I Want might not be my favorite Samantha Towle read, but I’m still a big fan of hers and I look forward to more books from her! Now here’s an excerpt from The Ending I Want! ❤

“Go to England. Kiss a stranger. Have lots of sex,” his deep voice rumbles out the words I wrote.

He glances at me over his shoulder, a shit-eating grin on his face.

I don’t even bother with trying to get the list back now. What’s the point? He’s already seen it.

I fall back into my seat, my face feeling like a blowtorch went at it. “You’re an asshole,” I mutter.

He turns to face me, my list in his hand but still held out of my reach. “Aw, don’t be like that, Taylor, from Boston. I was just curious to read it.”

I glare at him. I’m going for death-by-laser stare.

It doesn’t work because he gives me a panty-dropping smile. I’d like to say I’m unaffected, but I’m not; however, I don’t let him know that.

“Curious? I don’t think so. An effing thief? Yes.”

I give him the middle finger.

He laughs again and looks back to the list. Then, he stops laughing and stares at me with what can only be described as complete horror. “You’ve never had oral sex?”

Why the hell did I put that on my list?

She has also written paranormal romances, THE BRINGER and the ALEXANDRA JONES SERIES, all penned to tunes of The Killers, Kings of Leon, Adele, The Doors, Oasis, Fleetwood Mac, and more of her favourite musicians.
A native of Hull and a graduate of Salford University, she lives with her husband, Craig, in East Yorkshire with their son and daughter.