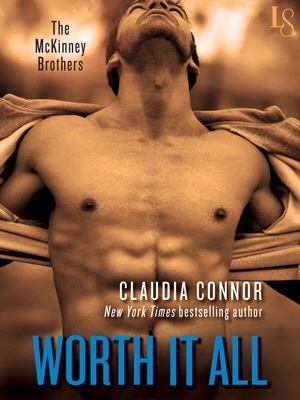 Worth It All by Claudia Connor
Series: The McKinney Brothers #3 (full reading order below)
Publication Date: April 19th 2016
Links: Ebook • Audible • Goodreads
Source: I received an ARC from the publisher in exchange for an honest review

She’s fighting for control. . . . Paige Roberts learned to fend for herself growing up. Now she’s doing everything possible to give her daughter, Casey, the stability she never had. But when the vivacious five-year-old decides she’s done wearing her prosthesis, Paige faces her toughest challenge yet: trusting a handsome, brooding stranger who simply wants to help.

He’s struggling to connect. . . . JT McKinney lost more than his leg in a car accident that stole his dreams of pro football. Eight years later, he’s made a new life for himself far away from his old one. His business is developing cutting-edge prosthetics and he’s more than happy to turn his attention to machines instead of people. Still, he can’t shake the feeling that something’s missing.

Will they take a chance on love? . . . When JT gets the chance to help Paige’s daughter, he takes it. He never planned on the two of them tearing down his walls or teaching him to believe in himself again. Paige might not believe in happily ever afters, but JT wants more than anything to be her prince. They’ll both have to let go of the past if they want a future.

I love The McKinney Brothers!! Well, the two books I’ve read of the three in the series. The first, Worth the Fall, is one of my favorite audiobooks ever, so when I had the chance to read the third, I jumped right in. I’m such a sucker for romances where the hero who falls for a single mom and her child(ren) – my heart just melts reading about a sexy alpha turning into mush for a child. Gah! So Worth It All was pretty much the perfect contemporary romance for me – it’s sweet, heart-melting, drama-free, and did I mention sweet?

What would it be like? To love a man and have him love you back. To be with one person forever and make a real family like the ones she’d seen here. She hadn’t thought it was real. Hadn’t believed in it at all.

Paige Roberts has been working her butt off to provide for her 5-year-old daughter, Casey, everything that she never had as a child – safety, security, stability, love. It’s not easy working two jobs while also caring for a daughter who doesn’t want to wear her leg prosthesis anymore. But when a gorgeous, kind-hearted man enters her life who has the power to help not only Casey, but also Paige, will Paige be willing to risk her heart for love?

JT McKinney’s life was turned upside down after a car accident causes him to lose his leg, his football scholarship, and something even more devastating that still haunts him to this day. He’s got scars inside and out, but he’s been able to pick himself up and become a biomedical engineer who uses his experiences as an amputee to help develop top-of-the-line prosthetic equipment. Jake is a GOOD guy – and when he meets Paige, he wants to do everything he can to make life easier for her. He’s utterly sweet and sexy with Paige, always there for her and making her feel like the amazing woman and mother that she is. And Jake with her daughter Casey? SWOOON!!! I died every time these two were together. Understandably, Paige is wary of starting anything with a man, but Jake is determined to make her see that the three of them would make the perfect family.

He loved Casey and Paige more than himself. He wanted to give them everything, wanted to do what was best for them. And he always would.

Worth It All is a heartfelt, gentle love story that will leave you with a smile on your face. The pages flew by quickly and easily – I really didn’t want to put it down. If you love a hero who is perfect with children and want to read a romance that won’t disappoint, I highly recommend this book – and series! Welcome to today’s stop on the blog tour for Worth the Risk by Claudia Connor!

When a McKinney brother falls in love, powerful emotion and overwhelming desire are never far behind.

Two hearts locked away . . . Hannah Walker spends her days coaching children through injury and trauma, one therapeutic horseback ride at a time. She knows all too well how violence can change a child and leave scars that never heal. It’s easy for her to relate to the kids; what isn’t easy is the thought of facing her own harrowing past.

Millionaire playboy Stephen McKinney could use a little coaching himself. Five years ago he encountered his most horrible nightmare—and the nightmare won. No matter what he achieves, nothing can make up for that awful night . . . or so he believes.

Both desperate for a second chance . . . Stephen is used to getting what he wants. And he wants Hannah. So when she turns him down, he’s intrigued. What he doesn’t know is that her secrets will lead him to a place he never wanted to go again . . . to a side of himself he’s tried to forget . . . a side that would scare Hannah away from ever loving him. Now his only chance to win her trust is to bare his soul, risking everything he tried so hard to protect.

Now here’s an excerpt from Worth the Risk! ❤

Your table’s ready,” the hostess interrupted, and motioned toward the main dining room.

He angled his head down close to her ear. “I hope you don’t mind. We can still have a drink at the bar if you want.”

“No. It’s . . . fine.” And really hard to think with Stephen’s hand splayed at her lower back, guiding her with gentle pressure behind the hostess.

Stephen pulled out her chair at a table for four like a perfect gentleman, then, instead of taking the seat across from her, he sat directly to her left.

The waiter promptly introduced himself and reeled off the specials as Stephen gave the wine list a once-over. “Do you have a preference?”

No. She didn’t know wine. Didn’t eat or drink fancy food. Didn’t really drink at all. And had made a date for drinks with a fancy man. Brilliant, Hannah. Excellent decision making. “I’m good with water.”

He ordered an iced tea, then turned his undivided attention on her. “I thought we could have dinner. It’s quieter here, easier for us to talk.”

Talk. Right. Which would be good if she had any idea what to say. She smiled, nodded, still getting used to being this close to him.

“Neither was I.” She tried to smile under his scrutiny, twirled a piece of hair around her finger, caught herself, and let it go. “You had other plans tonight?”

“I did. And then I didn’t.” He picked up his water glass and leaned back. “And so did you, if I remember.” The corners of his mouth turned up the slightest bit, his deep brown eyes exuding every bit of confidence she didn’t feel.

“Yeah.” She bit her lip, wishing she hadn’t brought it up. “I had this thing with my brothers.”

“Ah.” He drew out the word like he’d just uncovered an important secret. Like it was everything he needed to know.

Luckily the waiter arrived before she could make another verbal stumble. He asked for their order and her hands flew to the menu. Seconds ticked by as she scanned too many choices.

“Should I come back?”

A woman laughed across the room, her shimmering silk catching the light as she leaned into the man next to her. Hannah felt the heat creeping into her cheeks. Bad idea. This had been such a bad idea. She didn’t belong here.

“What about the filet medallions?” Stephen suggested. “Or you can think about it. No rush.”

There was a moment of uncomfortable silence, at least on her part. Stephen looked perfectly relaxed. He sipped his iced tea, the heavy watch around his thick wrist reflected the candlelight. He had big hands. So . . . male. Radiating confidence with his commanding presence, while she was pretty sure she was radiating the opposite. Maybe next time she should consider stepping out of her comfort zone, instead of giving herself a full-out shove.

He stared at her and she found herself wanting to do the same to him. To gaze at that perfect mix of gorgeous and hard edge. At eyes like smooth melted chocolate. His lips firm and masculine. She wondered—

Claudia Connor is a New York Times and USA Today Bestselling author of heartfelt contemporary romance. Claudia attended Auburn University, where she received her undergraduate and masters degrees in early childhood education, and completed her studies in Sawbridgeworth, England. Always a lover of happy endings, she enjoys movies, reading, and travel, but spends most of her time typing out the love stories of the almost real people that live in her head. Claudia lives near Memphis, Tennessee, with her husband and three daughters.

$25.00 Gift Card to the eBook Retailer of the Winner’s Choice + Loveswept Mug and Romance at Random Nail Polish

What’s the last dark romance you read?
Who’s your favorite Addicted series couple? 👀 Mine will forever and always be Rose & Connor, but Lily & Lo are a close second, because they were the reason I fell in love with the series!
Have you ever ordered a book from another country? Living in the US, I know how lucky I am to save on a lot of shipping costs (thank you USPS for media mail lol) BUT as soon as I saw @indigo had a special edition for THE WALL OF WINNIPEG & ME by @marianazapata, I had to add it to my MZ collection, even with the shipping from Canada 😂 Just look at it, it’s so cute!
Have you ever supported a campaign on Kickstarter? There’s been so many campaigns lately for authors, especially romance authors, and I’m here for it!
What’s your favorite Bridgerton book? My top one will forever be TO SIR PHILLIP, WITH LOVE! It’s got a tortured hero who’s also a single dad, 2 adorable kids, and ELOISE!!!!
D.C. was a blast! Mainly because I found perfect street sign for me 👀 Do you think I should’ve taken it home with me? 😂