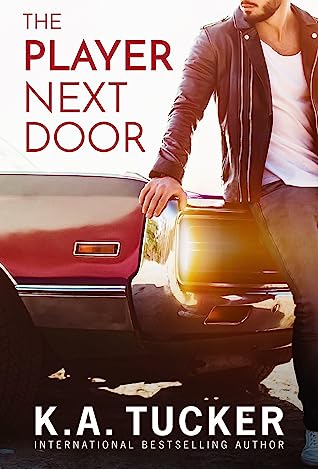 The Player Next Door by K.A. Tucker
Series: Standalone
Publication Date: June 16th 2020
Links: Ebook • Paperback • Goodreads
Source: I received an ARC from the author in exchange for an honest review

From the international bestselling author of The Simple Wild and Ten Tiny Breaths comes a new second-chance, hate-to-love romance.

Scarlet Reed has returned to Polson Falls, convinced that twelve years away is long enough to shed her humiliating childhood identity as the town harlot’s daughter. With a teaching job secured and an adorable fixer-upper to call home, things in her life are finally looking up.

That is, until she finds out that Shane Beckett lives next door.

Shane Beckett, the handsome and charismatic high school star quarterback who smashed her heart. The lying, cheating player who was supposed to be long gone, living the pro football dream and fooling women into thinking he’s Prince Charming. Shane Beckett, who is as attractive as ever and flashing his dimples at her as if he has done no wrong.

Scarlet makes it abundantly clear that old wounds have not been forgotten. Neighbors they may be, but friends they most certainly are not. She won’t allow herself to fall for the single father and firefighter again, no matter how many apologies he offers, how many times he rushes to her aid, or how hard he makes her heart pound.

But as she spends more time with him, she begins to fear that maybe she’s wrong. Maybe Shane has changed.
And maybe this time she’s the one playing herself—out of a chance at true happiness.

I am such a big fan of K.A. Tucker, so when I heard she’d be releasing a new standalone with summer vibes, I couldn’t wait to get my hands on it! Also, I’m always a sucker for both second chance romances and single parent romances. I ended up enjoying Shane and Scarlet’s story – it’s both sweet and dramatic, if that makes sense. If you want a summer read with a swoony hero and lots of unresolved tension, give The Player Next Door a try!

Scarlet has returned home after being away for twelve years to be a school teacher. She packed up and never looked back as soon as she could, not wanting to deal with heartbreak and her narcissistic mother any more. But she’s moved into the cute little house she always admired, not knowing that her next door neighbor is none other than the guy who broke her heart and caused her to want to leave: Shane Beckett. Who also happens to be the father of one of her new students.

This romance is a bit of an enemies to lovers one, at least on our heroine Scarlet’s side. She hasn’t forgiven Shane for breaking her heart over a decade ago and isn’t about to make it easy for him to try to get her to give him a second chance. I love a heroine who makes a hero work for her affections, though I do feel Shane could’ve groveled a bit more rather than say it was something that happened so long ago. There’s plenty of chemistry, of push and pull, between Shane and Scarlet to make this romance exciting and fun.

The main reason I’m not rating this higher is that I felt a bit disconnected from our main characters. I liked them, but I never truly connected with their stories. I may have rolled my eyes a bit at some of the miscommunication and it wasn’t quite as light and fluffy as I expected. But still, it’s a quick, sweet (which mostly comes from our charming hero and his son) romp with a dash of drama (from our heroine) that will make this a fun summer read!