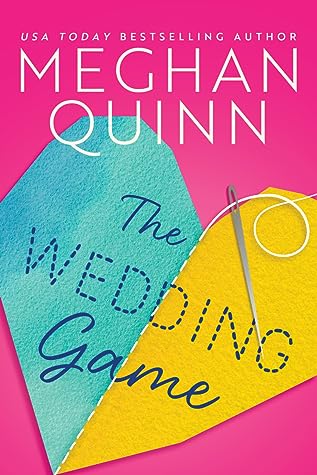 Luna Rossi is a veritable crafting genius—she can bedazzle and bead so hard her Etsy site is one of the hottest in the world. So it’s only natural that Luna would convince her brother and his husband-to-be to compete on The Wedding Game, a “do-it-yourself” TV show, for the title of Top DIY Wedding Expert.

As a jaded divorce lawyer, Alec Baxter scoffs at weddings and romance. But when his recently engaged brother begs him to participate in The Wedding Game, Alec grudgingly picks up a glue gun and prepares for some family bonding.

Both fierce competitors, Luna and Alec clash on national TV as harsh words and glitter fly with abandon. But as they bicker over color swatches and mood boards, they find themselves fighting something else: their growing mutual attraction. While Luna is torn between family loyalty and her own feelings, Alec wonders if he might have been wrong about love and marriage all along…

I love romances that center around TV show competitions, but I’ve never read one about a DIY wedding competition! The Wedding Game is a fun, quirky rom-com from Meghan Quinn, featuring a DIY expert and a jaded divorce lawyer who compete to create the ultimate dream wedding for their brothers.

Luna loves her brother Cohen and wants the best for him and his fiancé. So when she see the chance to enter a competition to win a penthouse and dream wedding, she signs them up. With her DIY skills as the owner of a famous Etsy store, she’s sure to win. Alec is a hot-shot lawyer with a strained relationship with his younger brother Thad. Thad used to idolize Alec growing up, since Alec was the only one in their family to take care of him. But now, after leaving Thad to pursue his career and never checking back in, Alec feels guilty and wants a chance to mend their broken relationship. When newly engaged and soon-to-be father Thad asks Alec to join him on The Wedding Game, he can’t say no.

Luna and Alec’s romance is so much fun. It’s a great enemies-to-lovers romance with plenty of banter and bickering, especially while they’re on set and fighting for the number one spot. I enjoyed the slow progression of their romance, and there was some good added drama with trying to keep their new relationship a secret from the TV crew and their brothers. Cohen, Thad, and their respective fiancé(e)s were also really entertaining! They brought so much humor and heart to the story. I didn’t mind at all that they almost stole the spotlight from Luna and Alec’s romance.

The Wedding Game is a great read if you want a light-hearted romance with strong family ties. It’s got a great cast of characters, some silly humor, and a whole TV show competition. Right now I’m really hoping we get a book for Luna and Alec’s best friends!