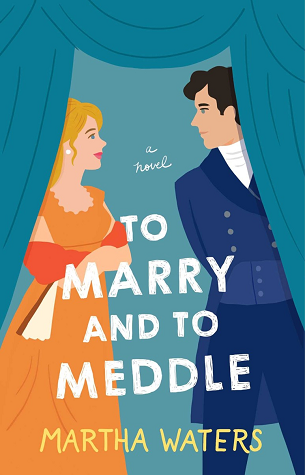 To Marry and to Meddle by Martha Waters
Series: The Regency Vows #3 (full reading order below)
Publication Date: April 5th 2022
Links: Ebook • Paperback • Audible • Goodreads
Source: I received a copy from the publisher in exchange for an honest review

The “sweet, sexy, and utterly fun” (Emily Henry, author of People We Meet on Vacation) Regency Vows series continues with a witty, charming, and joyful novel following a seasoned debutante and a rakish theater owner as they navigate a complicated marriage of convenience.

Lady Emily Turner has been a debutante for six seasons now and should have long settled into a suitable marriage. However, due to her father’s large debts, her only suitor is the persistent and odious owner of her father’s favorite gambling house. Meanwhile, Lord Julian Belfry, the second son of a marquess, has scandalized society as an actor and owner of a theater—the kind of establishment where men take their mistresses, but not their wives. When their lives intersect at a house party, Lord Julian hatches a plan to benefit them both.

With a marriage of convenience, Emily will use her society connections to promote the theater to a more respectable clientele and Julian will take her out from under the shadows of her father’s unsavory associates. But they soon realize they have very different plans for their marriage—Julian wants Emily to remain a society wife, while Emily discovers an interest in the theater. But when a fleeing actress, murderous kitten, and meddlesome friends enter the fray, Emily and Julian will have to confront the fact that their marriage of convenience comes with rather inconvenient feelings.

To Marry and to Meddle is the third standalone in the Regency Vow series, and it’s another fun, silly historical rom-com from Martha Waters. We’ve got a marriage of convenience between a theater owner and a respectable lady. They enter a mutually beneficial, unromantic marriage, but of course, meddlesome feelings develop. If you’re a fan of the series, you won’t want to miss this newest installment!

Lord Julian Belfry is the second son of a marquess who completely scandalized his family and society when became an actor and theater owner. Lady Emily Turner has been “on the shelf” for 6 seasons now and has yet to find herself a husband. Then her father’s debt collectors come to, well, collect and she has no choice but to marry and awful man. But when Juliana and Emily meet, they discover they both need something from the other and hatch a plan to save them – they’ll get married and she won’t have to marry a gambling house owner and he’ll have a wife that can help his theater bring in more respectable clientele. Neither of them expect to fall for each other… until they do.

Like the other 2 books in the series, the romance here is silly and over the top. Emily and Julian have plenty of banter and they work their way through uncharted waters that is their marriage of convenience. Emily adopts a kitten that causes so much havoc for Julian, which was great to see. The theater aspect was interesting, but the plot towards the end with Julian putting Emily on a pedestal was tiring to read. I do wish we got a little more chemistry between the main characters – I enjoyed the way the friendship developed, but wasn’t quite sold on the romance. Overall though, I had fun with Emily and Julian and their kitten from hell! 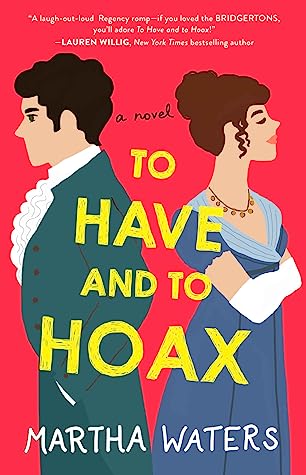 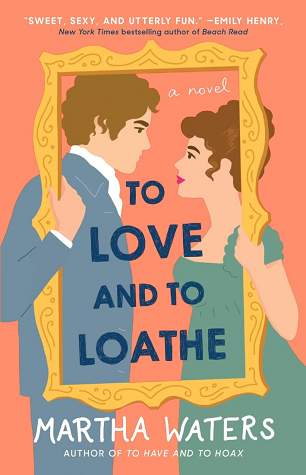