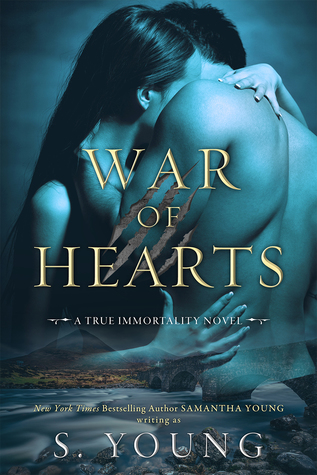 Thea Quinn has no idea what she is. All she knows is that her abilities have been a plague upon her life since she was a child. After years of suffering at the hands of a megalomaniac, Thea escaped and has been on the run ever since.

The leadership and protection of his pack are of the utmost importance to Conall MacLennan, Alpha and Chief of Clan MacLennan, the last werewolf pack in Scotland. Which is why watching his sister slowly die of a lycanthropic disease is emotional torture. When Conall is approached by a businessman who offers a cure for his sister in exchange for the use of Conall’s rare tracking ability, Conall forges an unbreakable contract with him. He has to find and retrieve the key to the cure: dangerous murderer, Thea Quinn.

Thea’s attempts to evade the ruthless werewolf are not only thwarted by the Alpha, but by outside dangers. With no choice but to rely on one another for survival, truths are revealed, intensifying a passionate connection they both fight to resist. At war with themselves and each other, Conall and Thea’s journey to Scotland forces them to face a heartrending choice between love and betrayal.

This was my first paranormal romance of Samantha Young’s and I really did enjoy it! PNR holds a special place in my heart so when I heard SY would be writing a new book in this subgenre, I was jumping for joy. And not only is it PNR, it’s SHIFTER PNR! War of Hearts dives us into a fantastic, new paranormal world that I’m really hoping we get more of. I loved the main characters (there’s even a scene where they’re forced to share a bed in a hotel) and even though the book wasn’t perfect, I definitely say give it a try if you love this author or PNR!

Thea Quinn is on the run from her abuser. She’s indestructible, has insane healing abilities, but doesn’t fit into the vampire/werewolf/witch/etc mold, and has no idea what she is. Conall MacLennan is the alpha of the Scotland werewolf pack, and in order to save his dying sister, he makes a deal to deliver Thea to a man in exchange for her healing blood. He’s told Thea is a lying, manipulative murderer, so why is it when he finds her and the more time he spends around her, the more he doubts that that’s who she is?

Thea and Conall are BADASS. Thea can kick ass like nobodies business – she’s had to learn to defend herself since being on the run for years. I also felt for her too. She’s been through so much awful things that you can’t help but hurt for her. As the alpha of one of the most powerful werewolf packs in the world, obviously Conall can hold his own too. He’s gruff and intense and 6 1/2 feet of gorgeousness. I loved all the action and fight scenes Thea and Conall get into. Samantha Young did a fantastic job at keeping you on the edge of your seat and glued to the pages with all the action!

As much as I loved Thea and Conall’s characters, I had some issues with the romance, particularly with the pacing of it. It’s pretty much non-existent for a good chunk of the first half of the book, except for some underlying chemistry. But that was fine, because I was loving the slow burn. But then the “oops, there’s only one bed in this hotel room” thing happened (which I’m a sucker for), and things moved at a warped speed. Yes, it is a fated mates kind of romance, which normally I love, but in this case I think it was a bit too fast for them to start saying “I love yous” so soon. Also, it was pretty obvious what Thea was pretty early on in the book. But I don’t know if it’s because I read a ton of PNR/fantasy romance?

Still, this is a solid read I would recommend if you love shifter romances. It’s full of action, with great main characters. We get to travel all across Europe along with Thea and Conall. We’re left with a little tease at the end and I do actually want more books from this world. I also have a feeling that many of SY’s contemporary readers will want to give this a try, and I say go for it!

Now here’s an excerpt from War of Hearts! ❤

Stepping back inside the motel room, Thea halted as Conall came out of the bathroom. His height caused a logistical problem for her next move.

Although his color hadn’t fully returned to normal, the wolf was looking much stronger. She didn’t know if she could take him in a fight when he was at full strength, which was more than a little concerning. As if he’d read her mind, he cut her an expressionless look. “You should have left me to die, lass.”

“Probably. I guess I’m just going to have to take the chance you were bluffing.”

He frowned and opened his mouth to question her, but Thea had already made her move.

Before he could comprehend it, she was on the bed behind him and reaching for his head before his weakened reflexes could catch up.

The crack of his neck echoed around the room, causing a sick lurch in Thea’s stomach.

For some reason, stupid tears stung her eyes as she watched his body hit the ground with an almighty thud. Why should she care? It wasn’t like he was dead. She’d knocked him out. For … however long he took to heal.

And he had stuck her with that goddamn injection.

Thea jumped off the mattress, avoiding Conall’s body. Earlier when she’d been treating his wounds, she’d spied the syringes in the first aid kit. Grabbing them, Thea hurried out of the motel room and toward the fields beyond. Quickly she dug a hole with her bare hands and buried the syringes. Hurrying back, she avoided staring at Conall because he looked very much dead.

She grabbed his wallet and as she took his money, leaving him his credit cards, a folded-up photograph caught her attention. Curiosity got the better of her and she pulled it out. Smoothing her fingers across the picture, she spotted who she thought was Conall only to realize it wasn’t. The man who looked like him was standing next to a much younger Conall, and Thea deduced it was his father. The younger Conall had his arm around the waist of a small, redheaded girl buried into his side. And beside the man she’d mistaken for Conall was a beautiful redheaded woman.

Was this Conall and his family?

They were standing on a rocky beach, a beautiful lake and mountains behind them.

Thea wondered which one of them was sick. Which of these people was he willing to sacrifice her for?

Memories of her own parents swelled in her throat, burning and screaming to get out. But Thea shoved them back down as she shoved the photograph into his wallet.

There were times she pulled those memories out and let herself swim in the pain because it was worth it to remember the happy moments.

But now was not the time.

With a ruthless supernatural sure to wake up from a broken neck wanting to kill her, and some unknown entity out there hunting her too, now was very much the time to go.

Samantha Young is a New York Times and #1 International bestselling author from Stirlingshire, Scotland. On Dublin Street was Samantha’s first adult contemporary romance series and has sold in thirty countries. She has since published over thirteen romance titles including the New York Times Bestsellers Into the Deep, Hero, and her most recent contemporary romance Fight or Flight. When writing Adult Paranormal romance she writes under the pen name S. Young.