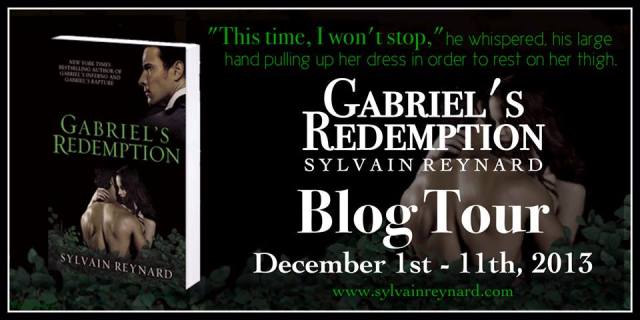 From the author of the New York Times bestsellers Gabriel’s Rapture and Gabriel’s Inferno comes the epic conclusion to the captivating romantic trilogy.

Professor Gabriel Emerson has left his position at the University of Toronto to embark on a new life with his beloved Julianne. Together, he’s confident that they can face any challenge. And he’s eager to become a father.

But Julianne’s graduate program threatens Gabriel’s plans, as the pressures of being a student become all consuming. When she is given the honor of presenting an academic lecture at Oxford, Gabriel is forced to confront Julianne about the subject of her presentation—research that conflicts with his own. And in Oxford, several individuals from their past appear, including an old nemesis intent on humiliating Julia and exposing one of Gabriel’s darkest secrets.

In an effort to confront his remaining demons, Gabriel begins a quest to discover more about his biological parents, beginning a chain of events that has startling repercussions for himself, Julianne, and his hope of having a family.

Gabriel’s Redemption was an absolute delight to read, and I thoroughly enjoyed the conclusion to Julia and Gabriel’s heartfelt, enchanting love story.

“For you, my love, I would endeavor to pluck the stars from the sky, only to shower them at your feet.”

This third and final book of the Gabriel series picks up a few months after Gabriel’s Rapture, and Gabriel and Julia are married. In the beginning, they’ve adjusted to married life pretty easily, dealing with Julia’s upcoming lecture and Gabriel’s new job. Julia’s graduate program brings her much stress, but her husband takes it upon himself to ease her, and he does so very well. Gabriel shows his love so thoroughly and completely, and yet sometimes he still can’t accept that he’s been given a chance at happiness.

In Gabriel’s Redemption, all of Gabriel’s anxieties and fears come to light. Gabriel still has demons from his past rearing their heads, and they strain his marriage. Julia and Gabriel are in love–there’s no doubt about this, but Gabriel’s past–his biological parents, his past drug use and drinking problem–all of his flaws are all he sees in his marriage. He wants to have a child with Julia, but he’s terrified he won’t make a good father.

But no matter how deep into the darkness Gabriel falls, his love for Julia holds him strong. They support one another, as a couple should, and their marriage solidifies and grounds their love. Gabriel goes through much emotional growth throughout the series, but especially once he’s married. He has to deal with his family history, finding out more about his biological father and his family, and he finally gets his answers.

There’s quite a bit of religious undertones in Gabriel’s Redemption, and I felt SR handled it with skill. Mostly, it’s of keeping faith and believing in redemption for Gabriel. He’s lost his way, and truly believes he can’t be redeemed, but Julia lights his way through the darkness. Gabriel’s journey toward happiness is so heartfelt and heart-wrenching, but I also loved how all of the secondary characters are dealt with too. We get a solid conclusion for Julia and Gabriel, as well as for Paul and Christa. Loose ends are tied up, and SR does it all with his gorgeous writing.

“I love you more now than I did before we were married.” Julia wore a contemplative expression. “Marriage is the strangest thing. Almost without realizing it, I feel as if our lives and our hearts became knitted together. I don’t know how it happened.”

The Gabriel’s Inferno series is an absolute must-read. It’s beautifully written, and Gabriel and Julia’s love story is one of the best I’ve ever read. Gabriel’s Redemption was a perfect conclusion to the series, and I was really happy with how the story played out.

I’m interested in the way literature can help us explore aspects of the human condition – particularly suffering, sex, love, faith, and redemption. My favourite stories are those in which a character takes a journey, either a physical journey to a new and exciting place, or a personal journey in which he or she learns something about himself/herself.

I’m also interested in how aesthetic elements such as art, architecture, and music can be used to tell a story or to illuminate the traits of a particular character. In my writing, I combine all of these elements with the themes of redemption, forgiveness, and the transformative power of goodness.

I try to use my platform as an author to raise awareness about the following charities: Now I Lay Me Down to Sleep Foundation, WorldVision, Alex’s Lemonade Stand, and Covenant House. For more information, see my Twitter account.