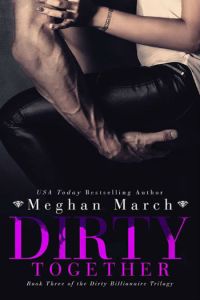 I love saying those words.

She’s mine, and if she thinks I’m going to let her run without tracking her down and bringing her back to where she belongs—with me—then she’s about to be introduced to a new reality.

Because I’ll fight dirty to give her the happily ever after she deserves.

The Dirty Billionaire Trilogy wasn’t quite what I expected, but I enjoyed it for the most part. There has been plenty of scorching-hot scenes to love and one especially alpha hero I’ve come to really have a soft spot for. While the main characters themselves have been a lot of fun to read, the plot of the trilogy was weak in comparison. So there are good and bad parts to the series, and even though I didn’t love this conclusion to the series, I was entertained the whole way through.

“You don’t get it, Holly, and I’m not going anywhere until you do.”
“Get what?”
“That you’re the most important thing in my life now.”

This is the first time in the series where I loved BOTH Creighton and Holly. Creighton has learned from his mistakes and is no longer that unreasonable, arrogant, domineering man, but rather a husband who puts his wife first in all things now. I seriously swooned at all the wonderful things Creighton says and does for Holly to prove she’s his number one priority. And Holly herself has learned to stop running away when things get difficult. They have something worthwhile between them, and for the first time, the two of them are going to fight for their marriage and stick by each other.

This final installment went by too quick for me to really appreciate all the changes in Creighton and Holly though. I was also really hoping on more plot development, but the author mainly focused on character growth. I would’ve enjoyed this book the most out of the series, but the small twist at the end kind of came out of nowhere and threw me off. I loved the way the sweet romance ended, but plot-wise, I wasn’t a fan of the ending.

Still, even with the problems I had with Dirty Together, Creighton and Holly were truly an enjoyable couple to read about. They’ve come a long way since they first met each other and had their one-night-stand, and fans of the series will no doubt adore their happy ending.

6 thoughts on “ARC Review: Dirty Together by Meghan March”