Welcome to today’s stop on the blog tour for Rough Rhythm by Tessa Bailey!

Band manager James Brandon never expected to find the elusive satisfaction he’d been chasing, let alone stumble upon it in some sleezy Hollywood meat market. Yet the girl’s quiet pride spoke to him from across the bar, louder than a shout. Troubled, hungry and homeless, she’d placed her trust in him. But after losing the grip on his dark desires that one fateful night, James has spent the last four years atoning for letting her down.

This time I’ll finally crack him.

Rock band drummer Lita Regina has had enough of James’s guilt. She wants the explosive man she met that night in Hollywood. The man who held nothing back and took no prisoners—save Lita. And she’ll stop at nothing to revive him. Even if it means throwing herself into peril at every turn, just to get a reaction from her stoic manager. But when Lita takes her quest one step too far, James disappears from her life, thinking his absence will keep her safe.

Now it’s up to Lita to bring James back…and ignite an inferno of passion in the process.

Holy WOW. Tessa Bailey sure knows how to pack a punch in a novella. I’d been dying to read Lita and James’ story after meeting them in Crashed Out, and boy did they not disappoint. This novella is hot, hot, hot! In typical Tessa Bailey fashion, Rough Rhythm is a dirty, passionate, exhilarating read. It’s got characters that are raw, gritty, and a little rough around the edges, but you love them anyway. I honestly wish this could have been longer, because I never wanted to stop reading about Lita and James. If you’re looking for a fast-paced, sexy AF read, Rough Rhythm is definitely for you.

“All this time, you’ve treated me like a protector.” He pushed her thighs open. “But I was the one you should have been afraid of.”

For the past four years, rock band drummer Lita has been trying to release the passion and control her band manager James has been holding within him and unleash the the dark side of him that gave her the best night of her life the night they met. But even though Lita wants him to do all the filthy things he did to her during that one night stand, James can’t help but regret the way he lost control over her. He would never want to taint Lita with his darkness, but that doesn’t stop him wanting her more and more each day that passes. Their hearts linked because of that night, and you can feel the longing and love they have between them, they way they belong to and with each other. Can James accept Lita in his bed again when she already resides in his heart? Or will he forever be on the sidelines, always looking but not touching?

How could he feel such protectiveness for Lita and want to dominate her in such a way? It was a though his two urges went hand in hand. Protect and punish. Cherish and… imprison. Keep her still and make her take.

Emotionally-charged, tension-filled, angsty, and downright dirty, Rough Rhythm is another winner from one of my all-time favorite authors. Tessa Bailey is the queen of dirty talk – somehow she manages never to make her heroes repetitive and their dirty talk is new and erotic as ever with every new read. Rough Rhythm is a little darker than your typical Tessa book but it totally WORKS, and I was fanning myself more than I usually need to when I read her books. I utterly adored James and Lita, and I loved the way their romance played out. I was hooked onto this novella from beginning to end, and I can’t recommend it enough for those who love their sexy reads!

“I live for you. You’re not just in my thoughts, you are my thoughts. Every single one. And somehow, I lived for you all wrong. I should have been living with you. Not only for.”

“You came along at an unfortunate time, Lita.” His head gave a tight jerk, jaw clenching. “I haven’t been feeling like myself.”

“Really.” She set the donut down, her stomach executing a series of flips. Nervous ones, but not the type that made her want to run. Not the type she’d experienced before. These were hotter, fuller, curious. “How do you feel…instead?”

“I have hunger.” His dark gaze swung up, gluing her to the plush, leather seat. “I don’t know if it can be fed like yours.”

What was going on here? Lita felt almost hypnotized, lured in by his rasping, cultured voice. She recognized interest and arousal in men, had it directed at her often, but this? This was utter famishment. He reminded her of a vampire who’d been in hiding from the sun, unable to hunt. And now a deer lay before him, vital and tempting, life flowing through its veins. She was the deer.

Man. How crazy were her thoughts right now? The lack of food must have gone to her head. After the trouble she’d just escaped, she shouldn’t care what went on under another man’s surface. Shouldn’t allow this odd, instantaneous attachment to take hold.

The fuller her stomach became, though, the more her thoughts cleared. The more of James she saw. His interest in her, as he watched her mouth chew, was almost as thick as the leash around his neck, keeping him in place. If the lights in the room weren’t so dim, she could probably make it out. Strain bracketed his masculine mouth and he appeared to be swallowing golf balls down the column of his powerful throat. One…after…another.

“How did you get so hungry?” James asked, his tone suggesting he was reclining back onto a bed of nails.

Lita rejected the outside ugliness from entering the room. “I could ask you the same thing.” Her legs were steady as she stood and rounded the table, compelled by some force she couldn’t deny. Maybe it was his clear attempt to restrain himself, to fight the attraction so obvious between them. She stopped beside James, but he stayed still as stone. “I’m full. What happens now?”

His eyelids drooped, fist mashing against his forehead. “Go.”

That single, tortured word caught her in the chest. God, he was holding back so much. What would happen when it roared out?

Why was she trembling with the need to find out?

There was danger lurking beneath this man’s surface. Also known as the last thing a homeless girl wanting to turn her luck around needed.

Too bad danger was the only thing that had ever made her feel alive.

Lita walked past James to the lamp and flipped off the gentle light, before returning to his tense figure, sliding between his outstretched legs…and opening the robe. “Feed yourself.”

The air crackled as James stood slowly, so slowly, rising to his full height. When Lita glimpsed his changed expression, she realized that—at her invitation—a change had snapped through him like a cracking whip, despite the way he rose without hurry. The vampire’s dirt nap had officially ended and the invisible leash was no more. Power rippled over his beautiful body as it pressed close, a hand finding her hip inside the robe, squeezing, his mouth sliding against her ear.

His breath went choppy after issuing a single unexpected command. 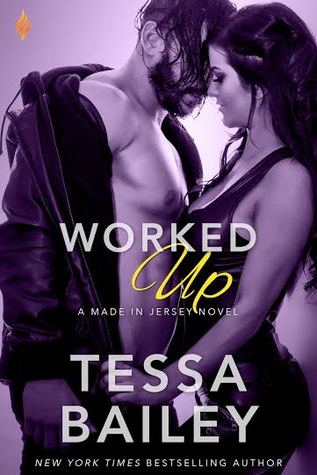 Tessa Bailey is originally from Carlsbad, California. The day after high school graduation, she packed her yearbook, ripped jeans and laptop, driving cross-country to New York City in under four days. Her most valuable life experiences were learned thereafter while waitressing at K-Dees, a Manhattan pub owned by her uncle. Inside those four walls, she met her husband, best friend and discovered the magic of classic rock, managing to put herself through Kingsborough Community College and the English program at Pace University at the same time. Several stunted attempts to enter the work force as a journalist followed, but romance writing continued to demand her attention. She now lives in Long Island, New York with her husband of eight years and four-year-old daughter. Although she is severely sleep-deprived, she is incredibly happy to be living her dream of writing about people falling in love.