Welcome to today’s stop on the review tour for Wednesday by Kendall Ryan! 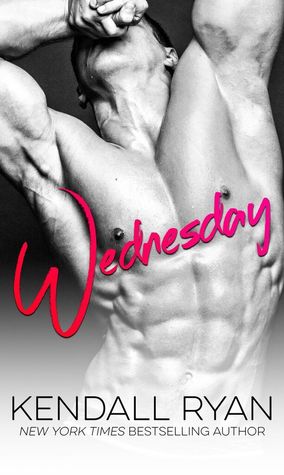 It’s not what I really want, but it’s all he has to offer. He’s filled with turmoil and heartache and regrets, but for two hours every Wednesday all he feels is me. How much I desire him, how desperate he makes me, how much I’d like things to be different between us. Real.

He used to be my best friend back before he got married. And now? Now, he’s a young widower. It’d be wrong on so many levels to expect something more from him. So I give him what he needs. Dark delicious fucking. But I know I can’t keep this up. I’ve already given him my body, my soul. I want him to have my heart. It might drive him away forever, but that’s a risk I’m forced to take.

Wednesday is an angsty romp told from dual points of view. If you’re in the mood for something quick and dirty, you’ve found it. Proceed at your own risk.

Okay, this one is short and HOT! A little too short for my taste, but Wednesday is definitely the perfect smutty read if you’re in need of a quickie. This is actually the first book I’ve read by Kendall Ryan, but now I know why everyone thinks she writes some steamy reads. She gets seriously down and dirty in Chloe and Shaw’s novella! I liked it, but I would’ve preferred something longer and more fleshed out.

He was my drug. Bold. Intoxicating. Addictive.

Wednesday is a friends-to-lovers romance between Shaw, a grieving widow, and Chloe, who’s had a crush on Shaw for as long as she’s known him. After the death of Shaw’s wife, Chloe lets Shaw fall into his grief and use her – for sex. Every Wednesday, he goes over to her house a rough, raw, long ride. It’s wrong, taboo… but why does it feel so right between them?

My drug of choice was my best friend, naked and writhing beneath me. Did that make me a monster? Maybe.

Soooo basically, this was smutty novella to the max. The chemistry is hot and there’s plenty of dirty talk, but I did find myself frustrated with Chloe and Shaw – Chloe for being too passive with Shaw, Shaw for using Chloe and not really SEEING her until the last moment – but their romance wraps up pretty sweetly and cheesily. I still enjoyed this read – it’s fun, quick, and did I mention, HOT? If you’re a fan of short, dirty reads, this one’s definitely for you. 😉

A New York Times, Wall Street Journal, and USA Today bestselling author of more than a dozen titles, Kendall Ryan has sold over 1.5 million books and her books have been translated into several languages in countries around the world. She’s a traditionally published author with Simon & Schuster and Harper Collins UK, as well as an independently published author. Since she first began self-publishing in 2012, she’s appeared at #1 on Barnes & Noble and iBooks charts around the world. Her books have also appeared on the New York Times and USA Today bestseller lists more than three dozen times. Ryan has been featured in such publications as USA Today, Newsweek, and InTouch Magazine.