These Royals will ruin you…

From wharf fights and school brawls to crumbling lives inside glittery mansions, one guy tries to save himself.

Reed Royal has it all―looks, status, money. The girls at his elite prep school line up to date him, the guys want to be him, but Reed never gave a damn about anyone but his family until Ella Harper walked into his life.

What started off as burning resentment and the need to make his father’s new ward suffer turned into something else entirely―keep Ella close. Keep Ella safe. But when one foolish mistake drives her out of Reed’s arms and brings chaos to the Royal household, Reed’s entire world begins to fall apart around him.

Ella doesn’t want him anymore. She says they’ll only destroy each other.

Secrets. Betrayal. Enemies. It’s like nothing Reed has ever dealt with before, and if he’s going to win back his princess, he’ll need to prove himself Royally worthy.

After that god-awful cliffhanger from Paper Princess, I was literally dying to get my hands on Broken Prince. I had so many hopes and expectations for this book, things mainly concerning Reed, and Erin Watt did not disappoint. If you can believe it, in this sequel things get even wilder and intense for Ella and the Royals… so you’re in for a hell of a ride when you pick up Broken Prince. It’s seriously a fantastic follow-up to one of my favorite books of the year – and if you’ve read Paper Princess, you need to get your hands on the sequel!

From the moment she walked in the door, all big eyes and guarded hope, I couldn’t keep away.
My instincts had screamed at me that she was in trouble. My instincts were wrong. She wasn’t trouble. I was. Still am.
Reed, the destroyer.
It’d be a cool nickname if it wasn’t my life and hers that I’m taking down.

My favorite thing about Broken Prince? Reed’s POV!!! I was so thankful that we get Reed’s POV, because I was dying to get in his head and figure out where his heart lay in terms of Ella and even his family. I don’t want to spoil anything from Paper Princess, but if you’ve read the first book, then you know Reed has a lot to make up for in Broken Prince. He’s broken Ella’s trust, but he’s determined to do whatever it takes to earn her forgiveness and win her back. I wasn’t 100% in love with Reed in book 1, but I can say without a doubt that I’ve completely fallen head over heels for him in book 2. His love for Ella shines so brightly in this book – my heart couldn’t stop swooning because of him!

“I’m done playing games, Ella. No other girls exist in this world for me. If you see me talking to one, know that I’m talking about you. If you see me walking next to someone, I’m wishing it was you.” He steps toward me. “You’re the only one for me.”

But of course, you can’t have the Royals without some messed up shit going on. There’s drama with Brooke. Callum, the Royal father. Easton and his self-destructive tendencies. Gideon and his mysterious secrets. Mean girls at prep school. Ella and Reed just can’t catch a break – they have to deal with all of that on top of fixing their rocky relationship. There is so much drama and not enough resolution that I nearly wanted to scream! Broken Prince left me with more questions than answers – and I can only hope that all will be revealed in the next and final book.

…that girl flew into our hose like a whirlwind and made everything come alive again. She brought steel and fire. She made us laugh again. She gave us a purpose—at first, it was us uniting against her. Then it turned into us standing beside her. Protecting her. Loving her.

The thing about this series that has me thinking about it again and again is how there is still so much we have to uncover about the Royals and all the people they’re involved with. There are secrets on top of secrets. Lies that you know will catch up with them sooner or later. These characters… they are truly unforgettable. I may not have loved Broken Prince quite as much as Paper Princess, but it’s still a fantastic read I couldn’t put down. I pretty much devoured it from the second it appeared on my kindle. Fair warning though, this also has an epic cliffhanger at the end. Twisted Palace can’t get here soon enough! I can’t wait to see where Erin Watt will take us next with the Royals – and is it too much to ask for stories about the rest of the Royal brothers? 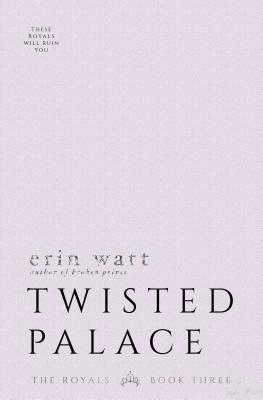