Too Wild to Tame by Tessa Bailey
Series: Romancing the Clarksons #2 (full reading order below)
Publication Date: September 6th 2016
Links: Ebook • Paperback • Goodreads
Source: I received an ARC from the publisher in exchange for an honest review

By day, Aaron Clarkson suits up, shakes hands, and acts the perfect gentleman. But at night, behind bedroom doors, the tie comes off and the real Aaron comes out to play. Mixing business with pleasure got him fired, so Aaron knows that if he wants to work for the country’s most powerful senator, he’ll have to keep his eye on the prize. That’s easier said than done when he meets the senator’s daughter, who’s wild, gorgeous, and 100 percent trouble.

Grace Pendleton is the black sheep of her conservative family. Yet while Aaron’s presence reminds her of a past she’d rather forget, something in his eyes keeps drawing her in. Maybe it’s the way his voice turns her molten. Or maybe it’s because deep down inside, the ultra-smooth, polished Aaron Clarkson might be more than even Grace can handle . . .

Has there been a Tessa Bailey book I haven’t enjoyed!? I think not. I’ve been loving the two Romancing the Clarksons books (but I have a feeling the next two will be the ones to SLAY ME) and already I want more! Rita Clarkson got her HEA in the previous book, and now it’s Aaron’s turn. But this man doesn’t fall for a well-mannered girl who would fit his politician persona – instead, Aaron falls head over heels for a hippie… and the daughter of a senator.

“Moments, Aaron. This is one of them. Come live in it with me.” She brushed some snow out of his hair, soft fingertips grazing his ear. “Please?”

Aaron is the classic politician – perfectly coifed, put together, and well, a little fake. His entire career, he’s been putting on a persona that he doesn’t even recognize anymore. And now that his career is in jeopardy, he’s got to do everything he can to salvage it, because if he’s not a politician anymore, who is he? But the one thing standing in his way of succeeding is the one girl who’s capable of turning him inside out, who happens to be the daughter of the man he’s working for.

Grace Pendleton is the black sheep of the family. She’s not the typical politician’s daughter – instead, she acts out for what she believes in, almost always making trouble for her senator father to cover up. Grace is free-spirited and full of life, but she’s also got scars from her past that she doesn’t let bring her down. I adored Grace. She was a heroine I totally felt for, and wished was real so I could know her in real life. Her free nature and wild spirit is a little inspiring, and it’s those exact things that drew Aaron to her. Their chemistry is just as wild as Grace is, and despite how much Aaron tries to resist, he can’t. But he’s still got walls around his heart that won’t let him be all in with the one he wants – so can Grace break them down or will he lose the best thing that’s ever happened to him?

Aaron and Grace brought out all the heartache and swoons in me. I was hooked onto their romance, and for once I wasn’t too frustrated with the back and forth and ups and downs between them. Their struggles felt honest and real to me, but what made it better was all the support they had from the rest of the Clarksons (and Sage, who I’d say is an honorary Clarkson anyway). I loved getting to know more about Peggy, Belmont, and Sage, and to say I need their stories ASAP would be an understatement. Tessa Bailey knows how to hype up her readers, because I’m DYING to get my hands on Peggy’s book now! April can’t get here soon enough. 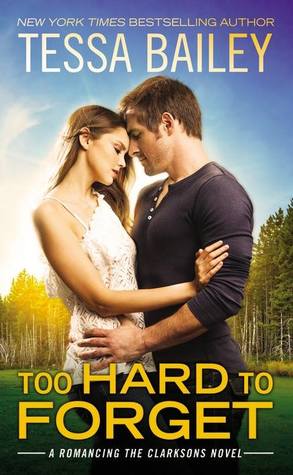