Welcome to today’s stop on the audio tour for Lucian by Bethany-Kris! 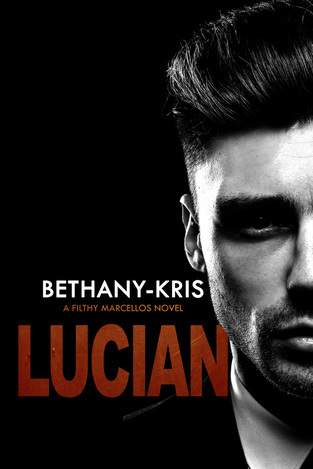 Lucian Marcello is aware of the expectations following him as the oldest son of one of North America’s most infamous Cosa Nostra Dons. Family in his world is more than blood and sharing a last name. It’s the honor, respect, business, and the life. Being a Capo is just a stepping stone until it’s time for him to take on the role of underboss but a chance meeting with her could be the one thing he’d risk it all for.

She is exactly what he didn’t know he was looking for.

Jordyn Reese spends her time trying to stay under the radar of a man who wouldn’t think twice about killing her. Unwillingly affiliated with a dangerous MC gang, her life is dominated by the men surrounding her and her future rests solely in how useful she can be for them. The last thing she needs is some Mafioso gaining her more unwanted attention from the club.

He is everything she should stay away from but can’t.

Notoriously violent when it comes to getting what he wants, Lucian will stop at nothing to make the target on Jordyn’s back disappear. But sometimes the worst threats are the ones you can’t see until it’s too late. The truth behind Lucian’s history is about to take center stage in more ways than one, and it’ll either save him or kill him.

This world leaves everyone a little filthy.

It’s been a while since I dived into mafia romance, but Lucian was a great way to get back into one of my favorite kinds of romances! It was an intense, surprisingly sweet, audiobook I enjoyed listening to. The narrator did a great job of getting into the voices, especially those of the mafia. I would definitely recommend this to audio fans who love mafia romances on the lighter side.

Lucian is the oldest adopted son of the Marcellos, his father being the most powerful and dangerous of the Cosa Nostra Dons. He’s being prepared to take over his father as the underboss – and everything would go smoothly until he comes across a beautiful woman on the run from a deadly MC gang. Lucian takes it upon himself to get involved and save Jordyn, thus getting his mafia family involved as well. Jordyn soon becomes something precious to him that he won’t let go of – so how far will he go to protect her?

Lucian is an alpha hero through and through – but he was surprisingly more sweet than I expected. He dotes on Jordyn, would do anything for her and to protect her. Jordyn has had a rough life and can protect herself, though she does make some idiotic decisions that undermine her intelligence. Their romance is sweet, though I never really felt the connection between them or the chemistry. There was no spark, but that in no way means I didn’t enjoy their story, because I did! The mafia aspect was what shined in this book – I’d definitely say to give this a try if you like mafia romances.

The narrator, John Thrust, did a great job of narrating this book, especially with his slight accent that made the mafia part feel more authentic. If the other books in the series become audiobooks, I would definitely hope he continues narrating!

Here’s an audio excerpt from Lucian!

Bethany-Kris is a Canadian author, lover of much, and mother to three young sons, one cat, and two dogs. A small town in Eastern Canada where she was born and raised is where she has always called home. With her boys under her feet, snuggling cat, barking dogs, and a hubby calling over his shoulder, she is nearly always writing something … when she can find the time.

To keep up-to-date with new releases from Bethany-Kris, sign up to her New Release Newsletter here: http://eepurl.com/bf9lzD