The New York Times bestselling author of the On Dublin Street series returns to Hartwell, Delaware—the perfect place to get away from it all, and find what you never knew you needed….

Bailey Hartwell has many reasons to feel content—her successful business, a close circle of friends, and her steady boyfriend…even if their romance feels staid after ten years without a serious commitment. The only challenge in her life comes in the form of sexy businessman Vaughn Tremaine. She thinks the ex-New Yorker acts superior and that he considers her a small-town nobody. But when Bailey’s blindsided by a betrayal, she’s shocked to discover Vaughn is actually a decent guy.

Vaughn admires Bailey’s free spirit, independence, and loyalty. As his passion for her has grown, his antagonism toward her has only worsened. Every little thing Bailey does seduces him. But when Vaughn’s painful emotional past makes him walk away in fear he will hurt her, it opens an old wound in Bailey, and she uncharacteristically retreats.

Once Vaughn begins to realize he’s made the biggest mistake of his life, he has no choice but to fight like he’s never fought before to convince Bailey that the love they’ve found together only comes around once in a lifetime….

After being introduced to Bailey and Vaughn in The One Real Thing, I had such high hopes for their story – their banter, their chemistry, and the love-to-hate-you vibes had me READY for their book. TORT wasn’t my favorite Samantha Young book, so I was still hesitant to see how she would continue this small-town romance series, but she really stepped up her game in Every Little Thing. This was the book that I had been waiting for when she announced her new series, and I have to say that I’m completely in love with Hartwell and its inhabitants now. If you love close-knit towns, slow burns, and enemies to lovers in your romances, you definitely want to give Every Little Thing a try!

The man I thought I might have been waiting for my whole life.
All this time he’d been standing right in front of me, wearing a suit and a sexy-ass smirk.

After her boyfriend of ten years cheats on her, Bailey is left floundering, unsure of what to do as a thirty-four year old single woman. She had dreams of being married, having the husband and kids, but all of that is up in the air now. But she finds the strength in herself to recognize that she’s an incredible, sexy, independent woman who owns the town inn, has great friends, and is capable of winning any man she wants. But the only man she does want these days is a man she doesn’t even like – Vaughn Tremaine, a rich businessman who breezed into town a few years ago and seems to have made Hartwell his home. Bailey and Vaughn got off on the wrong start, and their relationship has only nosedived from their. They can’t seem to see each other without insulting each other – but when Vaughn ends up saving Bailey one night, she decides to seduce the gorgeous man to see what’s really underneath his cold exterior.

He loved Bailey Hartwell, and it was time to decide whether he could push past his own fears and take what he wanted, or finally let go.

To say Vaughn has issues would be an understatement. He’s a commitment-phobe, and as much as he wants Bailey, as much as he LOVES her, he can’t give her what she wants – the happy family – because he knows he’ll just hurt her in the end. It takes him a while to realize that Bailey Hartwell just might be the best thing that ever happened to him, and it’ll take him a hell of a fight to win her heart. But Vaughn is nothing if determined to win the woman he was meant for.

I adored Every Little Thing SO much! The small-town vibes were absolutely perfect here – Samantha Young did an incredible job of bringing Hartwell to life. Bailey and Vaughn had the most delicious enemies-to-lovers romance – they love to hate and hate to love each other. There’s a little angst, some jealousy, a mountain of chemistry that can’t be ignored, and underneath it all, a love that was slow to grow but once it did, it grew to epic proportions. Every Little Thing was a lovely read. I’m so invested in the story and characters now, and I’m hoping there will be so many more books in the series! 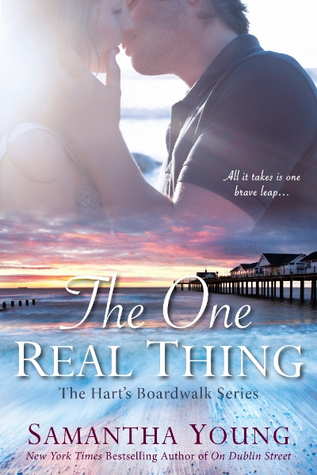 One set of the ON DUBLIN STREET series by Samantha Young! (Open Internationally)
One winner will receive all six print titles:
On Dublin Street, Down London Road, Before Jamaica Lane, Fall from India Place, Echoes of Scotland Street, and Moonlight on Nightingale Way!