The first stand-alone novel in A.L. Jackson’s brand-new Fight for Me series is coming October 2nd! 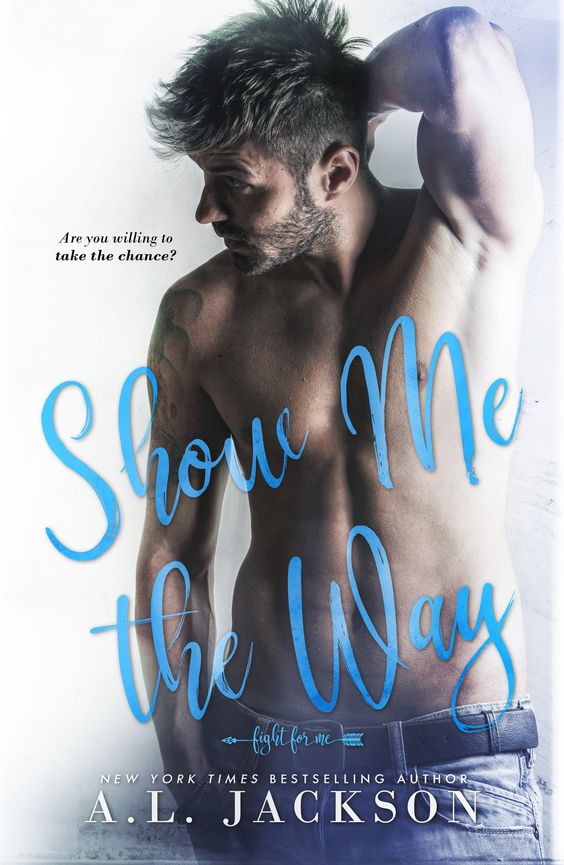 Show Me the Way by A.L. Jackson
Series: Fight for Me #1 (full reading order below)
Publication Date: October 2nd 2017

Rex Gunner. As bitter as he is beautiful.

The owner of the largest construction company in Gingham Lakes has been burned one too many times. His wife leaving him to raise their daughter was the last blow this single dad could take. The only woman he’ll let into his heart is his little girl.

Rynna Dayne. As vulnerable as she is tempting.

She ran from Gingham Lakes when she was seventeen. She swore to herself she would never return. Then her grandmother passed away and left her the deed to the diner that she once loved.

When Rex meets his new neighbor, he knows he’s in trouble.

She’s gorgeous and sweet and everything he can’t trust.

Until she becomes the one thing he can’t resist.

One kiss sends them tumbling toward ecstasy.

But in a town this size, pasts are bound to collide. Caught in a web of lies, betrayal, and disloyalty, Rex must make a choice.

Will he hide behind his walls or will he take the chance . . .

Buy Links:
Be notified of LIVE RELEASE on Amazon: http://smarturl.it/liveonamzn

Now here’s an excerpt from Show Me the Way! ❤

Dropping my head, I started for the door, unsure if I was cowering or if I was just staggered by what I’d unwittingly forced my way into. I felt like a fool. Naïve and reckless. Because I’d come seeking something I hadn’t understood.

And I’d just stumbled into the awareness that their lives were pieced together precariously.

It would only take one misstep to send everything toppling over.

I reached for the latch when I felt the flurry of intensity rise up behind me, the tension suffocating, the movement stealing the air from the room.

I spun around, my back plastered to the door as he approached.

He wasn’t touching me.

He rested a hand on the door above my head, his face dipping toward mine, his words a breathy grunt at my ear. “What the fuck do you think you’re doing to me, Rynna?”

Lust and confusion trembled through my bones, this man pushing me away and then drawing me closer.

I thought maybe neither of us could ignore it.

Because the fever in my veins ignited a fire in my belly.

No words would form on my tongue.

“Tell me, Rynna. What do you want with us?” he murmured, low and rough. “Because I don’t have anything to offer you, and I won’t let you take anything else from us.”

I attempted to process what he said, what he meant.

But I couldn’t focus. Couldn’t see. Could feel nothing but the heat radiating between us.

I gasped a breath, and he inched closer, a single knee wedging between my legs. He set both hands on the door above my head.

A desperate sound rumbled through the strength of his chest.

A hand was suddenly on my jaw, thumb under my chin, tipping my face up to meet the ferocity in his gaze.

Rage and restraint and desire. I couldn’t decipher what was happening. The push and the pull. The hatred and the need.

Reading Order: Fight for Me series

A.L. Jackson is the New York Times & USA Today Bestselling author of contemporary romance. She writes emotional, sexy, heart-filled stories about boys who usually like to be a little bit bad.

Her bestselling series include THE REGRET SERIES, CLOSER TO YOU, and BLEEDING STARS novels. Watch for A.L. Jackson’s upcoming novel, SHOW ME THE WAY, the first stand-alone novel in her brand-new FIGHT FOR ME SERIES.

If she’s not writing, you can find her hanging out by the pool with her family, sipping cocktails with her friends, or of course with her nose buried in a book.

Be sure not to miss new releases and sales from A.L. Jackson – Sign up to receive her newsletter http://smarturl.it/NewsFromALJackson or text “aljackson” to 24587 to receive short but sweet updates on all the important news.

Five signed copies of SHOW ME THE WAY

3 thoughts on “Cover Reveal + Excerpt & Giveaway: Show Me the Way by A.L. Jackson”