A second chance doesn’t guarantee a touchdown in this new contemporary romance from the author of Intercepted.

Single-mother Poppy Patterson moved across the country when she was sixteen and pregnant to find a new normal. After years of hard work, she’s built a life she loves. It may include a job at a nightclub, weekend soccer games, and more stretch marks than she anticipated, but it’s all hers, and nobody can take that away. Well, except for one person.

T.K. Moore, the starting wide receiver for the Denver Mustangs, dreamt his entire life about being in the NFL. His world is football, parties, and women. Maybe at one point he thought his future would play out with his high school sweetheart by his side, but Poppy is long gone and he’s moved on.

When Poppy and TK cross paths in the most unlikely of places, emotions they’ve suppressed for years come rushing back. But with all the secrets they never told each other lying between them, they’ll need more than a dating playbook to help them navigate their relationship.

I was a huge fan of Alexa Martin’s debut novel, Intercepted, so when I heard she’d be writing more stories for the Denver Mustangs football team, I was ecstatic. And even more so when I discovered Fumbled would be a second chance romance, which is my go-to romance trope. Alexa Martin did not disappoint with this second novel – I love the way she writes tough, independent heroines, and the heroes who will do anything for them!

Poppy Patterson is a single mother whose life revolves around her beloved son. She’s worked hard to provide for them both, and she couldn’t be prouder of Ace. She’s built a good life for the two of them, but when her high school sweetheart, and the man who got her pregnant, shows back up in her life, all of the feelings she thought she’d moved on from come crashing back. She wants her son to have his father in his life, but will she be able to protect her heart from TK Moore this second time around?

TK is living the football dream he’s always wanted for himself. There’s just one thing missing, and he realizes what it is when he discovers Poppy and Ace – his family. There are secrets that need to be aired out, but bottom line, TK wants to be a part of his family’s life. Where Poppy is rightfully wary and hesitant to restart their relationship, TK goes all in with helping and providing for his family. He’s determined to win Poppy’s heart, and being the big sweetheart that he is, Poppy has no chance of guarding her heart from him.

While I liked TK, Poppy was what made the story for me in Fumbled. I admired the hell out of this woman, who created an amazing life for her and her child on her own. She’s smart, funny, head-strong, and an incredible mother. I was also impressed with the way the author chose to portray football, which is not always about money and glory. Poppy knows the dangers and risks that come with this professional sport and has important discussions with TK and Ace about it.

Fumbled is another fantastic sports romance from a romance author who knows how to write, and write well. There’s a good setup within this book for the next couple in the Playbook series, and I can’t wait to get my hands on it! 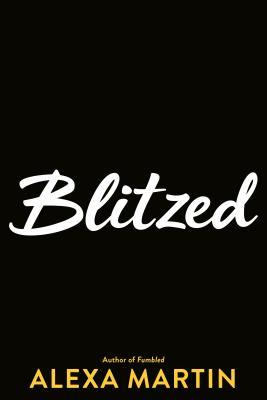